HuttBall is a ball sport where you pass between players to score a goal.

A violent new sport captivates the crowd of Nar Shaddaa, the smuggler's moon. Sponsored by the famous Giradda the Hutt, the "Huttball" is a fierce competition in which the greatest heroes of the galaxy, eager for fame and fortune, compete against each other.

In Huttball, two teams face off in the deadly compound of the "Arena", a place unlike any other in the galaxy! The teams compete for control of a ball that appears in the center of the Arena. The player in possession of the ball must run, pass the ball to his team-mates and try to make it cross the opponent's goal line by any means possible, while colliding with the opposing team and avoiding fire traps, acid and anti-gravity that dot the ground. The team with the most points wins the match.

Si Republic and Empire players can compete in the Arena, Huttball also allows teams from the same faction to fight in player versus player competitions.

A map, produced by the Ranhyd Wiki, shows the details of the Huttball map: 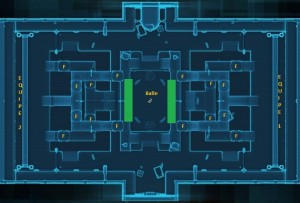 The teams start on each side and must bring the ball into the opposing court to score a point.

Be careful though, there are many pitfalls. The "F's" represent flame traps. They will go out sometimes, allowing you to move on. Be especially careful not to find yourself stuck in it otherwise death is guaranteed. In the center, in green, you have acid bins. They hurt but are not as deadly as fires. It is better not to dip in it on the other hand, it tingles anyway.

Between the areas of acid, it is the area of ​​the appearance of the ball! Where you have to rush at the start of the match or come back to it if the ball is put back into play after a goal.

The game ends either after 6 goals scored or after 15 minutes. Medals are earned by passing passes, healing comrades, scoring goals and defeating enemies. 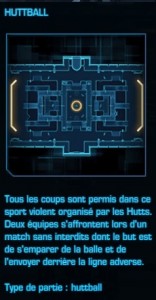 Currently, there are several strategies to combine to surprise the opponent and score:

The Consular / Inquisitors are clearly the top scorers: they have a skill of sprint who can make a difference early in the game and can switch to stealth mode. Healers should be careful to keep the entire small group alive, with the wearer first. As much as possible, it is always good to have one of the other potential carriers within range so that you can keep the ball when the first carrier dies. It is essential to spin the ball as much as possible in order to change the focus of the opponents and create confusion.

If you are feeling overwhelmed, anticipate and defend your goal line. Watch out for the Sith Warriors and Jedi Knights who can use their leap on you to score! It is important to stop the enemy carrier and the strategy to adopt depends on its class: sometimes it will be better to kill the healer first and control the carrier but if the carrier is already low on health, it may be better. deal with it first. If you get the ball, get it to safety as quickly as possible by throwing it back to the middle.

SWTOR - The Golden Age of the Sith