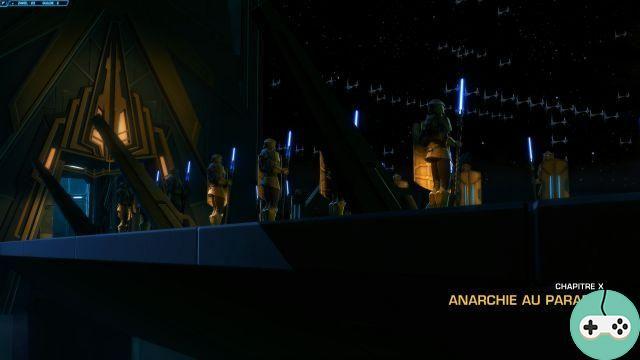 After our flight and the start of our installation on Odessen, Vaylin returns empty-handed to Arcann on the Eternal Fleet. The latter is angry with the failure of our capture and reveals his new project to obtain information: bombard random planets to get an informant out by fear. 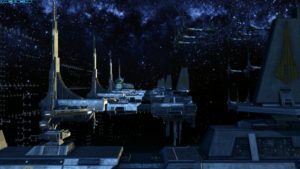 On our side, Theron informs us that he has a new potential recruit: the Troublemaker. The latter has already done a lot of damage to Zakuul and even though she is considered a terrorist, having her on our side could be of great help. So we ask Scorpio to use his blanket under the Lady of Sorrows name to bait this mate. 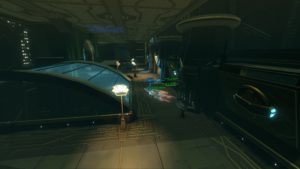 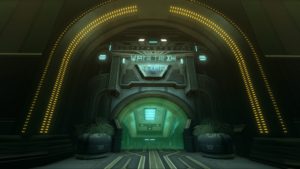 We go to Zakuul and go down to the slums of the city. A first wave of skytroopers seems to have spotted our contact and we must then eliminate them. First, a few skytroopers generously offer themselves one by one after the first pack, then their commander, Towen Sor, becomes our opponent after progressing a few meters. 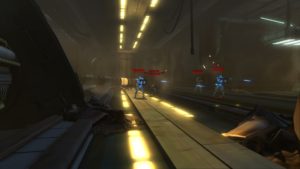 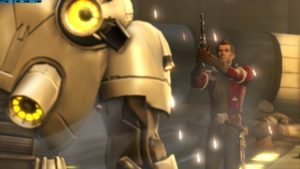 He has three abilities. The first is a circular damage zone that we need to get out of quickly. The second is a suppressive shot that must be interrupted or suffer very high damage (which seems to be able to be reflected). The third is a net that will slow us down or block us in our position. If the damage from this last spell is less, Towen Sor will chain them very quickly, so it's best to stay on the move and dodge them as much as possible.

Once this difficulty is overcome, we meet the Trublionne who is none other than Kaliyo djannis. She quickly realizes that we do not have the explosives promised by the Lady of Sorrows to attract her and, avoiding confrontation with the hope of obtaining them, she asks us what brings us. We reveal to him that certain information in his possession interests us, in particular on the arrow. She then offers us a market: supporting her in her work to find out more. So we follow her back to the old world and Theron goes back to her business during this time. 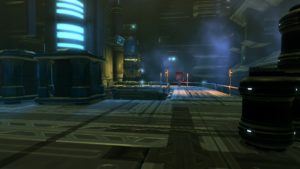 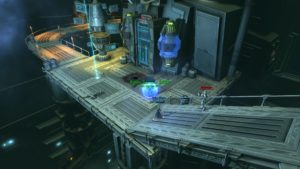 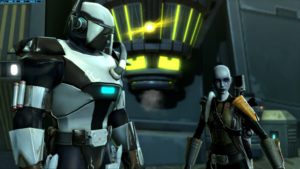 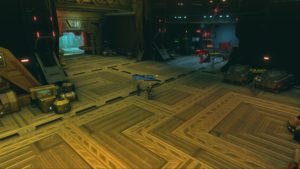 The objectives are simple: place grenades on several power points. Destroying these points will drop the protection of the city's automated droid command center: Overwatch. One will surely find there the plans of the arrow which we seek according to Kaliyo. Unfortunately, our intervention on the first point has triggered an alarm system and skytroopers intervene. So we're off to eliminate them and destroy the security platforms. Among these defensive troops are sometimes Knights of Zakuul, relatively tough elites if you are not careful. Their lightning explosion is particularly powerful but can be reflected or interrupted. Do not hesitate to activate your defensive abilities and other control effects to take the time to complete them. 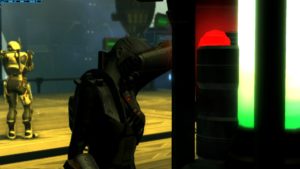 On the second energy drive, Kalyio isolates himself for a moment with a touch, the daughter of the Overwatch manager. There seemed to be more volunteers playing rebel but, as soon as our escape was revealed, the concrete caught up with them and only the latter remains motivated. She brings some information to Kaliyo and we go back to the last objective. This is protected by two guards: Zaamsk et Faedral. 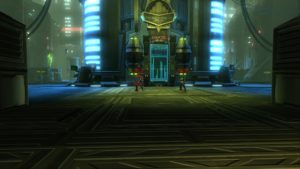 These enemies are difficult to face. Already taken independently, they are powerful but together the amount of damage taken in a short period of time is completely maddening. Zaamsk launches an orbital strike. Moving will be enough to get out of it and Faedral throws several damage zones under our feet. Keep moving and start with Faedral, it will take quickly reflect his channeled shot. At the same time, Zaamsk will launch powerful shots that deal nearly 70 damage. So now is the right time to reflect all that is possible.

After that they will fly away to reappear after a few seconds. Take the opportunity to heal yourself and ignore the skytroopers who will join the fight, they are not dangerous because their damage is not leveled on that of the master. Fortunately, because otherwise it would be impossible to get out of it. Once back, the two bosses should not have much health anymore, finish them quickly so as not to get overwhelmed by a second wave of damage and end up with the skytroopers.

The last charge set up, Kaliyo tells us that she wishes to take revenge on Zakuul whose appearance has caused an interesting "case" to flow for her. She therefore resumed her anarchist activities and is sorry for the disorder in the life of the Zakelians. They have no real control and everything is ruled by the droids supporting them. Its objective is therefore to deprive them of it, at least for a time. The damage caused having attracted other skytroopers, we fled quickly and we went to Kaliyo's apartments. 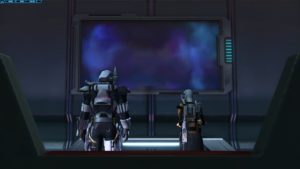 We evoke the past of the city and the consequences of our actions then, after having waited the necessary time to refine the plan, the junctions jump and we take the road of Overwatch. This center is guarded by many sentries, but only the Knights of Zakuul can be dangerous. After having struggled for a long time to get there, we reach the long-awaited goal. 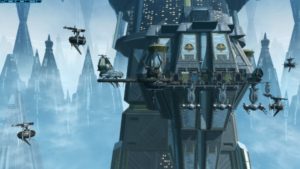 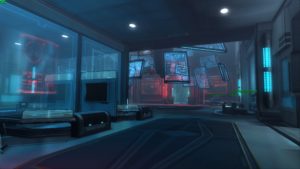 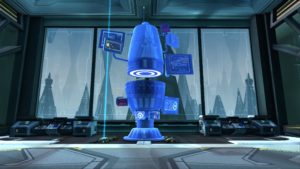 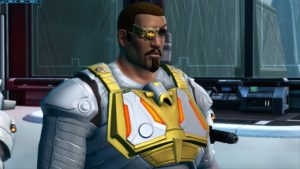 While the file transfer is taking place, we are interrupted by Tayvor Slen, Overwatch chief who appears to have had an affair with Kaliyo. However, she appears not to be satisfied with this situation where she was acting protected by the latter. Hence his desire to attack the center.

Tayvor is an opponent who begins by attacking with concentrated gravity zones. These kill instantly if you stay indoors (yes I tested). It will then launch two corrosive grenades whose damage is high but can be cashed or dispelled if your class allows it. In addition, he will spawn behind him a ship that will shoot into the room and (weak) skytroopers. To manage the latter, a shooting console can be activated near the window. Finally, it will sometimes channel a shooting car which inflicts very heavy damage, if you have enough to reflect it or to take it through damage immunity, this is when you should use it. This will also have the advantage of shortening the fight if it is a reflection. Finally, don't forget your inheritance abilities to increase your defense by 50% with the unit or your damage entering combat with the inheritance moment, they will not be too much. 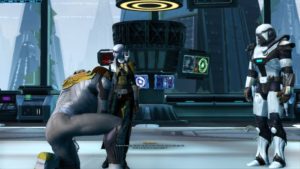 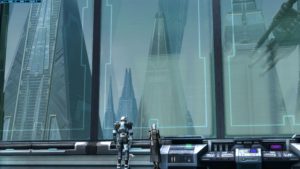 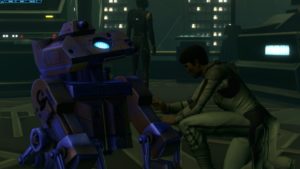 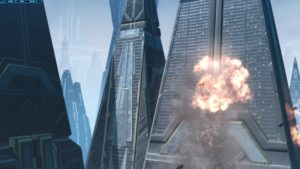 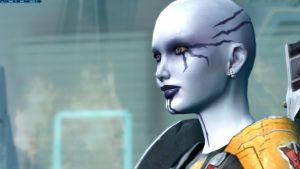 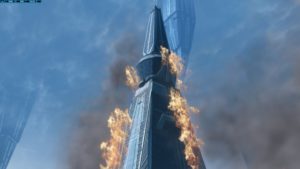 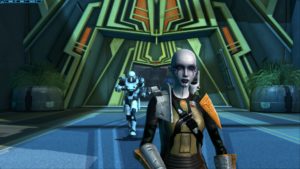 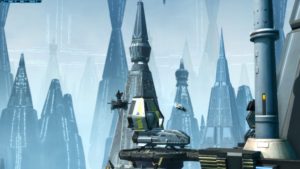 Once this last confrontation is over, Kaliyo reveals to us that he has placed numerous charges in various places of the city to cause chaos. We let her do it to take advantage of the situation afterwards, Zakel's defenses having been damaged and the repairs being very long. A few guards and knights will then remain to be eliminated before fleeing and finding us on Odessen. 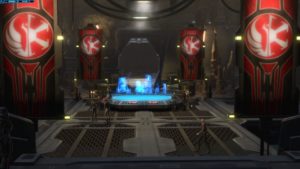 Unfortunately, the festivities are not over. Koth strongly disapproves of our decisions and leaves the ship attempting to steal the cenotaph. At the same time we learn that Vaylin razed five big cities under the pretext that they were supporting us. It is impossible to prove it and we want to fight Arcann's propaganda, but Theron prevents us from doing so, arguing that it would only lead to more retaliation. Senya then intervened to ask us not to act immediately, our resources being too limited. The decisions then remain in abeyance until further notice and Arcann ends by informing his sister of our passage. 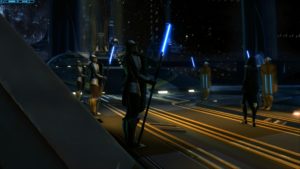 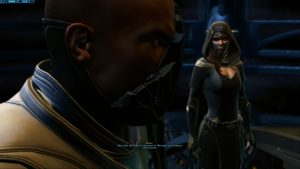 add a comment of SWTOR - KOTFE in master mode # 10