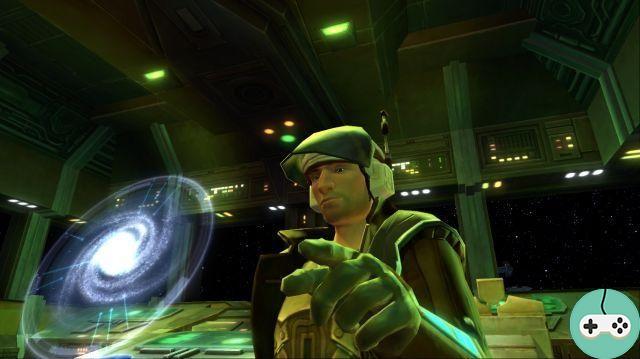 I introduce myself: Erran, from the Midichlorians guild. I come here to offer you my vision of the Maverick for PvE, at the time of 2.4.3. 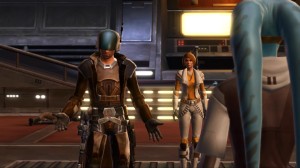 The guide obviously needs to be improved and / or corrected. It will include skill tree, interface, cycles, energy management, spells used, characteristics, relic choice.

I will summarize and be as concrete as possible for this specialization. 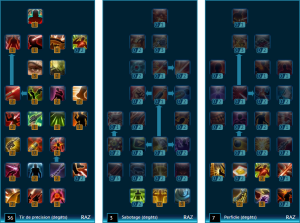 Some additional points to remember for this skill tree:

The shock absorber works that while being in cover, moreover one can make repop of the loads (3 maximum) by getting up and returning to cover every 6 seconds (the time for the spell to be valid again). Useful to better absorb damage and relieve healers.

Cover screen : Once you leave cover you have a cover screen that increases ranged defense by 20% for 6 seconds.

When you feel in danger and an enemy is attacking you from a distance and you have no more ballistic charge, move to take advantage of this screen.

Prostration : Reduces 60% AoE damage taken while the "Hold on" ability is active.

In short, to relieve the healers, here is what we can have if we make the best use of our blankets, our movements and the "Hold on" power. I did not count the defensive spells because they should be used with caution.

Note: About the Dry shot, I could have put 1 point out of 2, just to have 50% triggering on my burst directly after a squat and put the other point on Diversion, which gives a grenade, which reduces accuracy by 45% over 9 seconds. But this skill doesn't work on bosses, so only useful for adds.

In order to compensate for the 2 points of the sabotage tree increasing our energy by 10 points, these 2% alacrity allow us to better regenerate and increase dps.

Fatal injury : 25% chance for Decisive Shot to activate twice when it does damage.

When laying Decisive Shot, we have a 25% chance that it does twice as much damage (over 15 seconds) on double tapping. 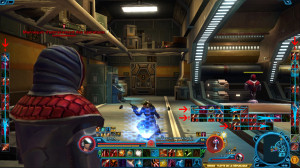 Classic you might say, however the spells on the right obscure my visual on combat. Why put fleet tps, toys and other Rancors when all you have to do is press a button to unlock your inventory or powers.

In order to go faster in my dps, I use the 2 additional bars where I incorporated my dps cycle on a dummy and also on bar 4 and 5. This way, you are sure not to go wrong in your cycle, and be more focused on the fight. As for the spell at the bottom of the interface, these are the various skills of the smuggler: defensive spells, desaggro, Cool Head, Take cover, etc. You have the 5 numbered bars this is my starting cycle, which lasts a little over a minute.

For the Cargo, it is not easy to place it at the start of the cycle on certain bosses, due to the fact of placing it on adds, or waiting a moment for burst.

I can give all the rest of my spells that I balance but it would take too long, there is already a good part on the image of the interface, at least if I have adjustments to make the image will be updated. day.

In short, here is an order of priority that I take into account:

Keep a minimum energy bar of 60% to avoid using a cool head.

The freighter hurts the energy, so throw it for a Burst flight, so you will have almost no energy problem. Keep your Cold head for moments of burst. 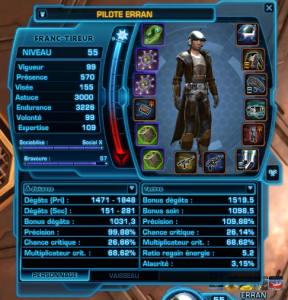 Note: Hint or Power upgrades. For my part, I only put Power buffs, so I have a better damage bonus and less crit.

That of automatic PvP which gives 625 points of power over 6 seconds, every 30 seconds.

Associated with the activatable PvE that gives power or the automatic power one. Be careful not to have the Unannounced PvP and PvE Assault Relic, they no longer work together.

I'm not trying to do crazy dps down to the millimeter, I prefer to have a minimum of "decent" dps on any type of boss.

Speaking of dps, I'm on average at 2600 without straining too much and without doping over 5-6 minutes of modeling. With a 72 not optimized stuff, some modifications 78 and all the datacrons. On the bosses, I am often first in dps during an 8 or 16 raid in my guild. Besides the cycle, I think my interface helps a lot.

For those who are new to the Maverick in operations, the cycle on my interface will save you time to assimilate it.

ASTA - Changes for the open beta