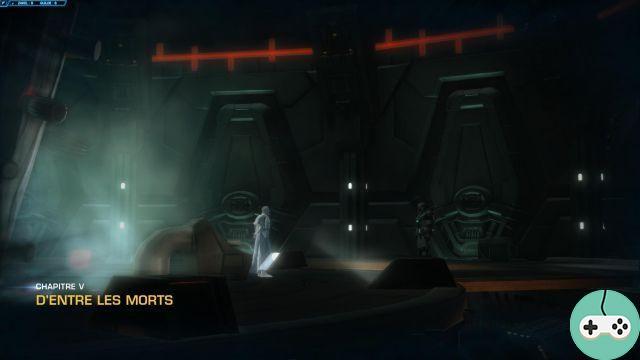 The finally repaired Cenotaph gave us access to a dark sanctuary where the ghost of Valkorion comes to us and claims to want to answer our questions. Surprise is not in order, the spirit of the emperor now seems indeed linked to us, even if the presence of the Cenotaph and the reason for his discovery seem to escape him and not to be part of his plans. He then evokes the Empire of Arcann and the madness of Vaylin, then proposes an alliance to us to fight them.

Obviously, we cannot trust him. He then claims he can prove his sincerity, but we are interrupted by the arrival of skytroopers who have discovered the location of the Cenotaph. It's time to fight to reach the main deck. Being alone, the first crossed skytroopers are not very bad. 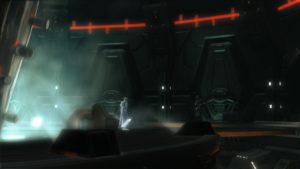 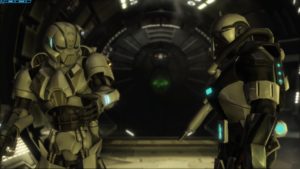 So we join Lana and Hk-55 in the middle of a fight and help them eliminate this first wave of adversaries. The Cenotaph is not ready, it will be necessary to gain a little more time for Koth to take care of the final preparations.

Lana will accompany us, while HK-55 will remain to help and protect Koth. The few skytroopers in the corridors will again be of comparable difficulty to that of the previous chapters. They have low health and are susceptible to any knockdowns. Don't hesitate to put them down and dispel the corrosive grenades. Once out of the Cenotaph, two groups are waiting for us. Two skytroopers and one emptropic battle droid strong level. 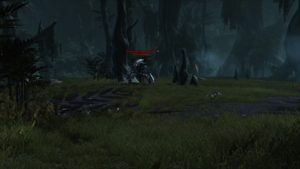 These two groups are not related, the skytroopers must be killed first because they enter combat automatically. The droid is meaner. Its damage is high and may require a healing partner if you are not yourself. Take turns using your defensive skills. He doesn't have a lot of hit points, so no need to drag out the fight, just kill him quickly. It has an ability that will send out a wave of missiles that cannot be interrupted, it is also its biggest source of damage.

After taking out the Entropic Battle Droid, you'll face a second wave of Skytrooper Droids accompanied by a tougher elite, the control skytrooper droid. This opponent has high base damage and often summons other units. Control normal units using your area spells or other incapacitators. When he summons his units, he will become immune to damage for the time of his cast. It is impossible to interrupt, the only way out is to wait for the end of the cast and quickly eliminate the summoned units in the time available. On each return, it will again inflict a significant amount of damage. His attacks can be mirrored. 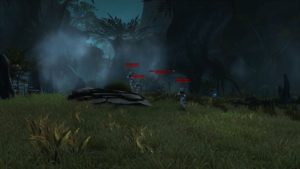 Unfortunately, the trouble has only just begun. If the droids seemed easy to defeat, it may be otherwise with the Zakelan Knights who arrive next. Fortunately, a new ally joins you: Senya Tirall. I consider its presence compulsory, because it brings a second source of saving healing in the face of this accumulation of opponents who will fall on you without the possibility of leaving combat. You won't die, you won't have the option to re-summon her and will have to start the chapter over to have her by your side again.

The commander Draynon Atrus and his acolytes will be your next and last adversaries. You will have two possibilities, the first being to move away as quickly as possible to only engage the acolytes who will jump on you at the start of the fight. The second is to take care of everyone in one block. Depending on your speed, you can opt for one or the other, but be aware that the time interval required not to engage the commander at the end of the cutscene is very short. 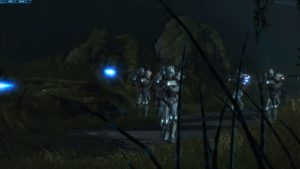 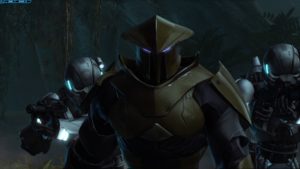 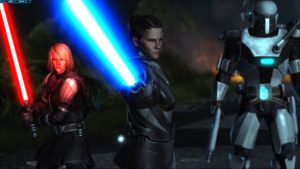 The commander hits hard, but Senya quickly takes attention. His defensive skills are above the rest in this fight. Use your aggression reduction and just hit hard. Once the commander goes down to 30% he phases and moves away, leaving you to face a walker dropped by a ship. This walker, like the commander, hurts but Senya will recover it quickly. On these two opponents, you'll probably need to use a defensive spell at first to survive attacks that can kill you with one hit. Senya playing the role of a tank and a healer will supplant you in this fight.

Once the walker is destroyed, the commander returns accompanied by a wave of ten skytroopers and knights. However, again, it will be enough to just kill the commander as his acolytes will leave as soon as he dies, which will only take a short time since he is back below 10%. 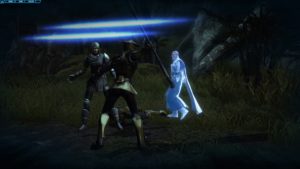 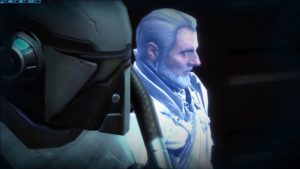 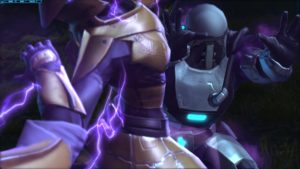 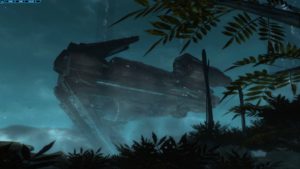 After you manage to survive all this time, other skytroopers will be added and a knight will order an offensive position isolating you from your partners. They'll be in dire straits, but Valkorion will return and offer to help. We chose to accept him and let him use us as a catalyst for his powers to save Senya and Lana. Having free rein for a few moments, they take the opportunity to get the Cenotaph out of its matrix and it will fly away to make us leave the planet.


Do you want to be up to date and know all the tricks for your video games? In gamesmanagers.com we enjoy playing as much as you do and for that reason we offer you the best tricks, secrets or tips for you to play non-stop. We offer you quality content and always updated to keep you up to date. That's why, in our website, you will find not only videogame guides but also tricks, secrets and thousands of tips so you can play to the limit. Are you ready to get it? Enter now and enjoy your videogame!
GW2 - Preview of "No Quarter" ❯

WoW - Blizzard returns to the price of sesame

Add a comment from SWTOR - KOTFE in master mode # 5