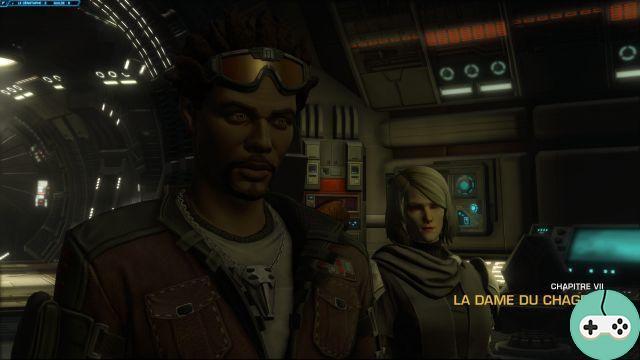 We begin this chapter at the cockpit of the cenotaph. Koth calls out to Senya. He doesn't believe she can really face her children. Senya contradicts him: for her, it is her duty to prevent them from harming. During the discussions, HK intervenes and signals us a contact. The Lady of Sorrow seems to seek us out and offers her skills in dialogue with the circuits of the cenotaph. However, she is in the slums of Zakuul, so Senya will accompany us. 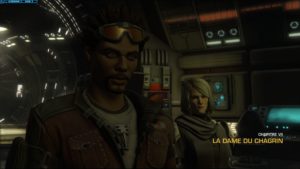 Unfortunately for us, a problem arises, the cenotaph refuses to obey the commands. You have to go to the energy generator to see what is wrong. Creatures have taken up residence in the generator room and damaged it. Eliminate these weak creatures and repair the first fuse before you can leave for Zakuul! Arrived there, we talk a little with Senya. 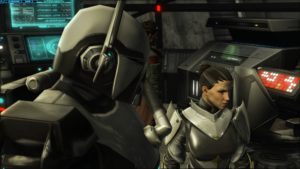 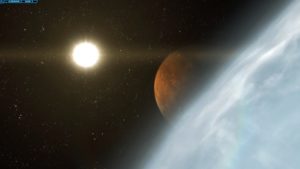 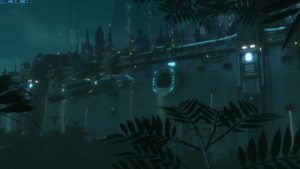 We learn more about Valkorion and the history of his children. Texann and Arcann were twins and were abandoned by their father who had little interest in their future. The same was true of Vaylin, a young child whose spirit he imprisoned to control his powers. And when Senya left, her children remained and Valkorion did not try to find her. 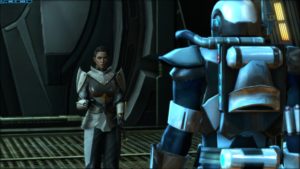 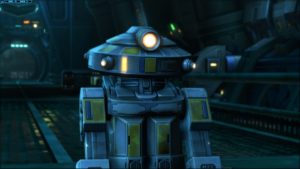 Our discussion ends when T7-01 arrives, this little droid who seems to follow us everywhere. The Lady of Sorrow has not been located, but the mercenary is a specialist and does not hesitate to brag about it. By the way, we take the opportunity to destroy the security cameras and erase the data concerning us. So our tunnel cleaning will be more discreet. The creatures that live there are not evil, but we will have to eliminate those that are in our path. We then change zone and go out of phase. The following clashes will be planet level and no longer master level until the next passage in the instanced zone. 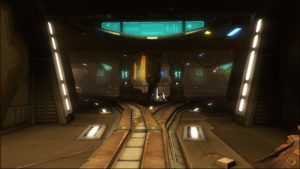 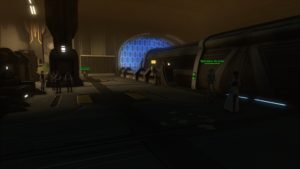 We come out of the Zakuul metro tunnels and reach the surface. Senya must then leave us to become the ruthless executor of the Knights again in order to meet one of her contacts. We drive T7 to various surveillance networks in order to cut off access and ensure a certain level of peace. Valkorion then intervenes. He specifies that he had never been to the old world before and that he is surprised at the choice Senya made. He didn't expect her to reveal her family ties to Arcann and Vaylin.

Our passage in the old world does not seem to have gone unnoticed, despite our attempts to sabotage so as not to be discovered by the surveillance computer network. Senya calls for help and we join her in the cantina. She came into conflict with the Zildrog messengers, fanatics worshiping the return of the serpent god. Not having tried to provoke these people, Senya then heads for a man named Reg and must show some violence before he wants to cooperate. Mona Gall is our next contact in our hunt for the Lady of Sorrows. So we go there.

Mona Gall is a bookmaker. She also scams her clients with staged fights and although Senya may be frustrated by this we are not here to disturb her business. However, she refuses to tell us where to find the Lady of Sorrow in particular to a knight of Zakuul and a stranger. It was then that Arcann did us a brief service with a holoprojection announcing our escape and Senya's turnaround. Mona Gall then seems much more talkative and, even if she is unable to tell us how to contact her, she evokes the link between the Lady and the messengers of Zildrog before telling us the location of their landmark. So here we are again for a new excursion in a den of bandits in Declinville. 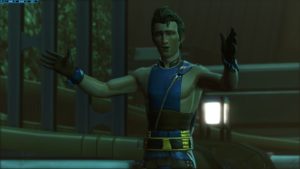 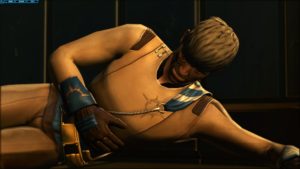 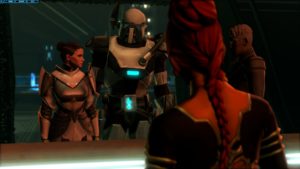 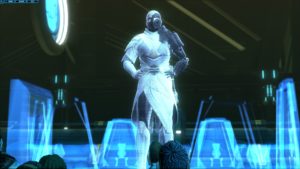 However, Mona is not doing as well as she thinks because she is stopped by two masked individuals who remind her of their right to her information and evoke the superiority of their employer over the Lady of Sorrow. Fortunately T7 is keeping an eye on the grain and will soon notify us. 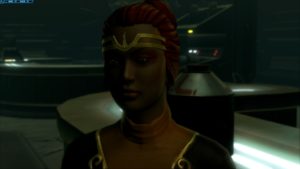 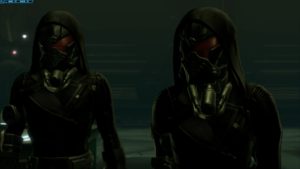 When we arrive, the Zildrog messenger base is heavily armed. Koth, who has been warned by T7, then shows up and tries to oust Senya. Supposedly he would be more qualified than Senya, because our opponents would hate the Knights of Zakuul. A good fight is not to be excluded, we choose to keep Senya with us. And, as the elimination of this sect is not to the advantage of the Lady of Sorrows, it will eventually attract her. We finally enter the instantiated zone again. Watch out for damage from all opponents.

The first enemies are normal, only one will be more imposing although we are starting to get used to strong level opponents. Their level of danger is low, but one should not be surprised by its strangulation of force. Focus on the two little ones first to reduce damage if necessary, then take out the stronger one!

We finally come to the Exalted, leader of this sect. He accuses us of threatening the balance and order maintained in the old world. Senya no longer holds his place and in return accuses him of promoting domination by arms and denounces the threats and extortions suffered by the weakest. The Exalted then reveals that he has an agreement with the Emperor including the absence of knights. Senya retorts that this is not their objective and demands a meeting with the Lady of Sorrows. The Exalted then launches into a long and boring monologue announcing the return of the serpent god and gives the order to eliminate us. 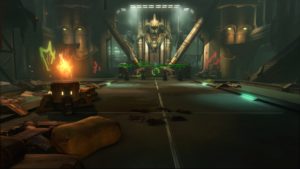 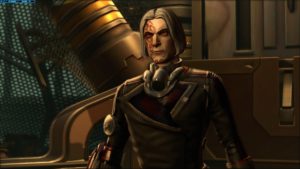 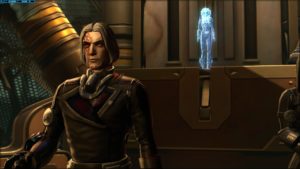 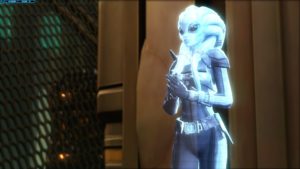 The Lady intervenes at this moment claiming his attention: her son has been kidnapped, but this remains ineffective and the Exalted continues his attack, so he runs away and leaves his henchmen to confront us.

I had to face the first of them twice because it launches right out of the cutscene on Senya and inflicts very heavy damage to her that she cannot contain. You can control it initially by a disability such as lightning strike (sorcerer) or electro-dart (mercenary). Take care of his acolytes, three in number by knocking them down with an area capacity, then finish them, one by one, before returning to the named one. Zoran Velfahsa.

The trick is to control the damage done by the burn that he puts on you. When it hits a target affected by this burn, it inflicts nearly 100 points of damage per hit. Suffice to say that we should not stay close to him at this moment. Moving away quickly is a solution, as is kyte while staying in motion. You can also dispel the burn, use a glint at this point, or invincibility. Also, feel free to use Uniqueness which reduces damage taken by 000% to you and your partner from your inheritance. As a mercenary the electro-net is also a solution to slow him down and prevent him from jumping on you at the start of the fight, delaying the laying of his first burn. Using this last principle and a short incapacity (50 seconds), he was only able to make one jump before dying. 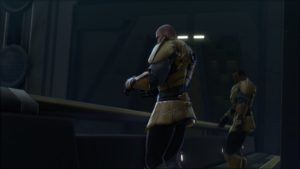 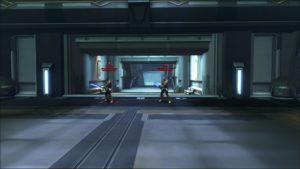 A few messengers will try to oppose us afterwards, but nothing that differs from the beginning of the chapter. We therefore go to the razor as the Lady of Sorrow had demanded, but given that we arrive in a less discreet space, the Knights of Zakuul blocked our way. 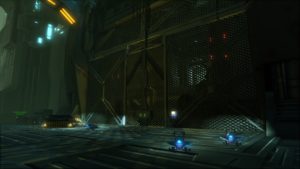 Novo, one of our adversaries during our flight, comes to take revenge for the death of his partner. He and his new comrade, Basilk, are immune to knockdowns and control effects. It will therefore be necessary to face them together.

Novo just jumps on you and deals heavy damage. I chose to eliminate him first. Basilk, meanwhile, does less damage, but has a channeled ability that is best avoided. The flow of force he throws can be interrupted and takes the form of a cone in front of him. As it does not move during its incantation, the size of the cone therefore makes it possible to exit it quickly. 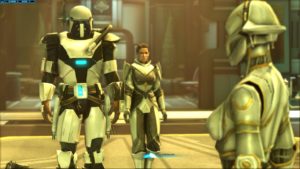 This last difficulty smoothed out, we finally meet the Lady of Sorrow, or rather Scorpion, former ally of the imperial agent. She eliminates the Exalted and asks us for our opinion on the fate of her offspring. Since he might want revenge and take our life, we choose death, but Scorpio leaves him free to take over the messengers if he respects their agreement. Scorpion then lingers to give his final instructions and then joins our team, although Senya and Koth fear his dangerousness. She seems to know a lot about the cenotaph already and her eagerness to work on it is not faked.

The Flame In The Flood - Death, Exploration and Death! ❯

Add a comment from SWTOR - KOTFE in master mode # 7