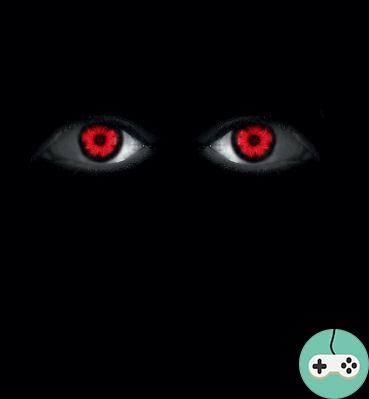 Warning, this Datacron is prohibited. It must never be used or observed and must be destroyed by order of the Jedi Council.

We are entering a new era, that of reconquest, through terror and total mastery of the dark side of the Force. We are feared and we inspire fear. Our power is unlimited and thanks to our innate intelligence, a knowledge that we bury in the twists and turns of consciousness, we can model and shape life in our image. The sprawling specters of the greatest Sith leaders in the history of our religion remain with us.

Our Strength dominates and treacherously subdues weak but helpful spirits, such as the Sith warriors.

I regard the Sith Warrior as armor, docile and malleable armor according to my will.

Our Force is a fire, it must illuminate the galaxy.

Our Force is a fire, it ravages everything in its path until it destroys all life to increase our power. 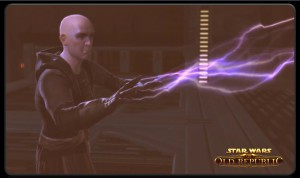 As for you who are observing me now, don't you feel a draft caressing the spine of your back? Little by little by violating my secrets, I creep into your mind and in the end you will no longer be you, I will be you!

We will now analyze some powerful techniques, which Jedi Debris wants to ban: 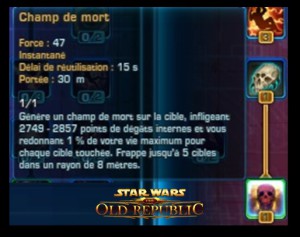 The Deathfield is my favorite technique: it absorbs the Force, life and nourishes me to fuel my immortality. I can bring down any living being with this unnatural technique. She is just a sample of the ritual I used to annihilate a world. This world that I forbid you to visit, because the madness and despair that reign there could delight me in this terror that I convey ... 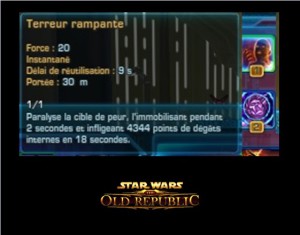 This terror will then only be the additional effect created by the death field. Because when I drain this life, the bodies of all living creatures caught in its wake panic. Because they know that their end is inexorably approaching. They find themselves paralyzed and crawl at my feet, begging for mercy.

But pity is the domain of the weak. Having pity is the risk of seeing the end of one's own existence. So we will finish off the creature with an electric arc so powerful that it cannot get up. 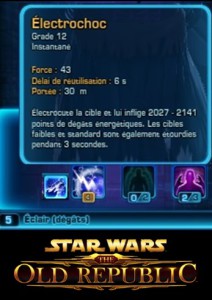 We give her a faint hope by reviving her with a simple electroshock, only to finish her off using continuous Force flash. 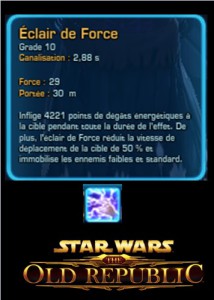 Faced with this tiny demonstration, we contemplate this piece of inert flesh. The accumulation of these powers is essential to obtain total victory and to break its chains.

For over a millennium, I was able to contemplate and establish my dominance, until one day a knight named Revan appeared. From the depths of my consciousness, I longed to possess this body in order to reap its full power. While waiting for the confrontation, I continued to retire to a meditation room.

And it is this intensive meditation that allows me to increase my link with the Force. During these phases of meditation, no one should disturb me in this desire for submission of spirits. The tighter this bond, the more powerful mental attacks we can project and surrender even the most powerful Sith Lords. Until the mental transfer where we take possession of the body. 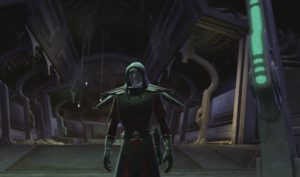 Little by little, we devour the spirit and the words which begin to resonate in your head are in reality mine thanks to this object which you devour, I can be reborn. You are then enveloped in a frenzy totally out of control because you seek to know the continuation, always the continuation. 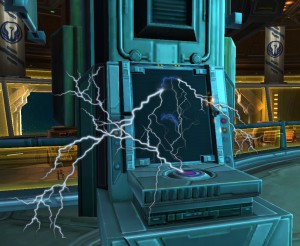 Strange phenomena are starting to happen. Computers that bypass each other, eyes that observe you through a simple mirror that you contemplate. 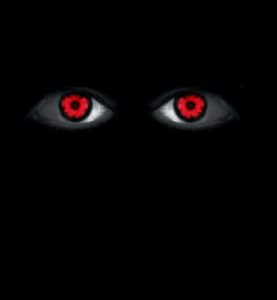 What if the reflection of this mirror was actually the figment of your imagination? Or that the person in front of that mirror was really you, or at least the vestige of what you were in your past?

Because this person who smiles may not be what they used to be. When that icy air envelops you and carries you where no one has been, that smile on the corner of your lips is actually mine. I probe you and I absorb all your possibilities of escape. Because you want to know the continuation, but this continuation you know it because I have just blinked my eyes!