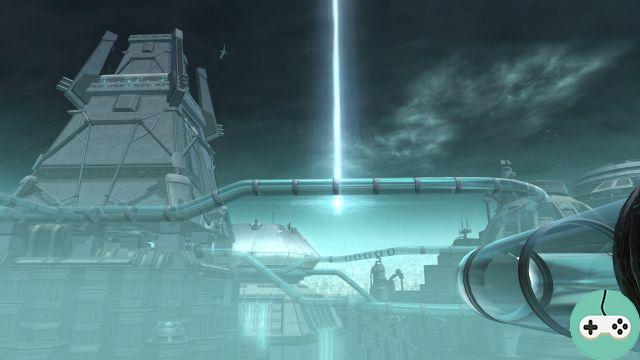 Tyth is severely more dangerous on hard difficulty than on normal difficulty. He is demanding in dps and placement and you will have to respect carefully the chosen focuses in your group and stop the damage if necessary. 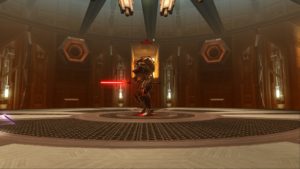 The confrontation with Tyth always takes place on a circular platform. Tyth has, in addition to a primary attack dealing minimal damage, two attacks with markers on the ground and a dowry that lands on the tank and can be dispelled by healers. In addition to these three attacks, he will regularly summon waves of droids to aid him and enrage if you kill too many in too short a period of time.

In addition to these mechanics present in normal mode, it will have an additional spell projecting players according to their placement. 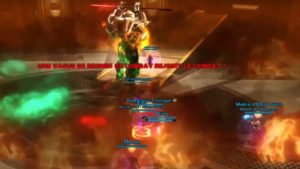 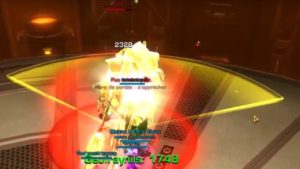 Guardians are the fastest drones. They will generally head to healers when they spawn and have ranged shots. They will inflict damage on them that can endanger them. These are the number 1 priority drones to kill. They will appear on the areas indicated by a yellow marker. 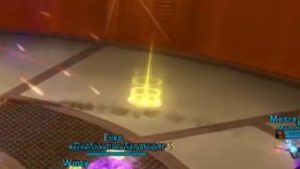 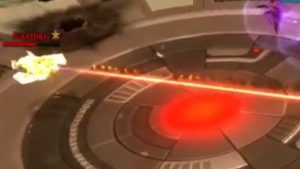 Justices are drones that can be timed out. They have a shield that reflects all damage taken. To interrupt this shield, you must apply a short-term check on justice. They will appear on the blue dots. They are quite slow but deal damage constantly to anyone who will drag their paws into their shield without interrupting them. 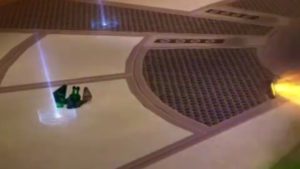 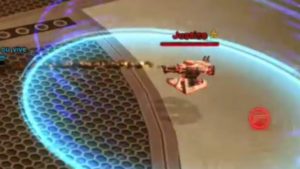 Graces are the healing drones. They can either be focused to be killed quickly or timed out. In the case of a temporization, it will interrupt the healing spells which are the first three and leave the fourth called grace of Aivela. The latter debuffs Tyth and reduces his rage units by three. Between one and two of these will appear on Summon turns 2, 4, and 6. 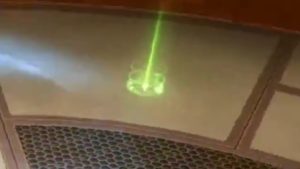 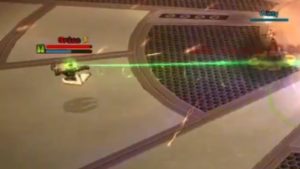 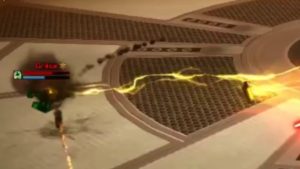 spell not to be interrupted

The last drones are the spears. They move quite slowly as they spout a rectangle-shaped attack indicated by a red ground marker, and they don't move during it. 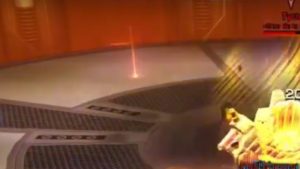 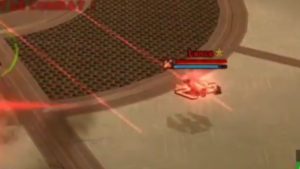 Let's start by describing the boss's rage mechanics that will set the pace of the fight. Whenever one of the summoned drones dies, Tyth will gain a unit of rage. If this drone is killed by Tyth himself, then he will gain three units per killed drone. At 10 units stacked, Tyth will trigger the Rage Overload inflicting 75% damage to all party members based on each party's maximum health. This damage cannot be reduced or ignored, even with Force Barrier type invincibility defensive spells. He will lose his units at the rate of one every 6 seconds due to the rage debuff. Another way to make her lose these units is to let the graces channel Aivela's grace. Finally, the more the boss has units of rage, the greater its damage zones will be. It works in three stages:

Your objective will therefore be to never reach 10 units of rage. For this, the dps will have to kill the drones as quickly as possible. An effective way to do this is to focus the Spears which will not move much and cluster on them or in the center of the room so that the guards come in melee to kill them in an area. The justices will be the exception because, from the second or third pop, the tanks must recover them and move them away from the boss so that they do not interfere with the fight. At the same time, they will have to announce the rage units and instruct the dps to return to the boss if necessary.

On top of that, tanks will have to swap their aggro on Tyth with each flip. The inversions are twisted because they reset the aggressiveness of the tank that has the boss before the inversion to zero. It is therefore necessary that the tank which must take again taunt the boss during the inversion to recover its level of aggressiveness. In parallel, and to help the tank, the dps will have to use their aggressiveness reductions so that the boss does not turn around unexpectedly. In addition, it will be necessary to respect a strict placement if you do not want to be ejected outside the platform where the fight takes place. The group must be placed in the blue zone in front of the boss and the tank which must take up aggro outside the zone behind the boss. Thus the group will be thrown opposite the boss without falling and the tank will pass in front of the boss.

Finally, concerning the healers, you will have to be ready for each appearance of drones and keep yourself alive while the dps take over the drones that will be on you most often after their appearance. To do this, help them by placing yourself on the spears to maximize the damage of zones or by grouping you in the center with the whole group if there is none. Obviously, if the inversion is at this time, the placement concerning it takes priority. In addition, as in normal mode, it will dispel the boss's tank which will regularly take a debuff increasing the damage it suffers. I recommend removing it around 5 units. There are no specific rules other than removing it before you are able to keep it alive. 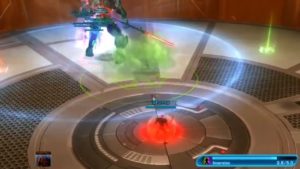 If all of this is done correctly, you will surely reach 60% of the boss's health. At this point, the combat will change slightly since there will then be 5 drones per wave that will appear. The rest will not change. From 30%, the combat will change significantly because the boss will start to garner 2 units every 20 seconds. This means that it will be necessary to ignore the majority of the drones which will have to be moved away from the boss by the tank which does not take care of the boss at this precise moment. Grace must be killed as quickly as possible so that Tyth does not regenerate and the role of dps will be to focus as much as possible on the boss to drop these 30% as quickly as possible.

Do not hesitate to delay the boss if necessary and to stop the waves of drones for a while so that the accumulation of rage decreases and does not cause an overload of rage.

Control spells of all classes can help prevent drones from going under the boss when reversing like specialist charring. It is also possible to achieve the same effect with cryogenic grenades buildable in cybernetics. Even blue quality grenades can serve and save you by using them at the right time. But beware of specializations with damage over time (dot) or in general for dps, damage after placing a grenade will remove the immobilizing effect and the drones will follow you.

With the redesign of 5.2, boss Tyth will give a relic token 248 which can be exchanged on the Imperial or Republican Fleet, depending on your faction, for a relic that suits you. It also gives two duplicate mods which are unique items (limited to one per character) and will likely be used to duplicate Tyth. We will come back to this object and its use as soon as possible when we know a little more. In the meantime, if you had the idea to find out for yourself what it is for, know that it is possible to use it at the end of the operation by going to the throne overlooking the entrance.

Good luck to those who will try to set the record straight for Tyth, who believes himself to be invincible.