SWTOR - Presentation of the investigation 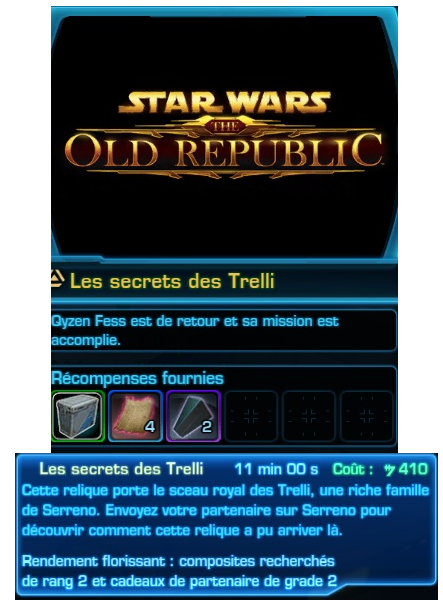 Investigation (or Investigation) is one of the four mission skills currently available on Sw: ToR. This skill will provide you with all the components you need to craft state-of-the-art weapons.

This is learned from the Imperial / Republic Fleet and requires only one pass, once the skill is learned you will never have to go back to your skill master to learn something new, the "missions". »Will be unlocked by themselves by following this diagram:

It will happen a few times that one brings back to you a manufacturing plan instead of the hoped-for composites.

Note that the mission levels are not the level required to perform them, it is just an indicator that will relate to the components obtained.

As with other crew skills there is a color code telling you how many skill points you will earn on a mission. This color code will appear in the name of the mission.

Unlike the crafting skills, you can only launch one mission per partner at a time, these take a certain time and are subject to a chance of failure, to increase the speed and the chance of success you will have to climb the affection from your partner.

Note also that each partner has predispositions for certain crew skills. These predispositions are called Efficiency Bonuses and Critical Bonuses. But what do these bonuses do for you?

Take this companion as an example, he has an efficiency bonus in synthesis & diplomacy of 10

For example Ashara Zavros above will go faster than your other companions during his synthweaving crafting and diplomacy missions. Each companion (except 2V-R8 and C2-N2) has unique attributes that it would be a shame to overlook.

Set up the investigation

Mission skills really don't take a lot of effort to build, the only way for these skills is to simply spend some money and send your companions to the chain. For this it is advisable to acquire the skill as early as possible in the game (level 10 preferably during your first visit to the Fleet). During the first planet, take advantage of the downtime to send your companion on missions (which are very short at the beginning, about 3 minutes). As soon as you acquire your next partners, don't hesitate to make them work non-stop, as long as you have the money and time, nothing can stop you. If you chain well you will be 400 well before level 50.

Investigation is a skill that only completes Weapon Crafting, if you haven't chosen this as a Crafting skill there's no need to drop investigation.

To launch a mission, nothing could be simpler, go to your crew skill menu (default key: N) and select the skill, a mission list will be displayed with its name (accompanied by the color code) its duration , its price as well as its yield.

There are 5 different types of returns:

Thanks to the crew skill "Piracy" it is possible to get mission discoveries, there are mission discoveries for all mission skills. Thanks to a discovery of missions you will be able to unlock a new mission. Be careful, however, this mission is for single use, but this single use will bring you many more components than the other missions to overcome them. There are 12 mission findings for Investigation: 5 blue and 7 artifacts. (Source)

Note also that they cost more than the others and take a longer time to complete, but in the end it's really worth it. You don't have to take the Piracy crew skill to get these mission discoveries, you can buy them at the Galactic Market, it just has to pay the price.

Example of a mission result obtained through mission discovery: 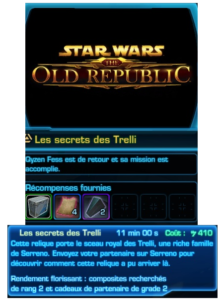 Continue or not to make missions to obtain your components, you can also start the trade of these which are not badly requested. You can also get into the business of partner gifts or just use your skill to farm gifts for your other characters.

This skill will also allow you to occasionally get your hands on bosses for all crafting skills, some of which will sell for quite a bit.

Another interesting crew skill that will help you a lot if you are a Gunmaker! Do not hesitate to leave your impressions

Add a comment from SWTOR - Presentation of the investigation