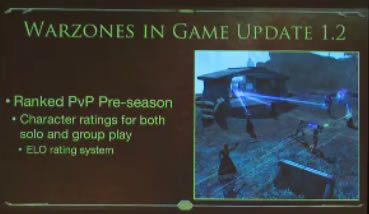 A new session hosted by Gabe Amatangelo has just ended in Austin about PvP. PvP is very popular, indeed statistics show that over 50% of players play in war zones every day!

1.2 will bring a new war zone, the Novara Coast, based on the point capture principle, which will take place Empire vs Republic but also Republic vs Republic or Empire vs Empire.

There are many new options for PvP with the start of the PvP Ranking preseason and the rated queue system (single player & squad). 18 new medals will be implemented, especially around objectives. There will also be new daily quests. 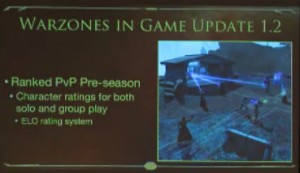 It is very important at the moment to fight against AFK players. With 1.2, we will have the ability to vote to exclude players and it will be necessary to have contributed a minimum to be awarded medals. 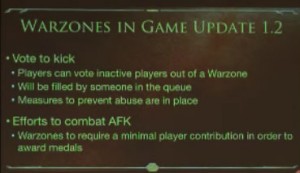 Additionally, there will be a new level of PvP gear, War Heroes (with new colors for Lightsabers) and the ability for makers to craft gear with Expertise (including crystals). War Hero gear will be directly purchasable and will not require Prestige rank. The latter is not intended to make the players more powerful, it is there above all to recognize the value of the player in combat.

In addition, all war zones, on the model of the new one, will be able to take place between players of the same faction. All the voices will be redone to take this new parameter into account. In particular, this will help reduce the number of Huttball games played on certain servers. 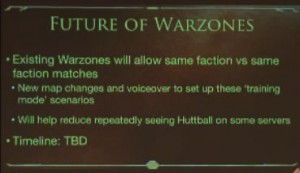 In the future, they plan to create inter-server war zones that allow registration in groups of 8 as well as for a specific war zone. In the same vein, they work to allow players grouped before a war zone to stay grouped after.

They are working on Ilum to completely redo the area because it is not working as expected. They want to make the area more fun. The quests will be removed and the current rewards will be available in the war zone. These changes will be made throughout the year, discussions will be open to have your opinions on this subject but it will be clearly based on setting objectives. 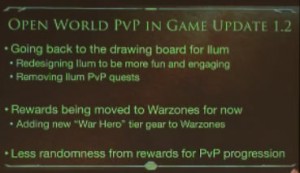 The Tatooine area will be made easier to access but will remain a "sandbox" PvP area and will therefore not change in its mode of operation.

They will continue to work on some minor class imbalances and hunt down bug exploiters. Many teams are working to detect and prevent bugs. The whole team invites you to help them if you ever notice anything.

The statistics will be reviewed on the new equipment.

They work in war zones for larger groups.

They are thinking of improving the way they target in PvP, but they are more against "self-facing" which limits tactics in PvP.

The best PvP gear will be gear from rated war zones, not crafted gear.

The rated war zones are the main focus, before the addition of daily quests.

They will be adding rewards for wild PvP.

I think I have summarized the important information. You can check out the very specific report DarthHater did here.