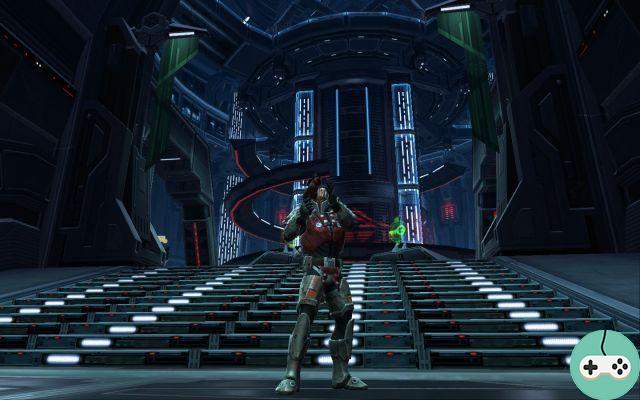 Saniol returns to talk to us about the Specialist again, this time focused on the DPS part, not in a guide strictly speaking, but rather an inventory of this class. This text is intended mainly for players wishing to make operations. If you are in the leveling phase, do not hesitate to comment for more details.

As for the PvP talent trees, they will be the subject of another guide or an update to this one. I wanted to incorporate it directly, but faced with the task which becomes more complex as I advance, I can only postpone it for more quality.

The peculiarities of the DPS Specialist

The specialist is a rather "special" class for a dps. Why ? Because she has a ranged weapon, but her effective attacks are melee. In addition it can provoke and, to add a layer, it is a DPS in heavy armor!

In the event of a hard blow, there is a "panic button": the power to Heat dissipation.

By listing its peculiarities, we tell ourselves that the DPS Specialist can off-tank. Well yes, I often do the tank: hop hop hop, we quickly release an endurance / defense stimulus, we throw our shield, we provoke, we release an absorption dopant and voila. It happened thanks to this to tank a few seconds Golden Fury, Dash'roode etc, or to run Sunder or the bosses at the end of the palace. Empty a tank shield to put your damage modifications into it, so you can switch to ion cylinder during this phase.

Basically no matter what talent tree you choose, the equipment stays the same! 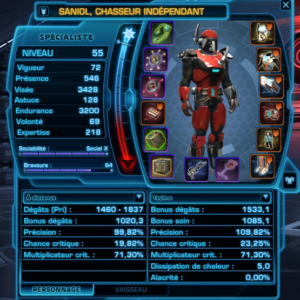 You can also go on a relic of Incommensurable Ages which is to click. As much on a healer yes, but on a DPS, I'm less of a fan. There is finally if not the Critical relic in possibility, while waiting for the increase of the Concentrated Punishment.

Tips for a comfortable start to level 55: 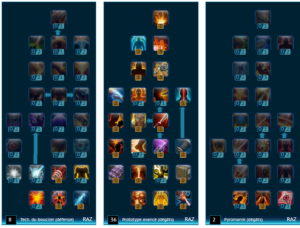 Long shunned, this specialty has come to the fore in 2.0. Much less fun to play than the old pyromania, but the damage is there! Even if there are still a lot of arsonists, this specialty is more and more unanimous. The cycle is easy to learn:

And we start again ... Everything is said. Interleave the shoulder cannon missiles when you have a hole, on this specialty you will have seven!

This specialty has the following advantages:

And as a downside: simplicity. 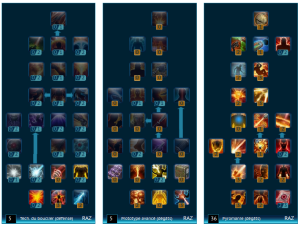 This tree has a rather PvP reputation, where it also obtained its letters of nobility before 2.0. However, it has since lost its luster. Its big advantage is to be more effective when the enemy is below 30% of its health thanks to the talent. Hyper-burn and therefore, it is even more difficult to measure the effectiveness of such a specialty on a pole.

What I find very unfortunate, especially for leveling up, is that theRapid ventilation has been placed much higher than before (this reduces the cooldown of the Ventilation 30 seconds).

The fight is mainly done by feeling, we must relaunch the Fire bomb for damage over time, and activate its Aligned shot with priority the searing fist (60% chance). And if it is under recharge, use Flame Burst (45% chance), excluding the possibility of triggering (possible every 6s), use the Flame thrower, it will do more damage than the Gust, and dissipates its heat if placed within 40 points. To schematize, the order of priority:

Of course in multi target, the sweep will be very appreciated with the talent that goes well! 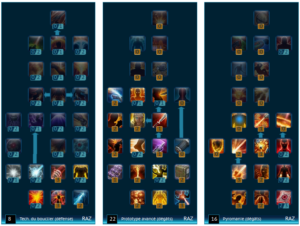 Ah! the specialty that is close to my heart, even if with the last few modifications (as a reminder, less damage on Fire bomb et Flame thrower, but modifications of the cylinders), it keeps a very good level of damage, but it will still be dependent on the set bonus "+ 8% damage on Line Shot" because it is the blow that we will use and abuse as on a pyro, but it will be amplified by talent Blood stalker.

For those worried about heat, even if we have no help with dissipation, this specialty is played very well below the 40% threshold, in particular thanks to the activations of Aligned shots and Searing fists free. In addition, if the fist activates, and it activates the Line Fire itself, hello the heat drop!

However be careful, if we get carried away it can go up very viiiiiiiite! And that's exactly why I like this specialty, it is more technical and can benefit from a very good burst. There is always something to do: refresh his damage over time, a trigger of Line Shot coming in, oh hey! a prototype flamethrower with 3 charges to release, a dazzling Fist trigger ...

Note in passing that even the sweep increases your flame thrower, in muti-target, it is royal after a death from the sky.

In opening it's simple:

And then we gauge according to what there is to do.

The Bounty Hunter, this fashion-victim

Small parade section, with some equipment that exists, or existed. For the bounty hunter, I did not put all those available, we would not be finished. See it as a message of hope for bounty hunters new to the game and disappointed with their filthy early game armor! 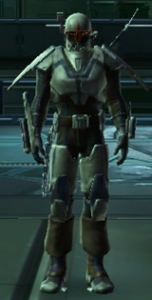 In my opinion, the specialty Prototype advanced is very efficient and simple. It can be suitable for most players, for its very readable playstyle and high damage. The Pyromania is fun and, I think, well suited for leveling up to a point, not least thanks to the Inline Shot activations which are pretty much the whole class. Thehybrid is really a lot of fun to play and will do the most damage along with the 4 piece bonus.

After that it will be up to you to choose your path, if you have not already chosen it.

WildStar - Destruction of the Mechanic ❯