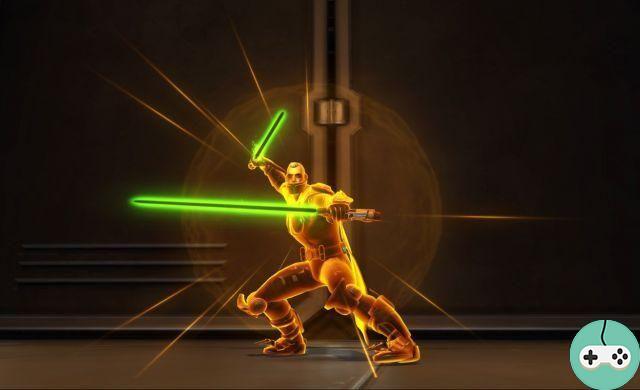 I introduce myself Sparkk, Jedi Sentinel from the "Guardians of Anachore" guild on the Mantle Of The Force server with which I cleaned up all high level PvE content. I present to you this guide which is taken from my personal experience on Star Wars The Old Republic. The main purpose of this guide is to help players in difficulty to master this specialization and may be sure to be able to draw other information from it. 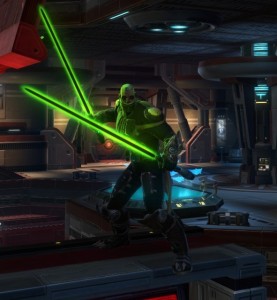 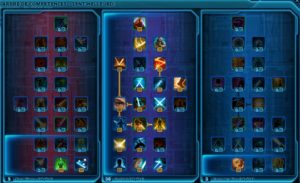 Some points of this tree may seem unnecessary to you, so I give you my choices and will argue them. My tree aims to maximize your damage in operation, survival and movement, without influencing the damage you can provide or even increase it depending on the fight.

For the remaining 3 points, it's really situational, let me explain: I prefer to leave the 3 points in Insight, which increases the chance of critical force hits. For the simple reason that I use cauterization in my pseudo cycle (I will explain why the "pseudo cycle" below) and that cauterization is an attack of force coupled with a physical attack. For the more curious, you may notice that the highest ranked Sentinels or Marauders in Ataru use cauterization in their cycle. I will explain where to use it below.

You can also place 2 points in Reinforced winds if you are given the role of typing a lot of addons on certain bosses to have an area bonus on the force sweep. 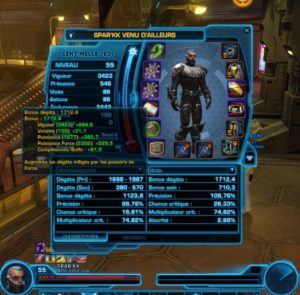 I am not yet full 78, I am missing ... a relic and 1 implant. I still have a relic in 75 and an Oriconian implant. I established my caps on this basis:

Why is alacrity useful?

Alacrity, contrary to what you may think, is very useful. You just need to understand why it is useful. The principle is not necessarily obvious but I will explain it to you in a few lines:

First of all, you need to know two things:

Thanks Bioware for this trap!

Well that's fine, but what can this 32% be used for? Quite simply, they're there so you can wedge one more spell under the Accuracy Slot ... are you following? it is the spell that punctures the armor of the target for 4.5 seconds.

Example: Lunge of Accuracy + Expert Strike (Sub Zen + Alacrity 2.3 sec instead of 3.0) + Storm of Blades + Elimination + Flurries of Blades or other.

This makes you a considerable gain on your DpS, I can assure you that after intensive days as a model, with 72 equipment at the time, nothing more not 75 or 78, just 72 from Darvannis hm and Asation I kept around 3050 on a pole. 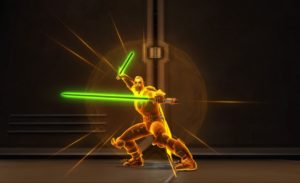 So I'm going to tell you about my "pseudo-cycle" ... Why pseudo-cycle? Because for me, in the combat specialty, there aren't really any cycles, it's more a very good trigger management. This specialization is known and appreciated by everyone (except tanks) for its big burst advantages. A good opening will allow you to stagnate your DpS relatively high if the triggers (procs) are managed properly.

In 3 seconds you are ready to send a monumental burst.

This is where it all plays out, though ... and I mean only if you have the buff of the Timely strike, namely the Storm of Blades which criticizes at 100%, throw it ... always under the buff of the Accuracy slot, your Storm can criticize between 9900 and 10500 with the 4% of Zen.

In addition, during your expert strike, your Hand of justice is activated, i.e. the activation of the Accuracy slot as well as your Finish elimination. This happens too infrequently, so it is an unrepresentative example but which may surprise you if you do not see it. We will assume that the buff has not triggered.

At this point, you need to regain concentration, so

Once your concentration reserve is almost exhausted, do not hesitate to start the Twin saber throwing to furnish and gain a gcd on cooldowns of other spells. Completely free and tap in a cone over 30m long and about 5-6m wide, he can hit well under critical, for example 6000 - 6500.

You will also need to use some strikes unfortunately, as explained above, to wait for a spell to recharge and regain some points in Concentration while waiting for the Relentless strike.

You must also learn to use the Force leap, for example during your procs which have 10m of range, namely the Storm of Blades and elimination, try to get into the habit of throwing them backwards. Why ? Well, while backing up, you cast the spells, once cast, you have for sure reached the 10m necessary to perform the force jump which will give you back 3 of concentration and will save you time on the cooldowns of other spells .

Now let's talk about cauterization, I advise you to use it, it will make you a gain of about 2%. It should only be started at a certain point in your proc cycle. For example you have started everything, but you still have concentration. Check to see if you have an even number like 6 left. So you can roll 2 Blade Flurries, which only cost 2 concentration.

However, you need 3 units to be able to cast it but thanks to the 2 talent points taken from the surveillance tree in the concentrated slot (which has a 100% chance of giving you back 1 unit of concentration when using the blaze of blades. ), it ends up costing only 2.

Thanks to the 2 talent points taken from the monitoring tree in the Concentrated lunge (which has a 100% chance of restoring 1 unit of focus when using the Flurry of Blades), it ends up costing only 2 units instead of 3. However, you need 3 units to be able to cast the Flurry of Blades.

It is only really to be used at this time. This again allows you to be able to save your time on other spells to keep basic strikes to a minimum.

It's relatively complicated to be able to predefine a cycle on the combat specialty, because everything is played out with your triggers, it's really situational. You will never be able to conduct 2 fights in the same way for the simple reason that the triggers never come at the same time.

It is up to you then to analyze what I have been able to explain, to learn to recognize them and to make the most of your DpS once the management is perfect (even if perfect is not the word to use because no one is). 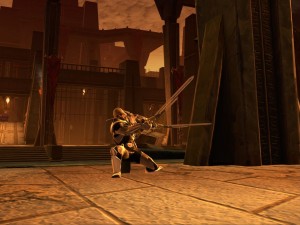 Sentinel's set bonus: you absolutely need the 4-piece set bonus which increases the damage of the expert strike by 8% as well as all damage done under the ZEN by 4%

I recommend the following relics in combat specialty:

This is likely to change with the relics change in 2.5, don't worry once you're on the server and we've done the math on the relic yield and after a lot of testing I will update the guide again.

To get an idea of ​​the fights, you can find the POV videos that I make on my YouTube channel to perhaps better immerse you in my management of spells / procs / etc. 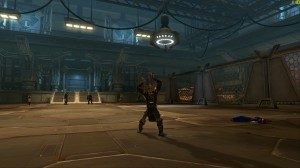 A big thank you to you for taking the time to read this guide, which I hope will help you understand and optimize this specialization. If you have any recommendations or questions, do not hesitate, I remain at your entire disposal.

Special thanks also to Guardians of Anachorus, who will have contributed to the good realization of this guide as well as to the 2 Jedi Sentinels, members of the "Prøméthée" without whom I would perhaps not be where I am now. They will recognize.