SWTOR - Voss, the world of mystics 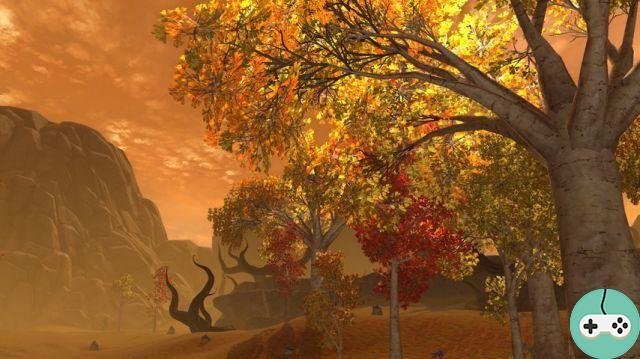 A soldier showed up at the Jedi Winto's mailbox and dropped the file he had ordered.

The planet Voss is a recent discovery in the modern galaxy, as its earliest mention dates from the years between the return of the Empire and the signing of the Treaty of Coruscant. A fleet of Imperial cruisers passed through this system, at the edge of the Hutts territories. They thought they would meet easy prey, but to the surprise of the entire known galaxy, they were beaten. Only the Chiss managed to defeat them so much, and they had the resources of several planets. The peace signed and the reconstruction of the forces launched, Republic and Empire looked into the reasons for this defeat. The result has earned the two camps the will to form an alliance and to bring this power back with them. But the strange people who live here have their habits, and in ten years no negotiations have resulted in anything. 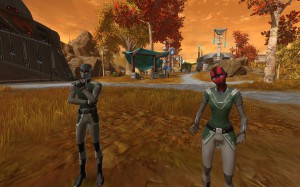 (note: this article uses some elements of the history of the planet quest, pay attention to spoilers ! )

The people dominating the planet gave it its name. They are humanoids with blue skin (for males) or red (for females), at least mainly. With orange or blue eyes without irises, they are devoid of hair. Their culture is strongly imbued with mysticism, led by the visions of prophets of the Force. From state decisions to the fate of the least citizen, from the richest and largest families to the poorest servants, anything a person can wonder about is submitted to them. And their interpreters, those who discuss and define the meaning of these visions, de facto hold the power. Moreover, the government is officially made up of three of them, incidentally also supreme judges during the largest trials. Everything that affects foreigners on the planet also depends on them. If the negotiations last so long with the Republic and the Empire, it is because the understanding of the visions concerning them is still not settled. The Three are based in Voss-Ka, the planet's capital and the only spaceport authorized for foreigners. And if smugglers try to settle elsewhere, it will be at their own risk. Because the Voss militia is used to the exercise of war.

There is a second race that developed on Voss, the Gormaks. The two peoples have been at war with each other for so long that the reasons for the conflict are no longer known to anyone. Everything opposes these two rivals: some are graceful, elegant, wait-and-see and mystical while others are rude, warlike and primitive. Through the visions of their Force prophets, the, the Voss gained the upper hand and contained their rivals in a small region of the planet. Only an ancient prophecy forbids the victors to exterminate the vanquished, and maintains the status quo. The Gormaks are stuck in an inferior position in their own corner, not even allowed to leave the planet. This does not prevent them from trying regularly, developing in their opponents' weak point, technology. And since King Jokull is their leader, they are particularly aggressive and more organized than ever. Jokull who claims to have clairvoyance gifts like the Voss mystics. 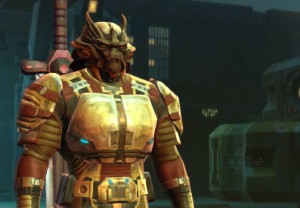 Between the Voss so focused on the visions of their mystics and the Gormaks preparing for a new war, no one questions these strange statues in the ruins, representing fighters belonging to neither one race nor the other. To an outside observer, the resemblance to the Jedi is striking. But how ? The answer may lie in the Dark Heart, a territory where no one can approach without going mad, whether they belong to one side or the other. The domain of the dark entity Sel-Makor. Even the few rituals known to protect themselves are not foolproof. One day, a human left without knowing where he came from but as he had with him elements of a prophecy, no mystic or interpreter asked him a question. This is the greatest story that runs in this region. But there are also the whispers. Those who say the Voss and Gormak were once one and the same people, who tore themselves apart when the Jedi tried to teach them the Force and followers of the Dark Side caused internal conflict within the Order. Whether this is true or not, it is a difficult affirmation to shout from the rooftops as the enmity between the two peoples is strong. The two civilizations would have to question themselves to accept it. 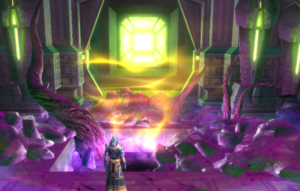 Such a questioning would take time, and would paralyze any action taken towards the outside, the rest of the galaxy. Republic and Empire ambassadors realize that this is precisely the sort of thing they have to avoid in order to bring mystics and their visions of the Force back to their camp. They already have enough to do to convince the Three of the Voss. Already that these take all their time with their prophecies and take several steps back each time they take one forward. In order to bring back members of Voss, perhaps there are other elements to be relied upon. Every society has its misfits, and they always have a social network. By offering them another way of life, perhaps we can push the stone that will trigger the avalanche. Or a powerful group, which will influence politics according to the law of the trusts. These are avenues to be explored, and in ten years of negotiations, the ambassadors cannot be satisfied with the current status quo. Will someone be able to finally unblock the situation?

add a comment of SWTOR - Voss, the world of mystics