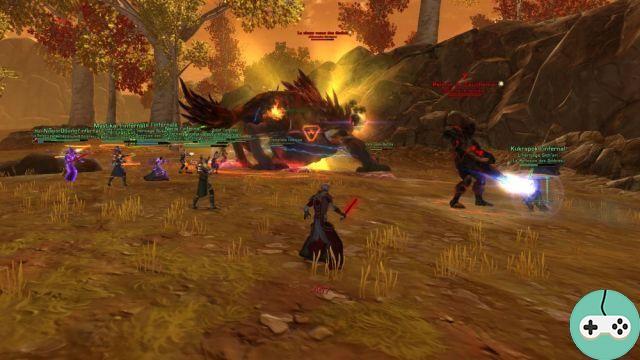 I am Sephiyo, GM of the Reflexion des Ombres guild and today I offer you a guide on the new World Boss on Voss: the Nightmare Pilgrim. We killed this boss after patch 1.2.3 which fixes the fact that the stone to summon it can get stuck (the previous week we tried it, then the stone was bugged for 1 week). This will have been his first death! This guide is divided into several parts: preparation, combat and rewards.

I emphasize the fact that this World Boss is essential, indeed, it is the only way to equip campaign boots in PVE. Hope you find this helpful, we'll be posting a video sometime around May 22nd.

Planet: Voss
Coordinates: click on the item in -6, 1317
Object to click: Forbidden knowledge
Raid: 16 players (otherwise difficult enrage and if> 16: your debuff has more stacks and you take more damage)
Enrage: 6mn30 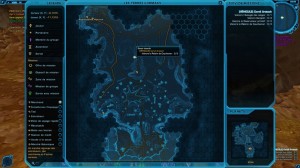 Before going, you must purchase the item "Gormak Energy Cell RythmAlpha Suppressor" for 30 daily marks on Belsavis (lasts 4h and resists after death): bound when picked up.

It is also possible to buy the blueprint for 10 daily marks, you must have either the Crafting 400 profession or the Artifice 400 profession. The item is then linked when equipped.

The components needed to craft the item with crafting weapons are:

The components needed to craft the Gormak Crystal RythmAlpha Suppressor with Artifice are:

To find the perfect Upari Crystal: same as for the enriched Duracier, ie: 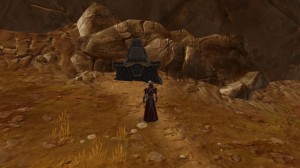 Area damage
There are several areas: red, white, yellow. (white freezes those in it). To dodge! Even the tank on the boss will have to get out of it, otherwise he will be stunned and may lose aggro. If the boss turns around and makes his cone attack, the raid's death is guaranteed. 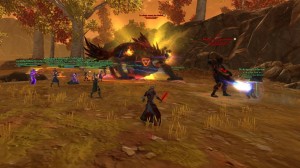 strategies
1 tank on the pilgrim and 2 on the add. The latter does not necessarily have to be dismissed because it only hits one person. Tanks that are on the add-on must regain aggro when one has the "Damage Vulnerability" debuff.
You have to DPS the add and kill it first.

Well interrupt the add! (make an order): if there are few interruptions, it will surely be the death of your raid (dying tank).

After 1mn, the pilgrim will put on a shield, then 1mn30 later he will put the “Blood Mark” debuff on several people. At this point, STOP DPS! (advised to stop dps when the boss puts on the shield to be sure). Each one checks if he has the debuff (possible that it appears a little later with the delay): if he has it, he must DPS the pilgrim and not the add on pain of dying! Be careful, the debuff lasts 1mn, so the boss will relaunch his shield every 1mn of the debuff, it will also be necessary to stop DPS on the boss! If one of the tanks on the add has it, it will have to change with the tank on the pilgrim until it is no longer the debuff, if 2 tanks have it, one will die.

When the debuff is finished you have to go back to the add, and so on. It will always be necessary to check not to have the debuff, but it always throws its shield before, so it is easy to anticipate. If you ever get the debuff and the pilgrim has put on his shield, if you can heal, DO IT, you don't have to do anything else! If any DPS die, it will surely cause the raid to die from Enrage!

Once the add is dead, the Pilgrim becomes enraged, it will then be necessary to kill it as quickly as possible, but the fight becomes much easier once the add is less. It is not a problem if when you kill the add, the pilgrim has at least 25% left, this enrage is easy to hold (it is the timer enrage which is synonymous with the death of the raid). I do not advise you to try to take the boss down during the 1mn30 from the start, because if the boss is at 8%, he will be under shield all the time and suddenly people who have the blood mark will no longer be useful !

The heals: it's an intense boss because a lot of damage on the tanks, and you have to move a lot because of the zones. 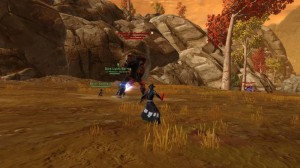 We notice that it is only possible to have campaign boots thanks to this WB! 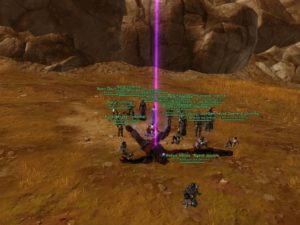 Here we are, we hope you enjoyed this guide and may be of use to you. If you want to take a look at us it's here.

SWTOR - Meeting with the founders of BioWare

Add a comment from SWTOR - World Boss: The Nightmare Pilgrim