The Empire launches an offensive on the Jedi home planet, where the Grand Jedi Council is located. An attack that comes at the very moment when the Republic has decided on an Incursion on Korriban. Funny coincidence. 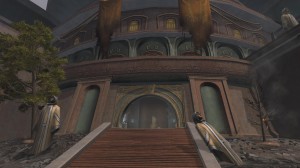 This Flashpoint is doable by both factions, in a different context, but bosses, although their names differ, have the same abilities (with different names), regardless of which side you are on.

There are two types of enemies to beware of. 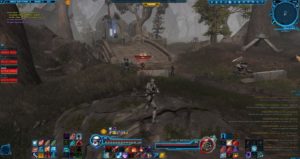 You find them on all the packs before the first boss and are able to pose real difficulties to the group. They launch a firebomb at the biggest threat, which takes the form of a red damage zone. To top it off, the chubby officers (not found on all packs) will stun you and the combination of the two can cause the Tank to go up in smoke! The best is therefore to target them as a priority (failing to be able to control them) and especially to interrupt their incantations. 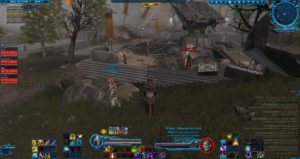 You will find them in the objective pursuit before the second boss. Not that they hurt nor that the packs are particularly difficult, but if like me, you like to organize your groups in a well-ordered way, they will make an indescribable mess with their projection at 30 meters. Also ask a DPS to take them one on one or stick a grenade on them (they are weak type I remind you so can be stunned easily). 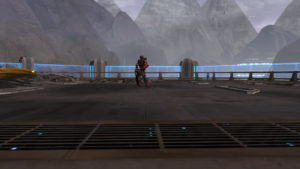 Here everything is a question of placement and if everyone plays their part, it does not pose any difficulties even for the healer.

There are 2 distinct phases for this boss, this one will follow one another during the fight.

The boss is in the center of the room and will ALWAYS channel in this order:

Here the Tank takes the boss and turns him over in the classic way. However, he must be careful to get out of the area pounded by the successive Volleys of mortar / Deaths from the sky.

To add a little difficulty, the boss will regularly during this phase cast a "Death from the sky". Its damage is significant, but even if the area covered is a bit larger than that of the mortar volley, it is perfectly avoidable and MUST be avoided. You have plenty of time, the first tick only hits 4 seconds after the area appears.


IMMEDIATELY after the end of the second Mortar Volley, 2 "strong" type soldiers will appear in the four corners of the room. 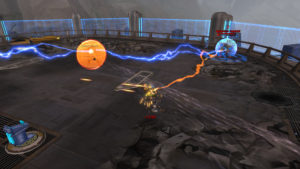 You must first know:

The strategy is therefore as follows: 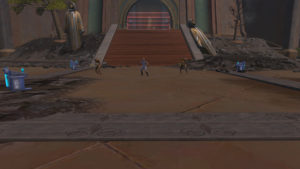 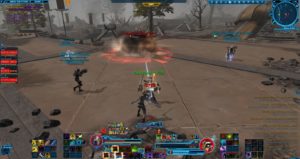 From this moment, 2 phases will be repeated successively.

The boss casts a camouflage (this one is long enough you have time to see it coming) and disappears to make way for 2 droids.

To locate them I will choose the Jedi Temple as a reference.

Anyway, it is imperative to get the droids down as quickly as possible so that the next phase does not overlap with this one. Once the droids are dead, if the boss has not yet reappeared, remember to regroup in the center of the area to facilitate healing and what follows.

The boss comes back and poses (not always but 2 times out of 3) on a limb randomly a damage over time (DoT) which is very very bad (it takes the form of a small dagger). 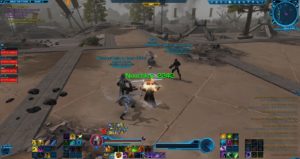 Hence the interest of being grouped so that the healer (or yourself) can dispel the DoT instantly. Note that if you are in full health, this DoT will not kill you but you will focus the attention of the healer and the boss in the meantime does not deprive himself to hurt others, if you add the reinforcements that you did not have. time to finish ... CRITICAL FAILURE! 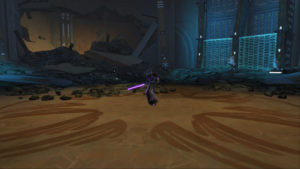 The fight is broken down into three phases:

Phase 1: the Tank takes the boss and all players hit him. However, be careful of the purple damage areas scattered all over the room, they hurt a lot. Regularly, the Tank is thrown by the boss which has the effect of reinitializing his aggro. So pay attention to this

Phase 2: The boss focuses on one of the datacrons in the room, all players MUST focus on this one. If you take too long to destroy the datacron, the boss recovers all of his life. Then it's up to you to see ... 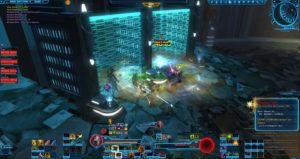 Phase 3: The boss surrounds himself with a shield which makes him insensitive to all types of damage and all players are targeted by purple damage zones on a regular basis. Here again, don't start running all over the place! One step is usually enough to get you out of the area, and the less you move, the less areas the room is filled with. 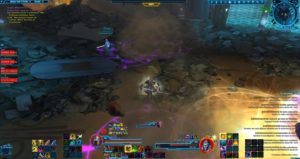