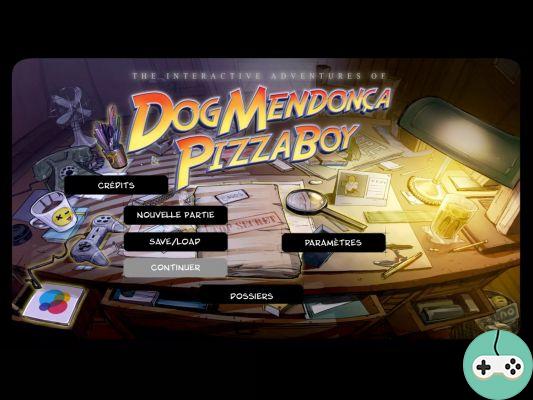 The Interactive Adventures of Dog Mendonça & PizzaBoy is a point-and-click adventure game adapting the graphic novel The Adventures of Dog Mendonça & PizzaBoy, a comic created by Filipe Melo and illustrated by Juan Cavia and Santiago Villa. If you don't know, three volumes have been released by Dark Horse Comics (in the US) and Tinta-da-China (in Portugal), recounting the tribulations of a young pizza delivery boy, Eurico, who works for a military detective. occult, and incidentally werewolf Dog Mendonça, helped by a demon of sixty thousand years resembling a girl and a gargoyle who has only her head. A final story was subsequently written for the 25th anniversary of Dark Horse Presents, with the participation of Frank Miller and Mike Mignola.

The Interactive Adventures of Dog Mendonça & PizzaBoy takes the atypical heroes of the graphic novel in an original story written by the creators. Developed by the OKAM studio, the game was partially funded through a crowdfunding campaign conducted on Kickstarter in November 2014. The game was released in March 2016 on computers (PC, Windows and Linux), notably available on Steam.

And today, the game arrives on mobile, in iOS version for the moment. I let you discover the trailer created for the occasion which will allow you to discover the graphic touch and the special atmosphere.

This adventure game is a point-and-click taking up all the standards of the genre. By touching an interactive element, three actions are proposed: speak (a mouth), take (a hand) or observe (an eye). And even if for objects, the interaction of the mouth will most of the time result in a gesture of disgust from the character.


Once collected, the items go directly to the inventory symbolized as the inside of the hero's cloak. An eye launches a small description of the object and, by clicking on it, the object can be brought into the scene to initiate an interaction. A small notebook at the bottom of the inventory displays very detailed advice, almost the solution, organized by large subjects (which avoids learning about points that you would not want to know). I admit that I like this option because there is nothing worse than being stupidly blocked because we do not think of a possibility. And if you want to search for yourself, just do not open the notebook (even if the temptation is great)! Another in-game help, the magnifying glass at the bottom left, displays the interactive elements visible on the screen. So, thanks to all this, I was able to move forward in my investigation without asking myself too many questions. 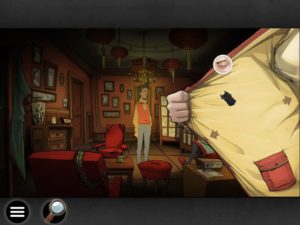 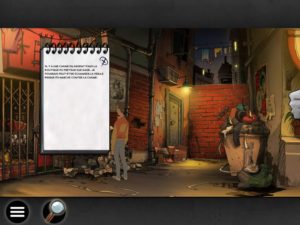 As for the dialogues, they are rather classic when it comes to simply chatting with the NPC. On the other hand, when it is a character who has information useful for the investigation, it takes place in the form of a mini-game of questions and answers where you have to choose the hero's attitude to make him confess what is happening. 'he knows. Fortunately, the characters do not have a great memory and it is possible to try your luck as many times as necessary. 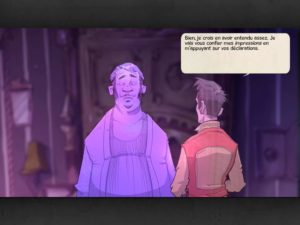 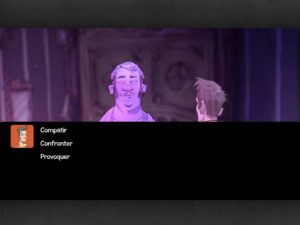 To move from one table to another, small arrows are displayed at the doors and entrances. Even if there is a fast loading most of the time, it is necessary from time to time for the character to go to the place which therefore sometimes lengthens the round trips a little unnecessarily. 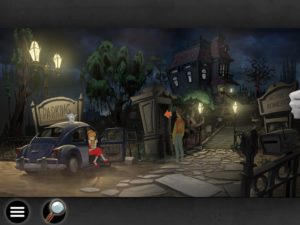 The humor is omnipresent, the zany adventure against a background of pleasant jazz music and the convincing actors (the voices are in English, the texts in spanish). It all begins as you may have seen in the trailer with our heroes tied up, heads in the air, above a fire. They will explain what happened so that they find themselves in this situation against the backdrop of a gypsy curse and monsters. The dog turns into a ghostly mastiff, the dead tell what happened to them and the little demoness is gentleness and tact embodied! All the graphics are made by hand, as are the cutscenes which are represented in the form of cartoon boxes. 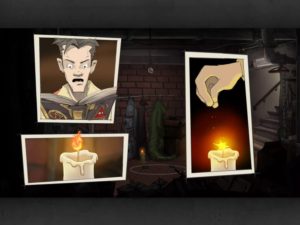 And there's an even a fighting mini-game at one point! 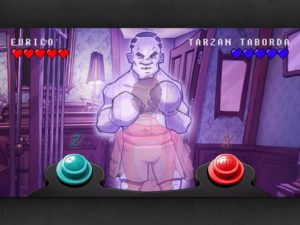 Mobile technology is bound to be very suited to the genre and The Interactive Adventures of Dog Mendonça & PizzaBoy is no exception. As long as your tablet is of a reasonable size, the adventure will snatch you into the strange world of comics in this exclusive story. The somewhat limited animation and the slowness of the hero's walk are sometimes a little annoying, but the investigation quickly makes you forget these small inconveniences. 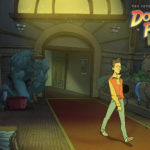 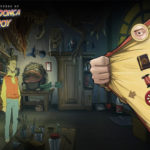 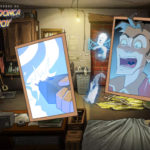 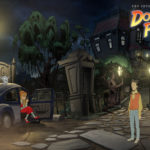