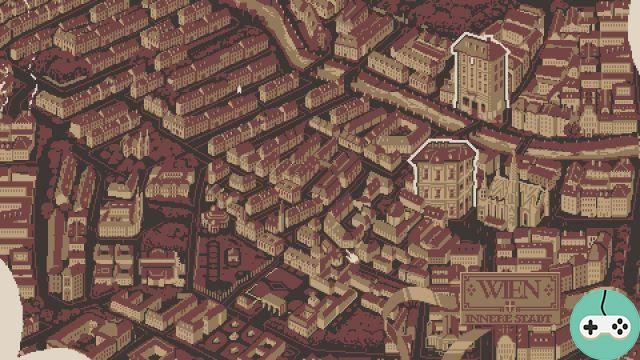 In September 2016, I tested episode 1 of The Lion's Long, a game combining narrative and interactive adventure, to use my own words. In Episode 1, we followed Wilma where we could make choices like in a Visual Novel and interact with the setting like a point & click. The result was a successful game with an engaging atmosphere and story.

Episode 2 was released at the end of 2016, then recently on the 3rd. It is therefore an opportunity to catch up on my delay and to explore Anthology and Derivation.

We start this episode 2 in Vienna, in a social evening. We meet the Markerts, the grandfather, a famous mountaineer, is accompanied by his grandson, Franz, a painter whose talent impressed the host of the evening. 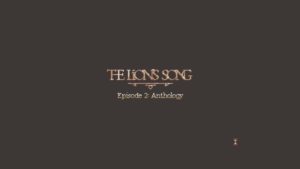 Very quickly, we learn that Franz is making portraits while trying to capture his entire model. I then see things differently, like Franz. He discovers the layers of personality that make up people and this is what inspires him in his painting.

I also note a nod to the first episode: one of the artist's canvases represents Wilma. 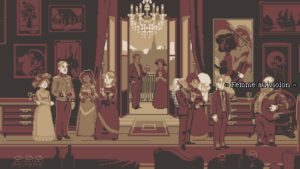 I find the small defect of the first episode, namely this too pixelated font. The choice of its color is sometimes questionable, especially during the very first scene: an aggressive neon green for one of the characters.

The sound environment is always neat. After the socialite evening, I find myself on a view of Vienna where the city seems more alive than ever. We hear the background noise of the main streets, a horse neighing ... If two buildings are highlighted, others are to be discovered while walking, allowing you to unlock an achievement. 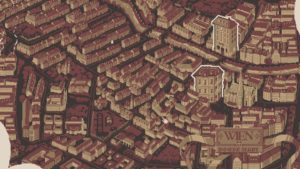 I decide to go to Franz's studio to start painting and observe the artist in his den. The choices of conversations are numerous, giving free rein to Franz's talent, to his desire to paint, to this obsession to discover every layer of his model's personality. You can feel him feverish, nervous, almost terrified at the idea of ​​not succeeding.

I will not reveal everything to you and leave it there for this episode 2. We find this quest for the artist, which concerns his own personality but also his art. As with the first one, it took me an hour to complete it. The end of the episode gives some statistics, allowing you to see if other players have made the same choices as you. If you want to see mine, open the tag below.

This episode 2 is as enjoyable to play as the first, still quite strong emotionally and the breadth of the choices promises a great replayability. Let's not forget that each episode influences the others. 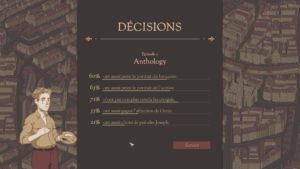 We leave art to meet Emma Recniczek, a mathematician. The story begins in a cafe where the young woman wants at all costs to attend the meeting of the Radius, a club of mathematicians. From the outset, we feel that we are not really welcome. 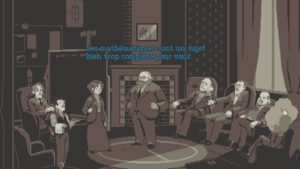 Emma thinks about math even while working in the library. She would like so much to share her theories and move forward on them, but her word is not considered as she is a woman. When he left the library one evening, the idea occurred to him to pass himself off as a man. Emma will then become Emil and try to be accepted by the Radius.

If this solution seemed like a good idea, the road ahead remains strewn with pitfalls.

This time, there is no question of composing or painting, we will have to help Emma to come to the end of her theory. I appreciate less the gameplay which makes us manipulate curves and mathematical representations this time. It really is a matter of taste and I have no doubt that others will appreciate it, just as the subject will speak to them more than to me. 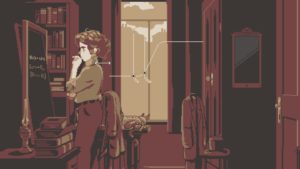 The link between the other episodes of the game is indeed present. For example, I ran into Franz from episode 2 in a scene that I had played in episode Anthology! It's very interesting to see the scene from another angle and to see the impact it can have on Emma / Emil, but also on Franz. I want to go back and explore the other episodes even more now. 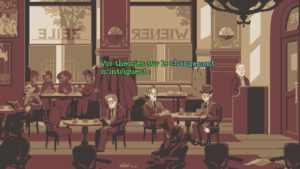 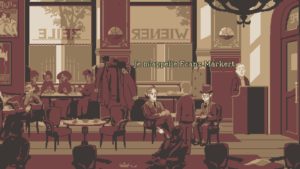 The decor being the same, we find the soundtrack of episode 2. The quality is therefore always there, but I would have liked a little more to differentiate more Derivation from Anthology.

Despite these small complaints, Derivation remains a good episode with a very endearing character, whom I wanted to see succeed, evolve, not give up. The emotions remain strong and the unfolding of the story is as well controlled as in the previous episodes.

We end with the statistics of the episode. I feel like it took me longer to finish it. 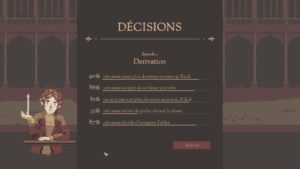 I can't wait to discover episode 4! Thanks to Season Pass, you can acquire the full for 9,99. Otherwise, episode 1 is free, a good opportunity to test and see if the atmosphere pleases you before possibly investing.

Add a comment from The Lion's Song - Episodes 2 and 3