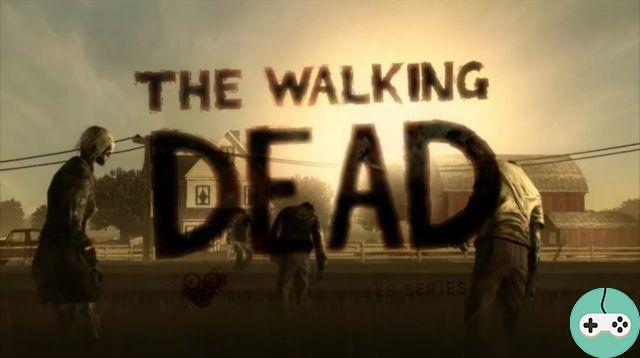 I plunged into The Walking Dead like others wallow in their couch to spend their evening watching TV: brain in "OFF" mode, feet crossed on the table and go ahead and I chain the episodes! But it was only after seeing the second season that I learned of the existence of Comic books and the game from Telltale Games. Started a few days ago, here are my first impressions of this game that has everything to impress me. 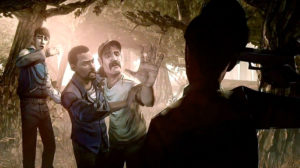 The Walking Dead est a "point & click" game. A story unfolds before our eyes, through a rather nice stylized graphics, and we intervene from time to time to choose what actions will be taken by the main character. Here is Lee Everett, a university professor. Just like sheriff Rick Grimes in the TV series and comics, our character is immediately found in survival situation after a "shock" of which I will hide the details and we will have to lead it through the various adventures of history. For starters, survive the first moments of panic. Then become aware of the reality of Zombies, find a weapon, find help, find a goal ...

We quickly get into the game, no time to waste, and for the MMO player that I am, this is not without some concerns. First, I don't know the game's keyboard shortcuts, I don't know the key layout, and I don't know how The Walking Dead is played. Never mind ! We'll see how it goes. And there, PAF! The first zombie I meet kills me. 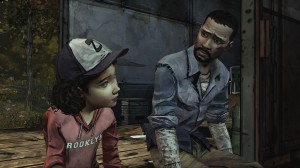 Yeah ... killed by a dusty old skin out of a closet. What a shame. A chance, the game invites me to take over the stage, which I hasten to do in order to settle accounts with the bloody old shrew. I start again, the old woman appears behind me, I turn around, she grabs me and bites my neck. I die a second time!

Yes, but this time I noticed a detail: a big "A" flashing in the center of two rafters while the zombie woman eats me, that must be an indication of what to do next. So I relaunch the scene for the third time and frantically tap the corresponding key when the "A" appears on the screen. No chance, we are not in an MMO, that would have been too simple. No, you have to press the "A" key, yes, but it is the left mouse button that must be pressed frantically for the "A" action to really take place here! It seems obvious said like that and I know how bad you think of me at this moment ^^ but with the atmosphere of the game and the details to watch / find on the screen (sometimes you have to click on objects ) old people have better watch out! And start over. Try and miss again my dear!

The ambiance: Did I tell you about the vibe of The Walking Dead? What an atmosphere! Unbelievable. We play this game and we don't really feel like we're playing a game. We follow the story, we intervene at the opportune moments, a few clicks here and there but it's the story that we holds in suspense and we really have the impression of watching the TV series. Obviously our intervention is essential. Unlike other games, it is not our skill, speed or dexterity that is tested. No, here it is rather our guts.

Yes, it takes courage to play The Walking Dead, some scenes are absolutely disgusting, but that's expected in a zombie story, right? and the choices we are driven to make not only always have an important influence on the unfolding of the story but are also very often terribly painful. The Walking Dead, beyond its graphics and its scripted story, is above all a game whose the goal is to push us to our moral limits. As long as we are endowed with it ^^ It is therefore on our choices that everything is played out, for history and for our interest in continuing or restarting the game. What a game! (Are you okay, my enthusiasm shows?). Are we going to take care of this task rather than another? Are we going to intervene to save this or that person from the sharp fingers of the zombie emerging from behind the grove? Are we going to allow her to do what she wants or are we going to try to influence her to do something else? Are we going to feed the child or the father? 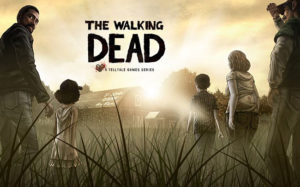 The Walking Dead is a game published by Telltale Games which won the Video Games Awards in 2012. I got it on Steam for $ 10 during a -75% promotion. For the price, there's nothing to say, it's terribly profitable and perfect for gamers a bit casu ^^ It is currently 24.99 €.


Do you want to be up to date and know all the tricks for your video games? In gamesmanagers.com we enjoy playing as much as you do and for that reason we offer you the best tricks, secrets or tips for you to play non-stop. We offer you quality content and always updated to keep you up to date. That's why, in our website, you will find not only videogame guides but also tricks, secrets and thousands of tips so you can play to the limit. Are you ready to get it? Enter now and enjoy your videogame!
FFXIV - FanFest in London ❯