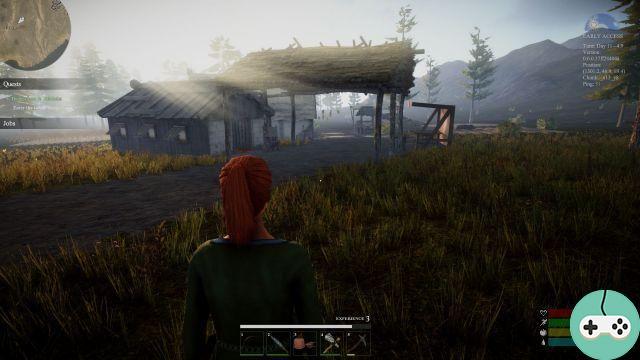 In 2017, on our last day of gamescom, I happened to stumble upon Valnir Rok's booth in the public area of ​​the show. Very quickly, I arranged a meeting a few hours later with one of the developers. He then introduced me to the game, even giving me the opportunity to capture my gameplay session. You can find my article following this interview here. I left this test rather convinced and impatient to play again in peace, at home. Thanks to a key given by the studio, it's done, and therefore the opportunity to redo an article after ten hours spent in game and thirteen levels mounted. 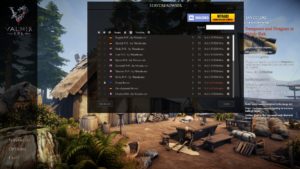 When launching the game, there is no option to host your own game and play solo. The only solution is to join a server, from a wide choice of official servers or not. I opt for Charles, a spanish PvE server who has no desire to cross swords with other players. In the end, the population being non-existent, I did not meet anyone in the game, no one to bother me!

Character creation is in line with current industry standards, with gauges to customize every part of the body, from muscle size to arm length. Despite my attempts to correct things, my avatar is still ugly. Besides, she has a funny look ... Finally, the game is in the third person view so most of the time I only see her red ponytail, which suits me perfectly. 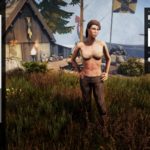 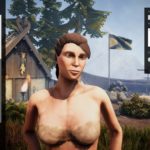 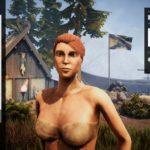 Once in play, unsurprisingly, I land half-naked on a beach where my boat was wrecked: my survival is a miracle as explained to me by an NPC who gives me some quests as a tutorial. This island inspired by Viking myths is populated by wild animals including ... wolves of course. A beach without any equipment and bloodthirsty wolves: all the codes of the survival game are well respected. 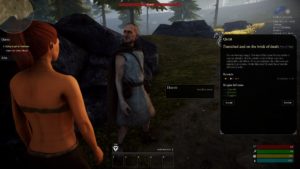 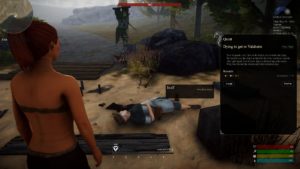 It doesn't take long for me to come across one and die in excruciating pain under its sharp fangs. I choose my place of reappearance a few hundred meters from the place of my death, I quickly return to the place of my death and discreetly pass behind the wolf to retrieve my personal effects and continue my adventure. Wolves are thankfully rare and, more importantly, aggressive creatures tend to let go of chases very quickly, making it possible to survive by cowardly fleeing whenever things go wrong. 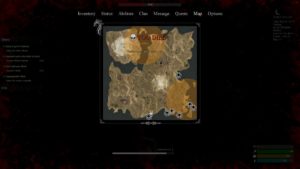 I move away from the beach in order to discover the world, or at least a little bit because I did not end up far enough from the south-east where I arrived. There are a few quests, although quickly I find myself stuck, not having the level to continue. The constants (life, food and water) are fairly simple to maintain at a good level, there is a great deal to eat and drink in this world, and the commodities do not perish. 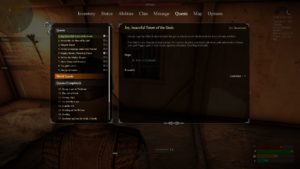 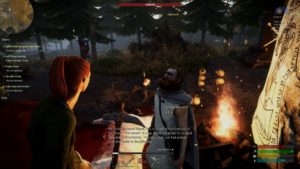 The graphics are correct without being transcendent, there are some rather nice light effects, even if the contrasts are a little exaggerated and make the whole unrealistic. The buildings are in a classic medieval style, with many half-timberings and thatched roofs. I feel like most of the houses where NPCs live were built with the same elements as in player crafting, which is pretty promising for player villages. 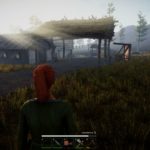 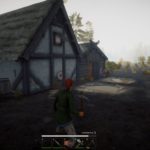 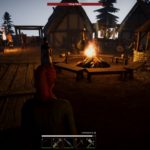 Day and night pass, also with weather and rain effects. On the other hand, the vegetation is unrealistic, with ubiquitous grass that has no thickness. 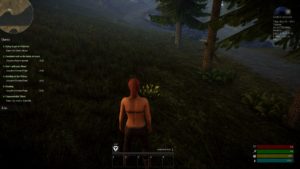 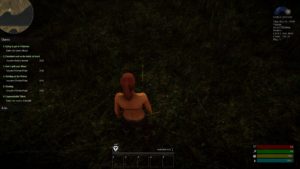 Interactive elements are collected: plants, bushes, rocks (stone, metal or clay), and trees of course. They are not highlighted, either by a color or a border, but they are still similar, which makes it easy to identify with habit. A simple passage nearby with the F key, and it is collected. For rocks or trees, on the other hand, you have to stay a while and spam the left mouse button once the pickup is initiated. 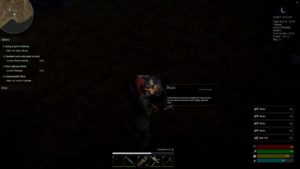 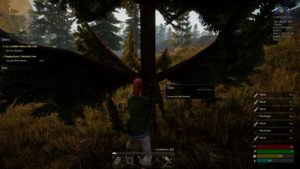 All of these resources combine to create items from the crafting interface. By default, no recipe is discovered, which requires testing to find what works in a sort of combination mini-game that is easily solved with a little common sense (and a Wiki). 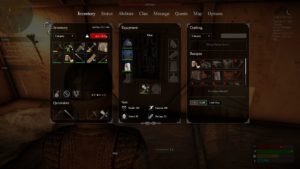 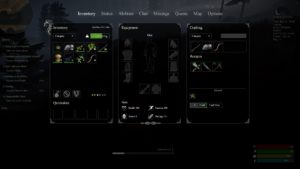 As always, I set out to create a house. I had the choice between wood and half-timbering, I chose the second, in a pretty valley below a small town, surrounded by a high fence to prevent the wolves from bothering me. 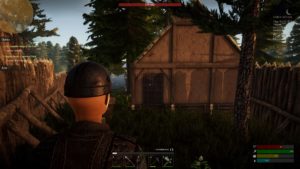 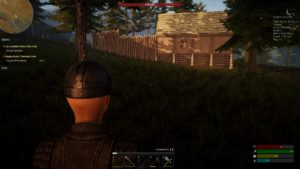 Inside, a table with its chairs, a fireplace for cold evenings (to cook the food), a stove (to melt the metal), and of course some furniture to decorate the whole (bed, cupboard, chest ...). For all this, I needed a lot of wood (and chopsticks), clay and vegetable fibers (treated in reed or twine). 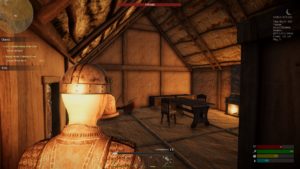 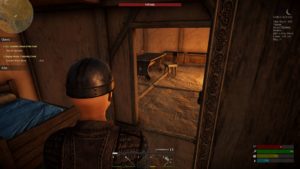 The item placement tool is similar to anything found on industry games, with a hologram that represents the item before it is placed. On the other hand, also the same problem, invisible elements sometimes prevent placement without the cause being clearly identified. 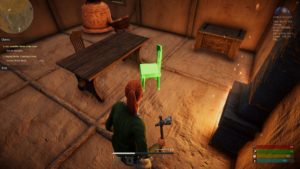 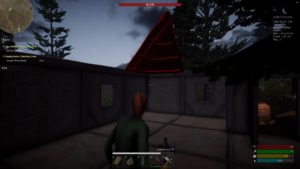 Any action performed in-game, whether combat or crafting, grants experience points, which advance through levels, each granting one ability point to invest in a tree following five branches: carpenter, worker of leather, blacksmith, builder, god and tailor. The first level costs only one point, then 3, 6 and finally 12, which allows you to quickly be able to do everything, but it will take a lot of progress to become a master in a field. 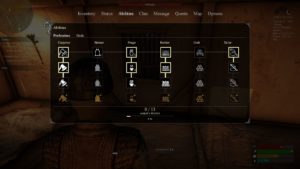 The three trees of the gods (Yggjur, Tjosull and Kerska) grant advantages to the character, increasing his base characteristics and his effectiveness. Of course, these are the same points as those to invest in craftsmanship so you have to make a choice: fighter or craftsman? 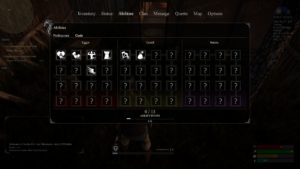 Valnir Rok is a survival game that unfortunately does not offer great originality compared to other games in the sector, whether through its crafting system, its progression or its graphics. The Nordic touch isn't enough, and the quests are too anecdotal to be truly remarkable. But don't be fooled, it's still a good survival / exploration game, I had a great time in this universe testing its very robust crafting and construction system, and I will without hesitation continue to follow its development, especially since the title is still in early access and its developers are actively working to add new content: the latest patch deployed on December 11 improves combat. But too often I have had the impression of finding myself in another universe and redoing things that have already been experienced / seen.

Amateurs of the genre, I leave you alone to judge. It's up to you to see if these arguments will make you want to try and try a new adventure, or if you will prefer to stay on your usual game, be it Conan Exiles, ARK: Survival Evolved or Rust:

The Division - Our opinion on the beta