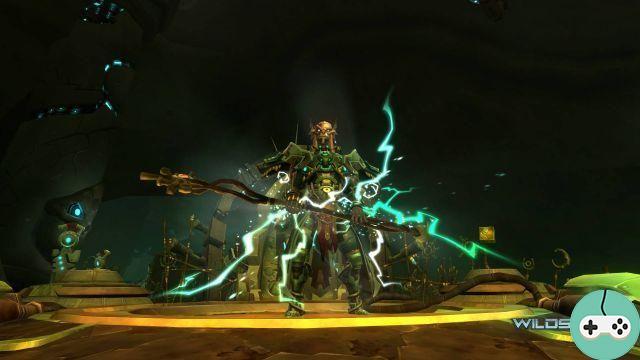 L'Antre d'Ouragriffe (Stormtalon's Lair) is one of the first two dungeons in WildStar. It is accessible from level 17 from the instance portal (Exiled Zone of Galeras, south of Thunder Call village), or from level 20 with group research. It is not necessary to discover the entrance to enter the queue, this facilitating access to the instance for the Dominion.

An instance of WildStar does not trade like a rush, you have to take your time, make the monster packs one by one, do not stay in the telegraphs, and not be afraid of dying especially when discovering the instance . 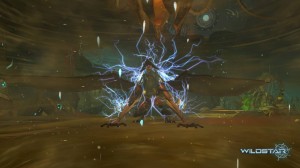 Among the most recalcitrant:

Thundercall Sentinels & Shamans
They come in pairs, the shaman is the priority target because he heals, interrupt him quickly. As for the sentries, they hit hard enough and make frontal telegraphs, dodge them or interrupt them. 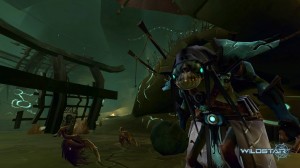 Skyborn Tempest
It charges then expels the tank and leaves on its path an electrified zone which will inflict regular damage, do not stay in it.
It will also summon several tornadoes, not much damage but they slow down sharply and propel into the air, preventing certain spells from being cast.

Thundercall  StormWeaver
Stuns a player and then uses a very powerful 1.5K damage / sec attack on the stun target, the rest of the party must interrupt, otherwise the player is killed. 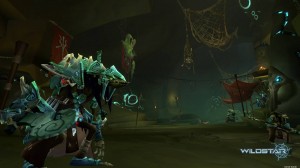 Blade-Wind the Invoker is the first and toughest boss in the instance.

You'll notice he's surrounded by 4 Channelers around him: Combat is pretty straightforward on paper, when Blade-Wind is shielded, Channelers aren't, and vice versa. It will therefore be necessary to damage those who do not have a shield, to avoid the telegraphs and to stay together. 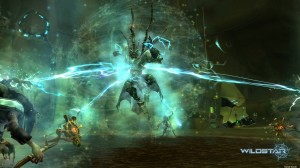 A fairly simple phase, let the tank take aggro at first, then start damaging the boss. He hits hard enough with his basic attack, the tank must always be above 75% health (This is the first cause of wipe on this phase).

Blade-Wind also regularly launches a large cross-shaped telegraph, which can be interrupted, but one dodge is enough.

Because of the damage inflicted by the boss, the focus of your healer will be strained, so you must limit the damage taken by the group.

The goal of this phase is to kill one by one the 4 "Channelers" around the boss to remove his shield. Synchronize with the rest of the group for the order, usually we start from the first to the left (From the entrance), then clockwise.
Never go alone, you will die! Stay together to help the healer.

Blade-Wind will launch lightning bolts at a random person, which will gradually charge while following the player, then remain fixed on the ground to finally do damage in the telegraph. The goal of the phase is to place as much lightning as possible under the "Channelers" to inflict 4K damage to them with each bolt of lightning. The more telegraphs you manage to put, the faster the phase will be (Because the boss at the same time does regular damage on the group, which lowers the focus of your healer).

To make it easier for you, always stay next to the "Channeler" to run quickly under him if you are targeted, then once the telegraph has become fixed, leave the area to avoid damage. With practice it goes away and makes the fight really dynamic.

When each "Channeler" dies, several balls of lightning will appear and stun people under their telegraphs. They will then move around the room, avoid them, they don't do much damage but stun is annoying especially if you are the target of a lightning bolt at the same time.

After disarmament, phase III begins. Attention the boss will have reset his aggro, it is quite possible that the healer is the target, use an "interrupt armor" on the tank or a spell allowing to reduce his aggro to avoid any problem.

The phase is similar to the first, the boss still hits the tank as hard, but keeping the lightning balls (Static Wisps) from phase II

Blade-Wind will also regularly make an enormous telegraph which covers the entire room but with “safe-spots” in which it will be necessary to take refuge as quickly as possible.

Stay together for healing, dodge telegraphs, lightning balls, keep the tank above 75% health and the boss should drop.

The combat is clearly not easy, it will take a learning time for each player to avoid the deaths, but it is really very fun and places well the difficulty desired by Carbine in PvE.

Aethros is the second boss of the instance, he is a great storm elemental who will be faced in a long room lined with tornadoes. The fight is easier than the previous boss, but paradoxically it's also easier to die very quickly. 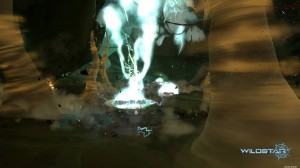 The phase is quite simple, there will just be a series of lightning telegraphs to avoid: Under each player, under Aethros, and then under two random players, always in that order.
After a while Aethros begins to cast a vanishing spell.

Three Bursts of Aethros then appear in place of the boss with a little over 60K hit points each.
The tank must quickly take them and the group must kill them trying to control them as much as possible. Be careful, however, to keep a check for the next phase.
When the last one dies, you are propelled to the entrance of the room, while Aethros returns to the other side of the room. This is the start of phase III.

Things are starting to get complicated here. The goal of the phase is to reach Aethros as quickly as possible to interrupt it., because he began to throw a storm which, if the casting ends, decimates the group.
Each player will therefore have previously placed an interrupt spell on their bar for this purpose.

During the race towards the boss, you will be hampered by the tornadoes which now move perpendicular to your path. They slow down and propel through the air, wasting your time.
There will also be very fast lightning bolts, round telegraphs on the ground, which deal 4K damage and a knockdown.

After joining and interrupting the boss, he goes back to phase I.

The phases will alternate until the death of the boss. 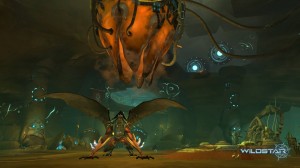 Let the tank take the aggro and start damaging the boss, watch out for the conical telegraph that targets the tank, he must be the only one to take it.

Two random players will be regularly targeted by lightning telegraphs, they don't do a lot of damage but knock back.

Periodically, Stormtalon kicks everyone out onto the cave walls, and stuns you on the spot. Break the stun and return quickly to interrupt the boss because a telegraph at 1K damage / second is covering the whole room. The boss interrupted the telegraph disappears.

It will do this expel / stun / shrinking telegraph combination multiple times during the phase.

Stormtalon will then cover the entire room with a telegraph except for a safe-spot centered on a player who usually always appears to be the tank.

Regroup quickly in the area, at this time the player targeted by the telegraph will again be targeted by a succession of small lightning telegraphs which will be motionless. The targeted player will have to move to avoid the small telegraphs, slowly enough for the other players to follow him (The safe-spot remains centered on the target player no matter what).

Do not go all over the place and the phase will go very simply without damage.
When the telegraph disappears, each player will be targeted by lightning, run to avoid them, they will stay a little while on the ground.

Stormtalon will alternate these phases until his death.

GW2 - The seeds of truth have arrived