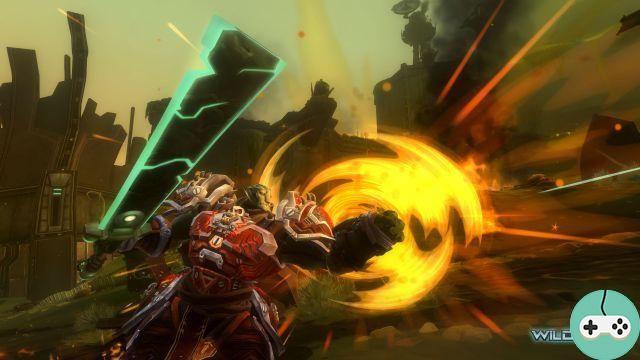 This Wednesday, we discover part of the LORE of Wildstar through the history of the Granok, race from which the sergeant comes.

LORE fans will be delighted, over the next few weeks the Wildstar team will unveil the different history of the races that make up the Exiles. Each of the races involved in signing the Exile Accords has their own story to tell, so we should learn more about the origins of the exiles by the end of the year!

The article in spanish is not yet available on the official website, I will give you my translation:

Several hundred years ago, the Granok civilization on the planet Gnox was quite primitive. They only had the most rudimentary levels of technology. The Granok lived in small, isolated tribes scattered across the surface of their home planet, following a Stoic philosophy known as the Stone Path.

The principles of this philosophy were simple, the world could evolve around them but the Granok were immutable like living stones in which their bodies would have been carved. They had been alike for tens of thousands of years and would stay that way forever.

Their lives were relatively simple and uncomplicated. They cultivated, designed armor and weapons, and warmly enjoyed brewing and drinking beer. They were skilled warriors, but not warriors.

If they occasionally fought each other, it was more than likely to be in a tavern brawl where both fighters ended with a good handshake, laughing and offering each other a new large tankard as a token of peace. very busy. They had what they needed on Gnox, and they were going to stay on Gnox.

Until the Dominion comes ... 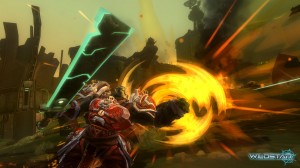 Detecting great potential in Granok's size and strength, the Dominion sent mechanical ambassadors to Gnox to facilitate their entry into the empire. They offered the tribal chiefs of the Granok clans knowledge and technology, asking in return that they kneel down and swear eternal loyalty to the emperor reigning over the Dominion.

Enraged by the insolence of these mechanical beings, the leaders immediately refused, making it clear to the ambassadors that they had to leave their planet and never return. When the ambassadors suggested that it would be in their best interests to reconsider their positions, the Granok responded by reducing them to a smoldering heap of junk.

Within hours, the Emperor received the news of the disappearance of his ambassadors. Furious, he decreed the Granok as dangerous, an uncontrollable race that needed to be eliminated for the sake of the empire. War was declared on the planet Gnox, and the mighty Dominion legions deployed from the planet Cassus. 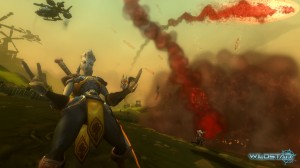 The Dominion arrived on Gnox with overwhelming forces, assuming they would quickly wipe out the Granok tribes. But the Empire had gravely underestimated the resistance of the Granok warriors. Although their weapons were primitive, they were courageous and tireless on the battlefield and their war machines solidly built and surprisingly destructive.

The war dragged on for months on end, with both sides suffering heavy losses, but soon the Dominion's superior technology and weaponry began to tip the scales, allowing the Empire to prevail over the powerful, and yet primitives, armaments of the Granok warriors.


Unperturbed, the tribal leaders stoically accepted their impending deaths, proud of having walked the Stone Path to that bitter end.

However, there were some among the Granok who disagreed with the chiefs. A young warchief named Durek refused to accept death and defeat, believing that the Granok were capable of defeating these invaders. In a series of daring raids, Durek led lightning war actions in Dominion camps, stealing weapons, armor, and other powerful military technology.

Within weeks, the ranks of the Granok insurgents began to turn the tide, using weapons confiscated from the Dominion to win a number of key battles. Without the advantage of superior technology, Dominion troops soon found themselves on the losing side in this war. Beaten and bloodied, the legions were eventually driven from Gnox and returned to the planet Cassus. 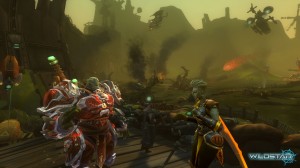 After the war, Durek and his followers returned victorious to their tribes, armed to the teeth with Dominion weapons. But instead of being greeted as heroes, they were greeted with coldness and hostility by the Granok leaders, who viewed their use of Dominion technology as a betrayal of the Stone Path.

Durek was branded as the Stonebreaker, and his army of brave, seasoned warriors were forever exiled from the planet Gnox.

Using the Dominion ships they had captured, Stonebreaker Durek and his followers set off for the stars. Forming a loosely structured Free Company, they began to ply their trade as interplanetary mercenaries and made a name for themselves as fierce fighters who can be counted on as long as they get paid.

Having traveled the galaxy as soldiers of fortune, the Free Companies retain a deep hatred for the Dominion and look forward to the day when they can settle scores in blood.

Here you now know a little more about the Granok and as a bonus we had the right to a preview of the appearance that the female Granok characters can have!

I hope I relayed this story to you as best as possible before its official translation.