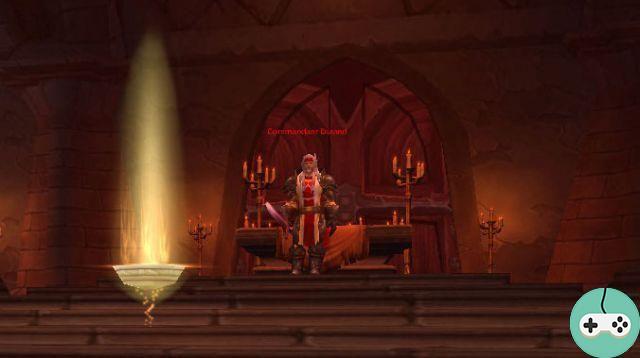 This dungeon is accessible in normal around levels 30 and in heroic for characters of level 90 and offers 3 bosses. I will show you some ways to make the ballad go smoothly in heroic level 90 mode. For the record, as with all dungeons and raids now, you can find the list of boss abilities in the Dungeon Codex (Shift-J) if you want more information on a particular spell.

The fanatic leaders of the crusade lead their followers from the Scarlet Cathedral in the heart of the monastery. Heavily defended, it serves as the headquarters for order, and some of the most fundamentalist crusaders roam its corridors.

Brought up to date, this old instance dating from Vanilla reminded me of good memories especially that, by chance of the random group, our tank was a paladin in T2. 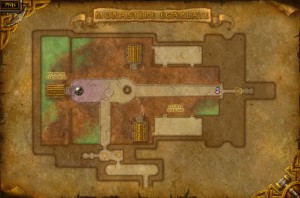 In the cemetery where you arrive, you have to be vigilant with the piles of corpses. Indeed, as long as this stack, with only 590k points of life, is not destroyed, undead will continually arrive. 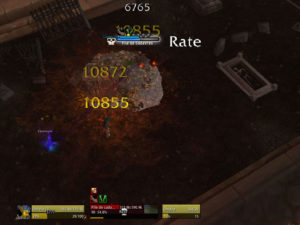 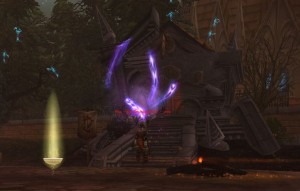 Thalnos carved out a reputation within the Scarlet Crusade for the brutal interrogation methods he used to "purify" new recruits. A sadistic mage, he eventually contracted the undead plague and rose in the form of a terrifying skeleton. He now haunts the monastery cemetery, thirsting for revenge, ordering his apparitions and zombies to attack anyone who enters his ungodly realm.

This boss is really trivial and does not require to understand much. He will summon many additional enemies, fallen crusaders and invested zombies, which must be killed while taking care of the master. It is just necessary to pay attention to the areas on the ground, waterspouts, large purple areas, which of course you have to get out of. 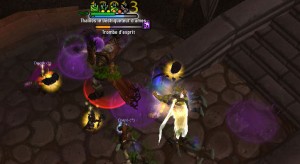 Once this boss is killed, continue your way to the square of the cathedral where Brother Korloff is located. 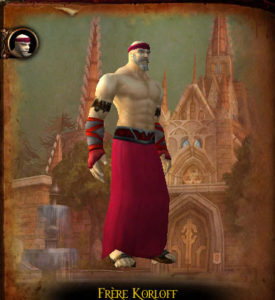 Brother Korloff learned the formidable arts of monks from Pandaren Ambassadors on their first trip to Azeroth. When he demonstrated his style to his superiors of the crusade, they unanimously decided that he would train an entire generation of initiates in the way of the monk.

This boss loves fire and should be wary of it. He does damage in a cone in front of him with his flaming fist technique, so like most bosses, he must be with his back to the group. What really hurts is his flame storm kick. He yells "When we're dead, we're dead" and jumps on a random player. It performs an area of ​​stinging fire at the point of impact: needless to say, the targeted player and his close companions must move quickly to get out of range. 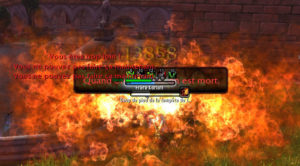 A Man and a Flame: Have Brother Korloff set 6 nearby training dummies on fire and then defeat him.


Once the brother is killed, we enter the cathedral which, faithful to the origins, is filled with followers of the crusade. In the background, we find Commander Durand who launches the final meeting. 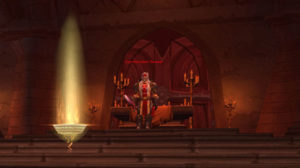 When she was young, Sally Blanchetête saw her family succumb to the horrors of the undead plague on a trip north of Lordaeron. She was forced to annihilate her parents and siblings when they rose to their feet as Scourge servants, and rage and guilt made her sanity falter. Since then, she has become a ruthless priestess, and the only pleasure that still lights up her life is destroying the living dead.

Commander Durand is very classic, his only interesting ability being the Daring Strike which causes him to charge through the party, dealing damage in the process.

Once dead, the Grand Inquisitor Blanchetête comes out of the back room to help her ("you will pay for this treachery!"). She is a priestess, she heals herself and does damage with Holy Punishment but the only dangerous spell she casts is her mass resurrection which must absolutely be interrupted (otherwise many resurrected adds join the fight). After a while, annoyed at not being able to bring the Commander back to life, she will stun everyone and make her resurrection ("May my champion rise!").

The Commander gets up ("By your side, ma'am!") And the fight starts again, this time with the two bosses. They do not have any additional capacities and therefore do not present any particular difficulties. For convenience, to avoid her healing, I recommend killing the Inquisitor first before finishing off with the Commander.

And don't get up, this time: let the Grand Inquisitor launch Mass Resurrection, defeat all the resurrected Scarlet Judicators, then defeat Whitemane.

And now, the monastery is once again freed from the grip of the Scarlet Crusade thanks to you! You can see the strategy for the other part of the monastery: the scarlet halls.

Wildstar - About the Elder Games