Crush Your Enemies is an action-strategy game that puts the player in the shoes of a brutal, vulgar and savage viking who wants to do battle and conquer all the villages and castles on his way! 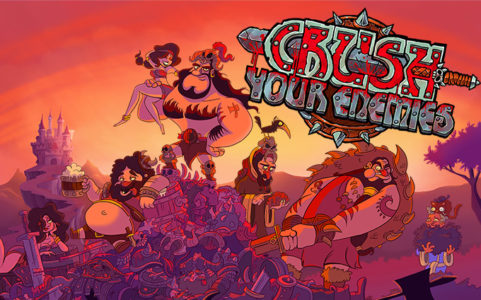 In early access for several months (a first preview of which is available on Games Managers), Crush Your Enemies is finally available since July 13, 2016.

In the world of Crush Your Enemies, the player is in the power of a bunch of muddy, drunk, vulgar and obnoxious barbarians who want ... well ... shave everything in their path and drink beer! The goal of the game is simple: crush your enemies! The story is ... Actually that's just it. The latter is really only there to justify the slaughter of enemies and nothing else. The dialogues are quite funny and offbeat even if (as far as I'm concerned) I find that the vulgar side becomes quite heavy after a few hours of playing. Read once or twice something like "I'm going to lay my necks on your throne ”or“ these earthy asses must bask like rabbits. - They don't ba * sent, they recruit ”it goes, but seeing this kind of message in the majority of the dialogues becomes rather heavy in the long run (at least, as far as I'm concerned, it depends on each one.) 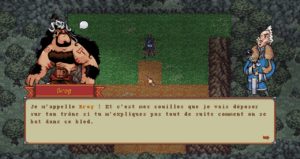 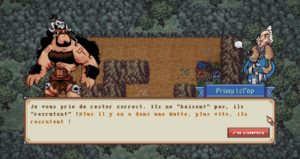 On the gameplay side, the player therefore controls hordes of barbarians and will have to complete one or more objectives main in order to successfully complete a mission and secondary objectives are also present in each game. The objectives are quite varied, but relatively repetitive in the long run, which is rather understandable given the quite large number of missions (more than 70) that goes from the objective which asks to kill all the enemies, passing to the one that asks the player to survive a certain number of times to slightly more complex objectives (defeating the enemies, but by first owning all the enemy buildings or by having units in certain specific buildings at the time of victory). 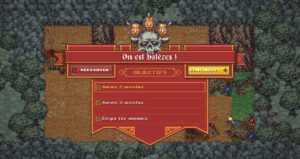 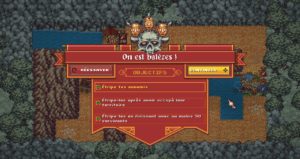 At first glance, the game seems to be simplistic, but becomes very complex as we advance. At first, the player only has basic units, hustlers only armed with their fists to smash the heads of enemies. The first missions will therefore be very simple and will require, for the most part, to rush into the heap by razing everything in its path. However, in order for the units to advance, it is first necessary to control fields. Fields can belong to you, belong to the enemy, or be neutral. To move freely on the ground, it will be necessary to have control of the fields. Where the game begins to become tactical is that it is possible to To "cut" a road to the enemy, thus transforming all the part not connected to the enemy fields in allied field, which will force the enemy to reconquer all the fields if he wishes to approach your camp. 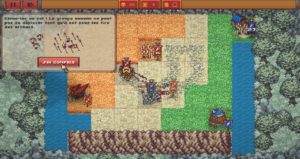 Apart from travel, there are also many buildings with different effects. The base building is used for recruit new units, at a speed which differs according to the number of units already present in the building. The more units there are, the faster the recruitment will be, which means making a choice, recruiting quickly, but having few or no units in the field, recruiting slowly, but having a lot of units in the field. field or divide its forces. While the first levels are easy, as the topography requires the enemy to pass fairly close to the recruiting building, the higher levels will offer many waypoints, enemy camps, etc. making the choice between recruiting / placing units quite technical and tactical. 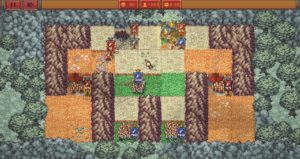 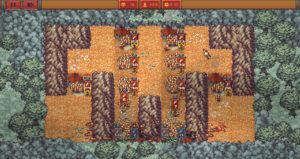 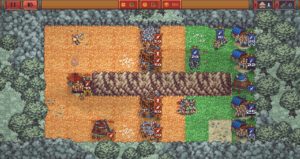 Among the other main buildings are barracks. There are several kinds that can be used to obtain advanced units, such as armed barbarians, archers, etc. Unlike the recruiting building, the barracks do not create new units, but transform basic units into advanced units. Another important point: if an advanced unit returns to a recruiting building, the latter again become simple "buggers" and it will be necessary to return the units to a barracks in order to transform them again.

The last buildings and not the least that I want to tell you about are the defense buildings. These are turrets able to attack from a distance and can do very high damage. To use them, you have to send a group of units inside to take control. Namely, the more units there are stationed in the turret, the more damage the turret will do.

All of these buildings are very useful, but you should know that enemies can use them as well. However, it is possible to destroy buildings under enemy control in order to rebuild them and have them under the player's control. And vice versa of course. 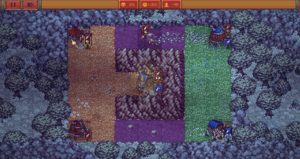 During the game, it is also possible touse objects (provided you have unlocked the merchant). They bring many benefits or bonuses, for example a temporary increase in damage, resistances or even the possibility of placing an encampment anywhere on the map in order to recruit a few units without having to return to the recruiting building. In order to purchase these advantages, it will be necessary to take possession of villages, the latter granting beer (the in-game currency) for each victory. 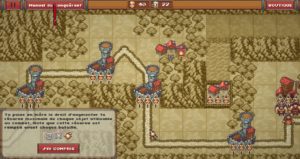 For my part, I admit that Crush Your Enemies didn't really appeal to me at first but after a few minutes of play I couldn't let go. The game is simple in its realization and handling, but becomes quite complex in its mastery. The only small flaw that I find in it, even if it is not necessarily one according to people, it is the dialogues which are quite vulgar and raw. The game offers more than 70 levels and will occupy for many hours (2 hours of play = fifteen levels).

I strongly recommend it, especially since it is only about ten euros!

Add a comment from Crush Your Enemies - Preview for release!