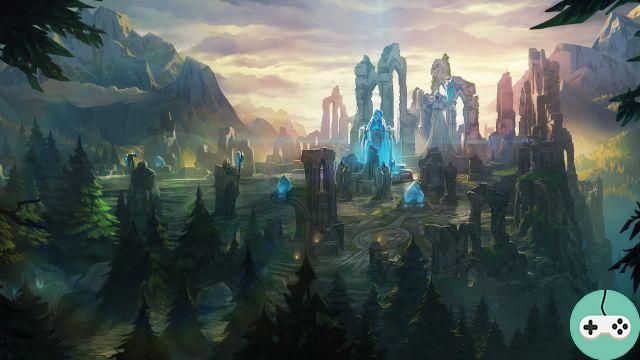 A video game player in your spare time, you heard about League of Legends aka LoL through a friend. You download the game and launch yourself into the Rift without knowing how to shoot your arrow with Ashe. So you decide to look for a guide to learn the different basics that are the pillars of LoL. That's convenient ! I will present to you through this guide the many basic parameters that you need to know if you want to improve in the game. The guide will be divided into 4 chapters which will be released over several days. 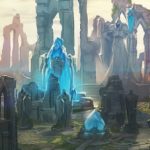 League of Legends allows you to play on multiple battlegrounds in different game modes (ARAM, 3v3 and 5v5). The most widespread is naturally the one present at high level and which gave the eSports scene that we know: 5 against 5. The games therefore take place on a field made up of 3 lanes (or Lanes) and a jungle. This land is none other than Summoner's Rift.

LoL is a MOBA (Multiplayer Online Battle Arena) in which the goal of the game is to destroy the enemy Nexus. The Summoner's Rift consists of 3 pathways called "lanes" (that's the name) each made up of 3 turrets and a inhibitor. In order to win the game, you must advance along these paths to the enemy Nexus.

The top lane is called the Top, the one in the middle Mid and the lower one Bot. It is on these routes that you will face the opposing team most of the time. 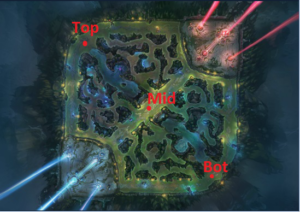 Between the tracks is the jungle, hunting ground of the player in the role of jungler. The jungle is occupied by neutral monsters that you can kill to get gold and experience. In addition, some monsters give you a temporary enchantment. The jungler uses a summoner spell specific to his role which is retribution (or smite in English). Using it on a neutral monster grants the jungler a temporary bonus. 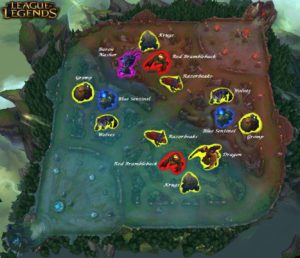 The Lycans are wolves located at the top of the midlane on the blue side and opposite for the red / purple side. Use the Punishment (summoner spell commonly known as Smite) on the two-headed alpha lycan (the big wolf) will allow you to summon a rift spirit who will patrol the area for 90 seconds. As soon as an opponent enters the quarter of the jungle where the patrol is located, the patrol moves over it, revealing it until it leaves. This is a little useful bonus at the start of the game, but it can be interesting after 20 minutes of play. 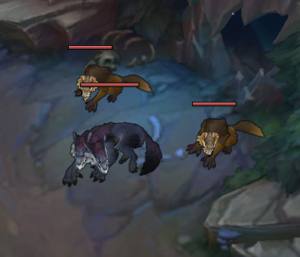 Gromp is a toad having eaten a strange mushroom which transformed it: it became huge and dry! The Smite grants the Donation of amanita, poisoning enemies attacking you and dealing magic damage over time. Gromp is very useful at the start of the game for the jungler because it grants a good amount of experience. 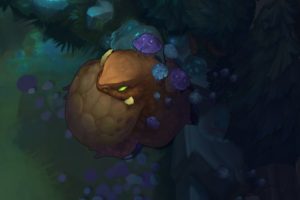 The crows are birds with low health points (HP) but inflicting good damage. Use your summoner spell Punishment on the big corbin will give you Sharp eye, which alerts you and gives you Magical vision (ability to see invisible units) when an enemy beacon spots you. Very useful for removing enemy vision beacons located in the nearby river. 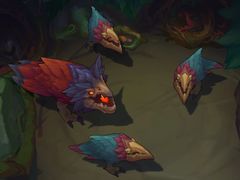 The Krugs are kind of very resistant golems that attack in melee. Smite ancestor Krug offers you the Gift of the heavy hand, which grants your basic attacks the ability to stun minions and monsters you hit in addition to dealing additional raw damage to turrets (this dispels the enchantment).

The scavengers are creatures close to crabs and which roam the 2 parts of the river. If you kill a Scavenger, you get a Vision Bubble and a sanctuary speed which increases the speed of movement (outside of combat) in front of Baron Nashor and the Dragon.

Enchantments are temporary bonuses that are more important than those granted by common jungle monsters. They are much more strategic because they last longer (until the end of the game for some). There are 4 of them in Summoner's Rift, each for a special camp.

The red bramble is one of the four great monsters that give a special enchantment. When you kill him, he will give you the enchantment called Red, which slows down your opponent on your basic attacks in addition to dealing damage to them. By inflicting Punishment in Red Bramble, you recover 20% of your maximum health. 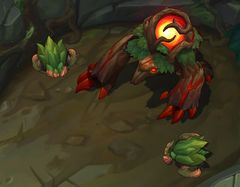 Le "Blue" as gamers are used to calling it is a grand golem resistant that attacks slowly. At his death, he will provide you with enchantment Blue which will give you 10% reduction in cooldowns (CoR) as well as increased mana regeneration. By inflicting Punishment at the Blue Sentry, you regain 25% of your max mana. 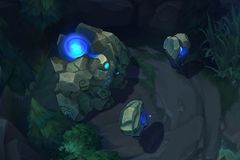 The Dragon is a powerful monster in an enclosure located in the river between the midlane and the botlane. Killing him grants you a permanent bonus for the rest of the game. The dragon is often the reason for multiple teamfights (fights between the two teams) because it provides significant advantages. Every time you kill the Dragon your team gets the following bonus except the 5th which lasts 3 minutes which can be recaptured by killing the dragon again. 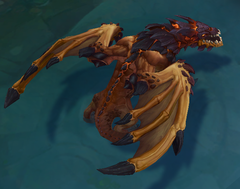 Le Baron Nashor is the most powerful neutral monster on the map. Killing him grants your team a buff that affects your stats as well as nearby allied minions. Your recall (back) is faster and you gain overall power. 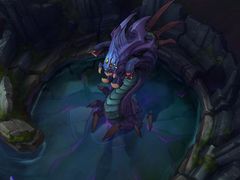 As said before, multiple buildings exist in the Rift. Some are used to protect your base and others grant a new type of minion when destroyed.

The outer turrets are the first objectives to destroy. They are used to defend the path to the Nexus. There are three exterior turrets per team (1 top, 1 mid and 1 bot). They attack piecemeal the first enemy in sight (minions or champions). However, if you attack an enemy under their tower, the tower will attack you. Turret hits get more and more powerful on a single target, so be careful when attacking an enemy below their tower! 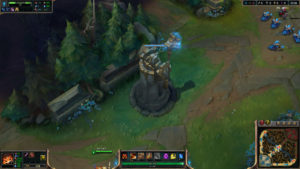 Once the outer turrets are destroyed, it is the turn of the inner towers to fall. However, these turrets have a progressive shield that protects them and allied champions nearby. There are 3 interior turrets per team. 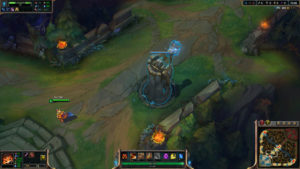 The inhibitor turrets protect the inhibitor (thanks for the obvious) which is a fundamental and ultra strategic building. These turrets attack with a laser beam that inflicts continuous and increasing damage to a target. The beam also gradually ignores the target champion's armor. 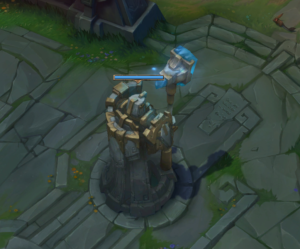 Inhibitors are structures that must be destroyed to reach the enemy Nexus. Once destroyed, your Nexus spawns super minions in the path of the destroyed Inhibitor. If all three Inhibitors on a team are destroyed, then two Super Minions will spawn per Minion Wave and per Lane. 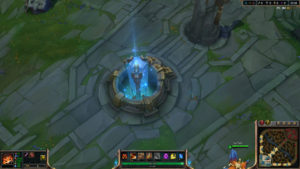 Nexus turrets protect your team's Nexus. They are invulnerable until at least one of the inhibitors is destroyed. The attacks of these turrets are the same as the inhibitor turrets. 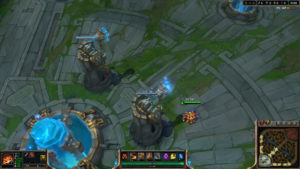 The Nexus is the main structure of the game. It is he who summons the minions who go on the different paths and who must be destroyed to win the game. The Nexus is invulnerable until the last two turrets are destroyed. Destroying the Nexus earns you 50 gold (which is important!). 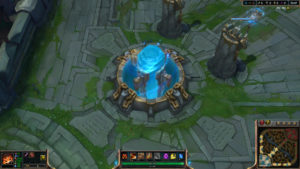