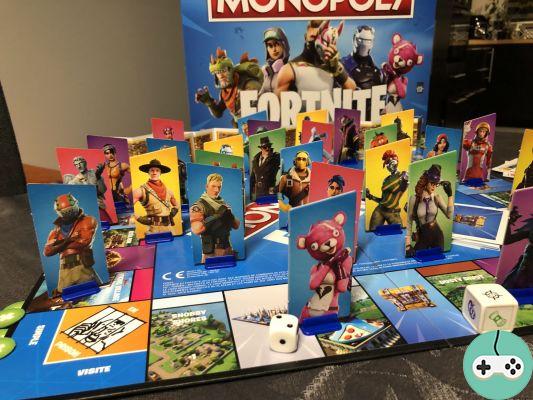 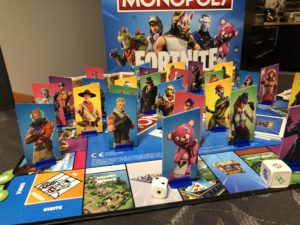 After the release of Monopoly Mario Kart (and so many adaptations already in existence), Hasbro is back in the gamer world: a new version of the legendary management game has been released, this time with rules adapted to the Fortnite shooter. My son and I went to test it:

The preparation of the board is quite long the first time, allow between fifteen and twenty minutes the time to cut the 27 cardboard costumes from the board, as well as the 110 life points tokens and the 8 walls to be folded. This goes faster for Storm, Chest and Location cards, which are already cut and simply wrapped in protective plastic film. Finally, you will have to use the stickers to put on one of the D6s with special action symbols.

For the next games, you can start in just a few minutes, even if you can expect a mess in the box, there is indeed no storage space ... 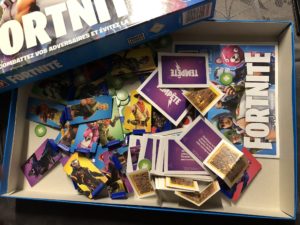 The Storm and Chest cards are positioned in the center of the game board, each player chooses a costume of their choice, then the cards for each Location are placed in front of the corresponding location. After distributing 15 life points to each player, the game begins. The players all roll the numbered die, the highest choosing where it starts, then the others in descending order. Thus, even if it is indicated roughly START on this beautiful box at the bottom, it is not used, the idea was to resume here the parachuting of the beginnings of matches so specific to the Battle Royale. 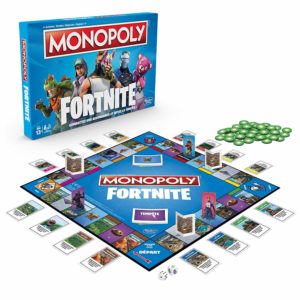 Each turn, the player rolls two six-sided dice. The first very classic D6 is the movement die which indicates where the player is going. Depending on the square, different events are triggered: gain or loss of life points, recovery of a location, draw a Chest card ... The second D6 represents special actions which can be of four different types: grenade (deals damage to all opponents), build a wall, shoot or bandage ...

The walls are particularly useful for annoying others to his advantage because they are placed on his trajectory (so if we rolled 1 on the dice, he can put himself on two squares) and force any player who passes then to stop on the box where the wall is placed. But they can also be life-saving as they block line of sight and therefore prevent a player with the ability to fire from aligning other players hidden behind.

Overall, the characters start out with a lot of hit points and the first few turns are pretty quiet. Locations don't cost anything, so they stack at no cost, and the bandage drops often enough to offset the small amount of damage taken on special spaces. In addition, if you have two Location cards of the same color, you regain two life points by stopping there.

Then, at each passage through the START space, a new Storm card is drawn, which causes its propagation: spaces are covered by the storm, which deactivates the linked action and inflicts damage on any player stopping on the case. Shots improve drastically, dropping to 4 hit points of damage, and combos with certain chests result in highs of 8 or 10 in one turn, leading to a brutal and unexpected death. When a player dies, his Chest cards are recoverable by others and all his Locations are invaded by the Storm. A good way to rush the end of the game to prevent it dragging on when a player is knocked out, but of course we haven't experienced two-player games.

As I already remarked after having tested the Mario Kart version, the game is fun in itself, but that we are far from the original rules of Monopoly! ... The greenbacks have disappeared, just like the hotels and the cards Community, erasing all the financial management aspect of the original. A bit like during a game in Battle Royale, the start is quite slow, especially with two players ... The life points do not go down so to speak on the first two or three turns of the board then everything suddenly accelerates and death arrives with a few throws of the dice without necessarily leaving any possibility of anticipating it! Finally, what could pass for a negative aspect would it not be born from a desire to offer gameplay quite similar to Fortnite?

An excellent gift anyway for all Fortnite players to put under the Christmas tree: