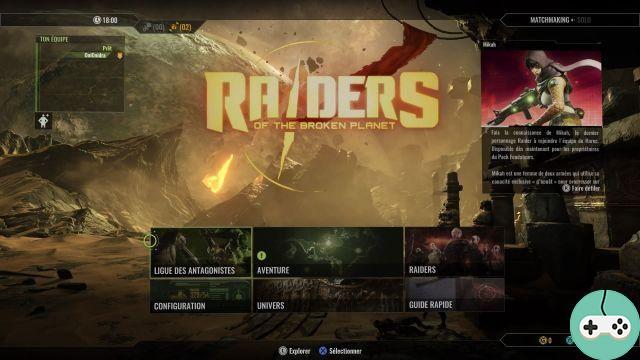 MercurySteam (known for Castlevania) released at the end of September its shooter entitled Raiders of the Broken Planet, a AAA-like title which is nevertheless carried by an independent studio. Thanks to a founder pack provided by the studio, I had the opportunity to test the title on PlayStation 4.

Unlike most shooting games where there is no real story, at least in game, Raiders of the Broken Planet integrates from the launch of the game many cutscenes presenting the history of the world and the characters playables called the Raiders. 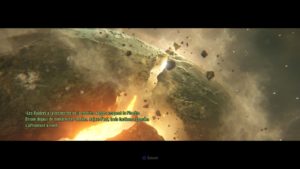 In addition, the in-game encyclopedia (under the title Universe) provides details. To summarize the events for you, we are in the future, humanity has spread across the galaxy thanks to a molecule called Aleph, allowing space to be distorted and interstellar distances covered instantly. Humans found the first molecules in the wreckage of a ship stranded on Titan (Saturn's moon), an emigrant ship from the only planet in the galaxy where this precious substance is found in the constellation La Lyre, 25 light years from Earth. A planet that has been shattered by the greed of its inhabitants in their mad search for the Aleph. Following this disaster, a surge of peace changed mentalities and the inhabitants of the Broken Planet decided to continue to live in their world as they could, in small respectful communities, except for a few bellicose rebels, who were banished. in space, the very ones one of whose ships ran aground on Titan. But the fragile balance of the Shattered Planet finds itself disrupted again with the arrival of the humans who bring the conflict back to these ravaged lands, seeking to plunder the Aleph in their quest to take control of the most important element of the world. 'Universe. A sort of reinvented Dune therefore.

Except that here we are not playing the humans, but the natives, the Raiders, who under the leadership of the enigmatic Harec will do everything possible to counter the human invasion against a background of forgotten myths, their civilization going back to ancient times. time immemorial going so far as to ask questions about the very origin of humanity.

Note that this Aleph is not just a background element linked to the story, it is at the very center of the gameplay because this substance generated by the planet does not only ensure interstellar travel, it also modifies the physiology of carbon-based organisms. This is how all Raiders are genetically modified and enhanced beings, glowing as soon as they are stressed or injured due to the Aleph they are saturated with, allowing the enemy to see their Footprint through them. walls. It is also thanks to the Aleph reservoirs that the Raiders are rebuilt and come back to life. 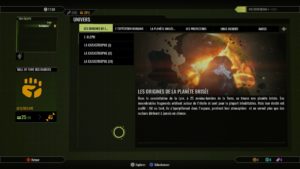 Elements still remain mysterious and will undoubtedly be revealed in the other campaigns. In any case, change is needed for some tabs and I haven't recovered enough to allow me to spend any on that! 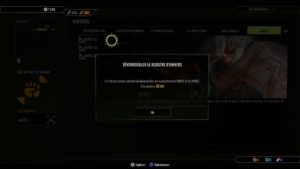 The content is organized by campaigns, the first of which, the Prologue containing two adventures (First Assault and Suspended on a Wire), is available in free-to-play on each of the platforms, offering the opportunity to test the game in all its features. without spending a single penny. 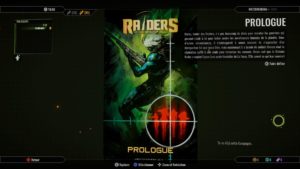 A second campaign is available now, Myths Alien, with four adventures. It is available à la carte (€ 9,99) or with the Founder's pack. 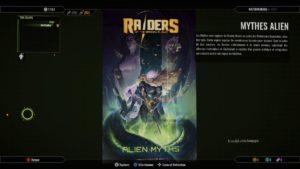 Three other campaigns are already planned, for the moment locked (contained in the Founder's pack). 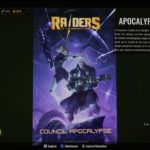 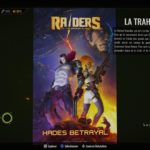 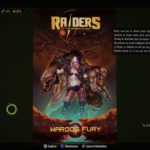 These adventures are playable solo or in teams of 4 players, on the side of the Raiders and its leader Harec, but also as an antagonist, with the humans led by Uras Beherit. For group adventures, or when you want to play an antagonist, automatic matchmaking connects players without friends to form groups. After a research phase (very short, no more than 1 to 2 minutes maximum for the first two missions, this increases slightly for the following ones), the four players of the future team meet in a lobby to choose the Raider to play.

By default, four characters are unlocked for free, Harec, Alicia, Hans and Konstantin, three more are added for owners of the Founder's pack: Mikah, Dr. Kuzmann and Ginebra. All other characters will either be unlocked by completing missions or purchased. 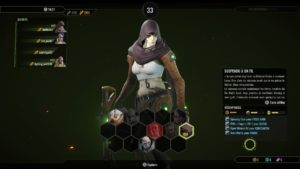 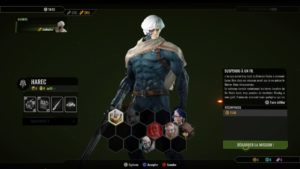 These characters can be personalized in terms of cards (special bonuses), weapons and appearances before the game from the dedicated interface, the combinations are saved under set titles, available from the lobby. Of course, to unlock all this, you need Gold obtained by winning missions (or be lucky at the end of the mission to collect it as loot). 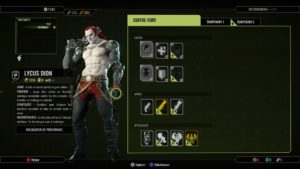 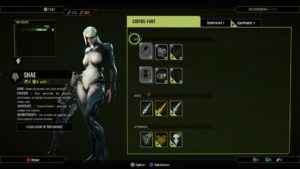 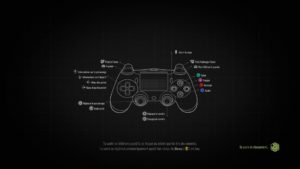 Once the character is chosen, the mission begins with large portions of cutscenes that can be skipped if party members agree. The objectives are varied: protect a target, shoot down an enemy, flee an area, overload generators, recover Aleph, reach an extraction point ... Shooting is important, of course, but weapons only need 'a limited amount of ammunition, not allowing you to saucer at all costs without thinking. Additionally, many weapons are not automatic, requiring firing and then reloading after each shot. Precision is essential! 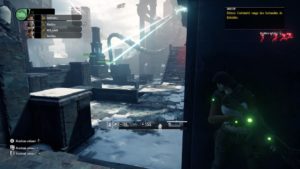 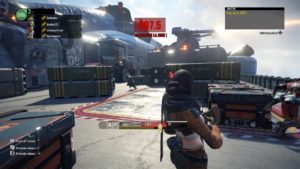 You have to constantly pay attention to your stress (displayed with the yellow bar in the middle of the screen) and use the blanket to let yourself be forgotten, while sprinting and dodging balls, while the bar is empty and possible injuries. heal themselves. Indicators are clearly displayed on the heads of enemies, allowing you to know their status with respect to nearby units: red is bad! They are just waiting for the best opportunity to take action. 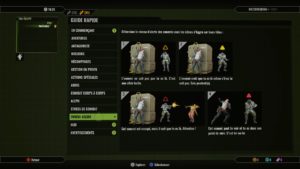 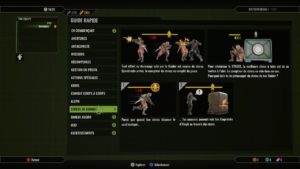 The clinch is not to be neglected even if it is quite technical, with blows to be struck, which can be dodged, and tackles, which can be stopped by blows. This is a bit complex to explain so I give you the tutorial graphic: 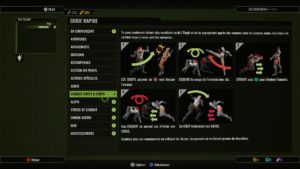 The number of lives is not unlimited and is shared between team members as the shuttle that brings the Raiders can only carry a defined amount of Aleph. Each death consumes a little and then, when the stock is empty, the shuttle must go back to refuel. During this period of scarcity, the team is then in a weak position for about a minute because there are no more possible respawns and it is failure if the whole group dies. 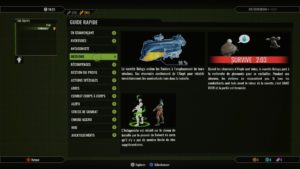 Depending on the game mode, the rewards are different. 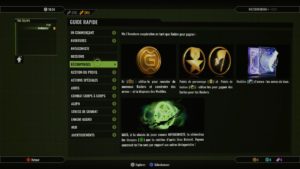 Unsurprisingly, the most interesting for character and account progression is playing with other players. The winnings are to be recovered at the end via a kind of lottery where each player chooses what he wants, then there is a fair sharing (I also had a case where a player was unlucky and didn't harvested nothing). 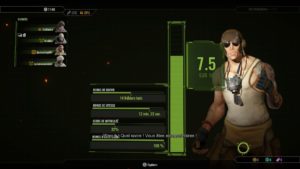 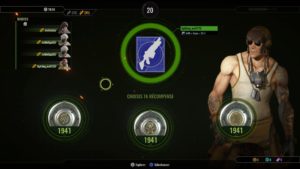 During the first tutorial mission with Harec, I was quite uncomfortable with a character that didn't suit me. In addition to suffering from his poor survival and single-round rifle, I was failing to properly utilize his special ability of teleporting into nooks and crannies and then using this often dominant position to gain the upper hand over enemies. Fortunately, Harec is only one Raider among others and I found my pleasure thereafter with Mikah, a Raider, better suited to my style of play, armed with an automatic rifle. She knows how to place a decoy on which she teleports at will (swapping positions, the last known position is replaced by a decoy while Mikah goes to where the decoy was), ensuring her undeniable survival in critical situations. (nothing beats the leak).

From a mixed first impression, I evolved into a much better second impression. The challenge is there, without being insurmountable, offering an interesting challenge to the good groups and a bitter failure to the bad ones. The management of lives by group, the very absence of a scoreboard or even the loot shared at the end, everything invites to play in cooperation for the common objective. It is very clear: it is useless to play solo, it does nothing at all. So yes, as always, there will be toxic or incompetent players, wild disconnections or absent, nevertheless the game seems to adapt on its own because, despite the fact that the games have regularly ended at 3, we do not didn't seem to be overwhelmed. 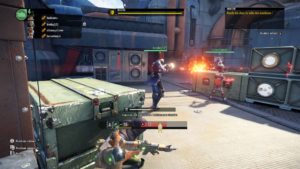 As a conclusion, I really think that if you like third-person team shooters and don't be afraid of a fair amount of action, you should definitely give the prologue a try and make up your own mind. It's free and all the features are there. Test Harec, but above all do not stop on him and test the others that you will have to discover the available game modes. There will always be time to invest if you hang in there, and do so with full knowledge of the facts!

Here are the links, so you won't even have to search:


Do you want to be up to date and know all the tricks for your video games? In gamesmanagers.com we enjoy playing as much as you do and for that reason we offer you the best tricks, secrets or tips for you to play non-stop. We offer you quality content and always updated to keep you up to date. That's why, in our website, you will find not only videogame guides but also tricks, secrets and thousands of tips so you can play to the limit. Are you ready to get it? Enter now and enjoy your videogame!
Wildstar - Architect: Rank Apprentice ❯

SWTOR - On the way to KOTFE: The Bounty Hunter