Various new features have been added for Alpha 2.2:

Your efforts to repair the Communication Relays in Crusader have not gone unnoticed by the company in charge of this region of space! Alpha 2.2 introduces the concept of "Watched" space into the game, which are areas of the system that are actively observed by Crusader Industries, Inc. These areas are centered around Cry-Astro, Port Olisar, and Relays. active communication. By disabling a Communication Relay, you can take the space around them in the area offline, allowing players to perform wrongdoing without being seen. But beware: disabling a Communication Relay is illegal and any player who attempts to do so will now be marked as criminal in this first iteration of the reputation / hostility system.

Destroying an empty ship, colliding with a docked ship (in guarded space), or disabling a Communication Relay now marks the character as a level 1 wanted criminal. Most serious crimes, including murder of a player or the destruction of an occupied ship (in the monitored space), will add additional levels. Each level adds an additional 30 seconds of time before a respawn. Want to lower your criminal level? Waiting ten minutes without committing an additional offense reduces the level by 1, or you can hack into a console located at Security Post Kareah.

The board at Crusader has an interest in keeping Communication Relays online and they are now offering bounties for those who help protect their space by taking down wanted level 5 criminals. When a level 5 criminal is detected, all players active on the server then have the option of hunting it, with a special reward for those who kill it. When a level 5 criminal is destroyed, they are kicked off the server and must reconnect. Players aren't the only ones fighting: Hackers and security forces now recognize and help their friends and foes, and both appear to protect their interests (hackers to turn off Communication Relays, security forces for keep active.)

I'm going to go out for some fresh air… ack… gasp…

In many games, the collision functions are based on a capsule-shaped mesh system around the character model. You fall against a wall, and your character stops because your capsule collides with the wall.

In Star Citizen, the collision mesh is detailed and takes a shape similar to that of the actual character's model which allows them to use their Rag-Doll technology to assign individual limbs to a collision with another object. If your character has an outstretched hand, the hand will meet the wall and act realistically. The extra-vehicular activity physics also allows the character model's animations to be more sensitive to what is going on and the environment around you.

A good example of this is when a character in extra-vehicular activity walks to a surface with their feet first. You will see the character's feet strike the surface and the knees curl over his chest, as if he is prepared for impact.

The overall result is a more organic and dynamic experience for the player, and a greater ability for CIG to use the extra-vehicular activity system as an element of active gameplay.

Stay cool with a cooler

Those who follow the development of Star Citizen closely should know that the technical design team will be reworking every component of a ship over the long term. With Alpha 2.2, they are happy to announce that the first of these components is now live and working as expected: the Ship Cooler! Coolers are used to dissipate active heat produced by other components, currently primarily the weapon system.

All ships include a generic cooler and they've also added two specialized units to the Voyager Direct store. The size 1 Wen / Endo Cassel and J-Span Cryo-Star are both available for purchase and rental. Please note that all players who signed up before the $ 56 million milestone will already have a Cryo-Star J-Span on their account! These coolers can currently be fitted to the Avenger, Aurora, Mustang, 300 series, Hornet, Gladiator, Gladius, M50 and P-52 Merlin. 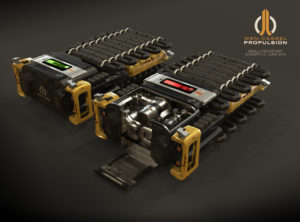 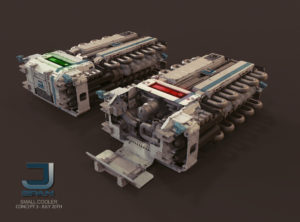 An important aspect of 2.2.0 is the start of their deployments to the new component system, they will be working towards that. As mentioned above, they added a new set of power generators and coolers to all existing ships, as well as 2 additional coolers to Voyager Direct to start offering more tuning options for each ship. The next big step is going to be a takeover of the shield generator components.

To prepare for this next step, they need to make some short-term changes to the way Shield Generators interact with ships. For 2.2, they will be locking down the shield generators installed on each ship. Avenger shields are locked for the Avengers, Mustang shields for Mustangs. In addition, the current Seal Corp shields offered for sale on Voyager Direct are temporarily disabled.

Now, since they have temporarily taken something away from the current owners of these Seal Corp shields, they also wanted to take this opportunity to let everyone know that these purchases will be converted into the new component system when the shield generators update. will be released. All in all, there will be a fairly clean exchange. These updated parts will be distributed once the full Shield Generator update hits live, and existing items will still remain available (and eligible for this conversion) on Voyager Direct.

Do you want to be up to date and know all the tricks for your video games? In gamesmanagers.com we enjoy playing as much as you do and for that reason we offer you the best tricks, secrets or tips for you to play non-stop. We offer you quality content and always updated to keep you up to date. That's why, in our website, you will find not only videogame guides but also tricks, secrets and thousands of tips so you can play to the limit. Are you ready to get it? Enter now and enjoy your videogame!
ESO - Design: Dyes and Guilds ❯

Heroes: a tool for talents