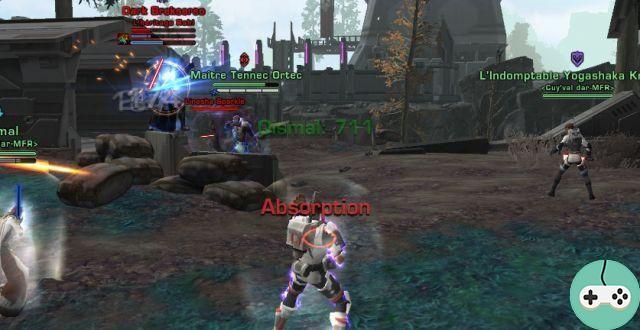 Rarax from the "Les Midichloriens" guild on the Mantle of The Force server, comes to us with this little guide, fun, to show us another way to play his class.

Have your comments to tell us what you think!

Hello everyone, I come here to make my small contribution to explain my vision of the dps commando in the artillery branch. It is in no way an assumption to be taken in word of the gospel. It's never my opinion. This first article will talk about PvP (PvE will follow).

Know, gentlemen of the commandos (and even those who wish to know this class better) that we are absolutely not mad dogs, capable of tartering about fifteen Siths for breakfast. No, we are not seasoned gunners advancing fiercely towards the enemy and galloping like wild ponies in the combat zone. We are not weasels either and the big cannon that we carry between our legs has absolutely nothing end.

Have you seen my cannon? !! Well, we are definitely not going to write poetry with it; that we agree !! On the other hand, having a style of play (gameplay) with a minimum of finesse will save you some setbacks, pvpistes or jcjistes friends.

I come to say that it is essential to assume its role of dps support. And I insist on the SUPPORT dps. It seems inconceivable to me to play a soldier by carrying in the hold of his ship, an oversized ego to explode all the kikimeters. No we should not be at the top of the bill, at the top of the rankings with 150 kills for 1 death.

Too often we see soldiers leaving the flower with the assault cannon, to go and defeat three imperials who keep a point. But nyeh! Maybe we shouldn't be too presumptuous. For me, as soon as we understand that we are not there to do 1Vs1 and that we are there to support others ... 50% of the work is already done. 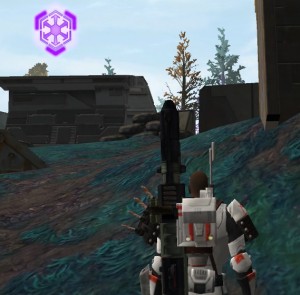 The style of play (gameplay)

I offer you a reflection, a little treacherous ploy that will surely be able to amuse your little crawling meninges! I specify that it works in 2Vs2 or 2Vs3. It is clear that two against 6 you will have trouble ... I would also like to point out that I play (and I strongly recommend it) with perforating cells: they are, for me, much better than plasma cells (in artillery ).

First of all, you have to find a hare, it's like in long distance races in track and field. A small sentry will do just fine. Once that hare is found and followed, you need to stay at the correct distance. ("Yeah yeah, my cryo-grenade has a range of 10m instead of 30 before, it changes all my gameplay!" FALSE! Cf. Norman)

Play with the decor. Hide, be fine in your approach. Stuff and run like an acorn, in the open, we know how it's going to end: in a soldier's tortilla with chili sauce! El Gringo, with his lightsaber and power leap, is already brewing coffee! Be careful !

So, let's resume ... Only Rambo can land in a war zone, in the open, and break the 7th Viêt-Cong company which is in front of him, so you have to try to approach your target effectively. If possible, always keep your hare on view. It will ensure you a diversion of choice for your movements in all discretion. 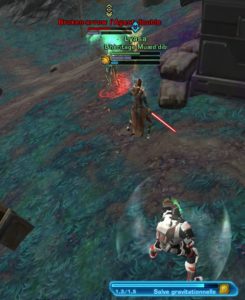 Until then we think we have done the hard part, WRONG! Some would say that hitting the heap, doing mass area damage (because the mortar burst puts you in first place at the kikimeter ...) and swinging gravitational burst all the way, that's all that matters . So I invite all the commandos to push the "p" button on their keyboard (but no, do not do it now, noodles!) To look at the powers of their class.

Back to our budding Roger Rabbit! We will call him Jean du lièvre, for more convenience! Jean du Lièvre is therefore in a very bad position since he becomes root, cc, chain snare and others ... Suffice to say that Jean du Hièvre is preparing to eat dandelions by the root.

But no ! Because jean michel commando arrives with his box out's! The diversion worked. We successively slam techno manipulation and cell economy to send it a first big probe, instant and free. I recommend slamming just behind a field aid to remove all state damage from Jean du Lièvre and end up with a second probe (the small one) which will be instantaneous and will cost 2 amos.

If Jean du Lièvre is doing quite well, he is at 50% and starts slamming def to feign tanking while waiting for reinforcements. There you start to hit the nail on the head. Again, as much dps the same as the sentry ...

Obviously, what had to happen happened: you get spotted. This happens very often from the moment you heal the sentry. No panic, gentlemen. We think back to the squeakers of the official forum who talked about their cryo-grenade, you just have to use it wisely. And that's probably why Bioware nerfs the distant stuns. We use these things all over the place without any real thought. There is a need to slam those stuns (for us remote ones) in a much more efficient way.

If you are a pianist or have ET fingers, this is for you!
-> Try to throw your cryo on a player other than the one you are dps. At best, a player who has already been stunned and has just slammed his destun. There it is effective! There ok, there we discuss!

In short, you have to juggle your powers with the greatest dexterity! Do simple silly and mean dps ... Yes, but not all the time!

The advantage of this kind of strategy is to force the others to announce an incoming on a point. If all goes well, you haven't been spotted and the inc is biased. At worst two attackers rush on the sentry and balance their burst to kill it as quickly as possible. If you come back like a flower, you won't be able to heal her and won't have time to slam the ground aid. This time that you will gain on the fight has a twofold interest. And yes, in this case, making the fight last is an asset!

Beyond the time that you will gain by making the fight last, you will also have the possibility of making effective teamplay. A sentry and a commando on an opponent, as a rule, it will be very difficult to get out, even with a healer. You will therefore do this fight in two phases, one in healer support, the other in dps support. Juggling with its two specs will allow you to save your sidekick from certain death.
Obviously, if the two opponents focus on you ... Slam your CDs, your cryo-grenade, your instant powers. All you have to do is pray that Jean du Lièvre will know how to play correctly by saving your asses. 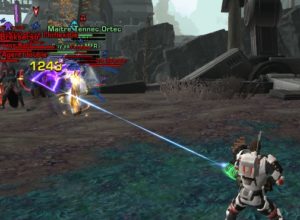 Far be it from me to say "Go Hybrid people, c tro kikoo you will see you!"
On the contrary. Making a hybrid template for a soldier is clearly nonsense to me when playing artillery ... If we don't go looking for the demolition salvo I don't see the point in playing the artillery spec.
On the other hand, it is advisable to modify your tree a little when you go in pvp. In my opinion, it is not necessary to go for the 4% alacrity of the Assault specialization. As long as I think the healing support is short term, interesting to use, I recommend going for the “first contact” buff in war medicine instead.

DO NOT COMBINE BOTH!
-> A big boost of alacrity, it's great fun, but your ammunition won't like it! You will cast much faster (between 0.1 and 0.3 seconds on the gravitational burst) but lose your ammunition in proportion to your time saving ... it is not profitable.
On the other hand, and I insist, IN MY OBSERVATION, it is better to go and recover this improvement of 5% alacrity rather than the 4% of the assault branch. 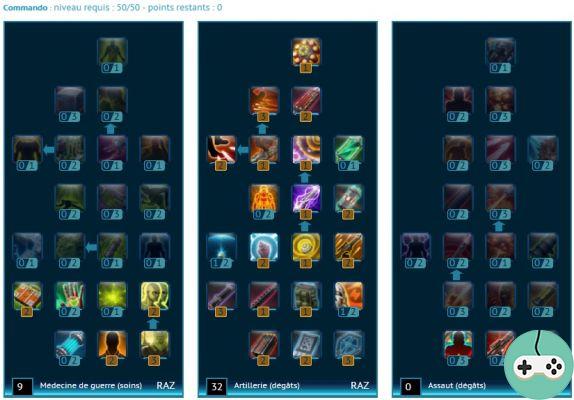 It is very debatable but it is the one that I use in pvp and I assure you that smoothed over several tens of BG, it is rather not bad.
Maybe I'll come back who knows ...

I recommend none for opening! In pvp, the opening cycles are (more or less) to be banned: of course you have to dps a maximum, of course that you have to kill those opposite to take the point, of course that makes your kiki stand up to do 10 kills in 2 minutes ... Please understand that it is better to go to Star Wars: Battlefront or Counter strike if you want to kill. SWTOR is not an FPS and getting kills has never been a goal in BG.

As for dps in PVP, you have to adapt ... If you are relatively stealthy, you will be able to slam your gravitational bursts and put your debuffs correctly. The problem is, your commando has more string to its bow.

We realize that the soldiers are very often focused for reasons of rather weak survival. Indeed, our defensive powers are not very effective, our heavy armor is not yet very significant (in my opinion) and our mobility reduced to nothing make us rather attractive prey ... As a result, it is important to don't lose sight of your teamplay goals!

If this happens to you (and it is certain that you will face this problem), stay focused on your common target. It is IMPERATIVE not to scatter. How many times do we see people who think they can let go of the sauce without being spotted. In the end, as soon as they get cut it turns into: "OH MY GOD ... BUT WHAT ARE WE GOING TO DO !!!!" circling around their assailant before inevitably being unsoldered.

Well ... in these cases there is only one thing to do, warn the sentry of the danger while slamming a cryo-grenade if the reload time is ok. We continue to focus on the same and let ourselves be shot! Well yeah that sounds weird but anyway, if you have to kill someone quickly, the one you've been beating up for 20 seconds is bound to be in worse shape than your attacker. So, DO NOT CHANGE TARGETS! Either target 1 is really in distress and in this case, the sentry passes towards your attacker so that you can finish your first target and it is only AFTER that we pass on the attacker ...

It's up to you to manage your survival with medipacs, reactive shields, tenacity, meditation, etc ...

I think I'm done with this first part of my vision of the artillery commando. I will continue this weekend with his PVE inclination.

Thank you for your comments and appreciations so as to make together, advance our knowledge of this class, too little popular.