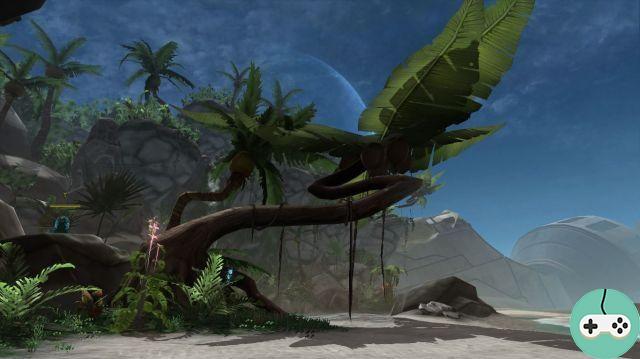 I am not a reference as a player, but after reading the guide to a successful operation, I noticed that a guide for ZL (Litigation Zone) could be interesting. It is not the ultimate guild but it could avoid what I see too often at the moment, namely:

A low-level Flashpoint is undoubtedly a good way to get some equipment, to practice the mechanics of future operations, and finally to forge new friendships… If and only if everyone puts their money into it! 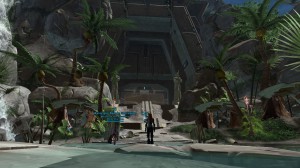 Let's start with the different protagonists

It's cartoonish, but it's pretty much the specimens one can stumble upon in a group search. Some mix several genres, such as the example of the crook ...

Start a ZL in group search

1 - Getting into the group queue in our role. Some classes have 2 potential roles. It doesn't mean we can tick both. If you check tank without the right equipment and without the required skills, death is guaranteed!

2 - When we are looking, this implies that we are available. Too often it happens that when the group is created, we wait for the maximum two minutes to validate it because a player is AFK (Away From Keyboard: therefore absent) or other. It's unpleasant and the group does not start off on a good basis. We must remove ourselves from the list if we are no longer available.

3 - The group is formed we arrive in the area: "Say hello to the gentleman". Basic rule of politeness is a minimum. But that's not all ! The noob can manifest itself by indicating that it does not know the area. He will thus be able to obtain some explanations. In addition, this is where the way to do the ZL is decided. Rush, semi rush or the total. The rush is to complete the area as quickly as possible, even avoiding certain bosses. The semi-rush is to avoid the packs and only do the bosses. And finally, the total includes bosses and bonus objectives. Everyone has to agree from the start, it avoids disappointment. 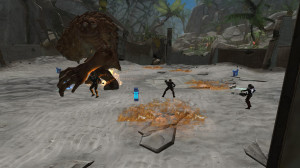 For each group, there is a tank (the one that takes damage), two DPS (Damage Per Second: the one that does damage), and a healer (heal). It is essential that everyone respect their role to avoid the death of the group: it is by wanting to take shortcuts without thinking that we lose time in the end.

He must be the object of all the attentions… of the enemy.

From level 16, he receives an essential skill: taunt (provocation), which will be very useful for him to keep the boss or the elite of the pack on him. From level 30, he will also inherit the zone provocation which will allow him to attract the toughest packs and save the rest of the group.

It is the tank and only the tank which pulls, that is to say engages the fight, because the motto is "who pull tank" (from the verb tanker if, if), and who tank without equipment dies! In addition, most of the time, overtaking the tank means aggro mobs, so pulls ...

He heals in priority.

And then if need be, or if he has the chance, he can do a bit of damage. It focuses mainly on the tank which, if it plays its role well, will take all or almost all damage. The good healer keeps the tank's life bar fairly full and does not wait until it is at 15% of its health bar to cast his big healing spell which takes 3 minutes to arrive ... because the tank will die, will pay repairs that could have been avoided and the rest of the group is likely to follow him anyway.

He hit. Yes, but not just any old way.

On a mob pack, the weak must fall first while the tank keeps the stronger on it. Once all the "little ones" on the ground, the DPS will be able to attack the strongest. The advantage is also that the tank will have had time to piss off the mob, which will avoid the slaps lost through the muzzle of the DPS, due to unstable aggro.

On a double boss (or double elite, for example 2 turrets), the DPS focuses on the one the tank targets, see the possibilities of slaps lost otherwise.

What if there is only one mob? So taiyooooo! All on the same! 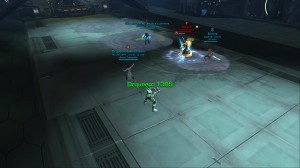 To facilitate combat and allow the development of strategies, some classes have CC (or stun). That is to say a spell that makes the mob inactive for 60 seconds. However, control stops if the mob receives any direct or indirect damage (DD: Direct Damage / DoT: Damage over Time).

Those with CC available will mark their target with a nice visual effect (lightning bolt, nut, saber, blaster, shield) but will refrain from marking it with the target indicating more focus from the DPS. Specify in advance which symbol you are using and keep the same throughout the area.

If there is CC, it is therefore FORBIDDEN to do area spells (AOE: Area of ​​Effect), such as: grenade, mortar, sweep, and the like ...

Again, some classes have a spell that repels enemies (bump). Sometimes useful to send a mob flying 10 floors below.

HOWEVER, the bump is often to be avoided! Why ? It scatters the mobs, which makes combat management difficult both for the tank (anyone who has ever done this role will tell you) and for the CAC (Close Combat) DPS who have to chase after the mobs, delaying their defeat. . In addition, it wakes up stunned mobs ... And besides, very often, it makes enemies bugger if you make them fall into the void, wasting more time than saving.

What if you're the healer, focused by a mob? Warn the tank, it's his job, he'll save you the worst. But there, I hear the scholars and other wizards waving: "Yes, but we, in our skill tree, we took the bump option which heals! So it's useful." WRONG!
Considering the little care that it brings in comparison to the mess that it puts, and without counting that you risk to take again the aggro of certain mobs, it is to be avoided !!! Moreover, note that in the operations that you will do, your RL (Raid Leader) will yell at you if you use it (abuse it) ... yes yes it smells of lived experience! 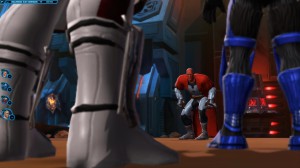 Delicate point, it must be said ... I will only speak of the loot (we also say loot) of the bosses, that is to say the objects recovered from the big bad guys. Three possibilities when there is an interesting object:

The order of obtaining is first need, then greed / disassembly. If 2 or more players need it it will be given randomly based on a virtual dice roll.

Which option to choose among the 3? There is a rule: we only need on an object intended for its current class and which we really need (if the object is of our class but does not improve us, why take it of authority?). For all the other choices, that is to say for our partner, to sell, or to look pretty, it's greed! Otherwise you become a ninja, in this case, a loot thief. And that, gentlemen, ladies, is not good at all!

What happens if my finger rips on the wrong choice? For the subscribers or the privileged, nothing could be simpler, you can swap the object with the one who needed it for 2 hours. What about free-to-play people who are wrong? You can't go back, so you fall into the category of villainous, ugly, not nice ninjas. 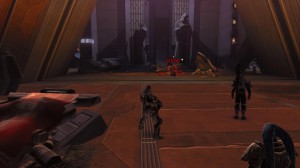 To defeat the toughest villains, it is essential to follow a strategy. If anyone in the group explains it, follow it closely, especially if you are a beginner. Sometimes, finding out beforehand by reading specialized subjects on the net (and of course on this site) will also be interesting.

But above all, don't do what you want!

In conclusion, what to remember?

Do to others what you would like to be done to you. Don't be the ninja, pay attention to the directions of the right player, don't just type haphazardly, and then you will have a great time of fun crowned, in some cases, with 1 or 2 well-deserved pieces of equipment.

Cakeraider on Battle Meditation (just so you know who writes; p)

Call of Cthulhu - The Isle of Fear ❯

SWTOR - Denova Nightmare: Kephess and others