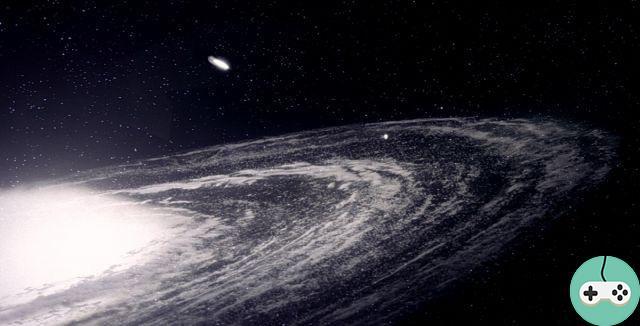 The galaxy where the Star Wars adventures take place is estimated at 120 light years (one light year is equivalent to the distance traveled by light in an earth year, i.e. 000 billion km), or in local distances 9 parsecs ( 461 parsec = 37 light years). It counts in the 000 billion stars, and of these systems only less than half are considered habitable. It's big, hard to think that we know all the planets. Moreover, we regularly have proof that this is not the case. Explorers always find new worlds on the borders of known space. And regions already perfectly mapped sometimes arise political groupings of several planets capable of undermining the immense Galactic Republic. The latest to have manifested in this way is none other than the Sith Empire of Darth Vitiate and his Dark Council. The cartographers of the Republic have classified all these sectors into 1 large distinct regions, plus two more to designate unexplored areas. 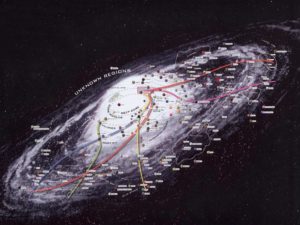 Deep Core: At the center of the galaxy is a black hole, which disrupts all surrounding systems. The roads nearby are unreliable, and are even known to collapse regularly. Other black holes have been triggered there, and star clusters make transportation even more difficult. The inhabited worlds there are therefore mostly city-planets which have little developed space transport. Yet others have joined the Republic. On the edge, where the roads are the most stable, but not only. Deeper, let us cite the example of Tython.

Galactic Core: Coruscant is considered the closest world to the Deep Core with the most stable access. It is also the heart of the Galactic Republic, its capital, the world from which it developed. The main worlds of the Galactic Core, or Core as it is commonly known, are founding members and / or key worlds politically and economically. As Alderande, Corellia or even Kuat Guarana. 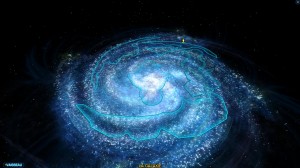 Colonies : When Republican explorers left the Core, the area of ​​the first worlds visited became known as the Colonies. These worlds have for the most part been considered as sources of resources rather than for settlements of people. There are therefore many industrial centers like Balmora.

Inner border: Long called simply the Rim, when galactic exploration stopped for a few centuries, this region was managed in a very different way than the Colonies. Here, those who came to settle did so with the intention of creating new lives. It is especially at the level of mentalities that we change. Here disappears the "Core-centrist" mentality for more savage and separatist creations. It is also here that the first pirate centers begin, neighboring other cultural centers and some alien planets such as Manaan.

Zone d'Expansion : Believing to have reached its maximum, the Republic saw fit to let go of the next planets discovered. A serious mistake, the plundering of resources has been systematic. And when the rampage was finally seen, it was too late. The Republic has taken note of not giving them so much freedom, but these scars will take a long time to heal. Today, this region is no more than a transition zone. 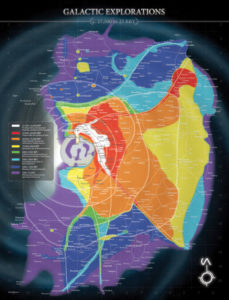 Median border: With its large, little explored areas, the Median Rim suffers from too little colonization and little exploited primary resources. People in this border area often have to work hard to survive. But it also makes them more effective, as on Word Mantle. Belsavis, the Republic's prison planet, is also at the edge of the region.

Outer border: The largest and most diverse of the galactic regions, so large that galactic powers that are enemies of the Republic can settle there. This is where the Empire Headquarters worlds are located (Korriban, Dromund Cheese, Yavin IV, Ziost...), the Mandalorian worlds, those of the Hutt Space (Nal Hutta, Nar Shaddaa, Quesh...) and its neighbors Voss et Makeb or theTion's hegemony. If you want to hide, you can easily find half-colonized worlds like Tatooine or pirate nests like Rishi ou Hoth. But we can also find worlds that want to be equal to those of the Core, as was Taris before its destruction three centuries ago. Even within the Republic, the worlds of the Outer Rim have already clashed with those of the Core.

Brass de Tingel: After the sacking of the Zone d'Expansion, new territories had to be granted to large companies and corporations. They were installed in a region located at the end of the Hydienne Commercial Way. On the other hand, it was out of the question to leave them so much leeway and a certain supervision remained in place. During the war that saw the return of the Empire, Sith troops waged their first campaign here, cutting off residents of their motherhouse from the Core. 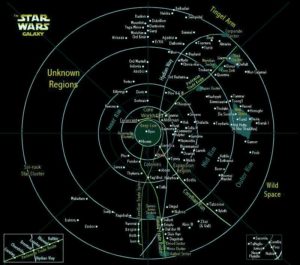 Wild Territories: On the other side of the Outer Rim are always other worlds, other territories to explore. Some are known, the ends of the trade routes allow to continue to advance in their direction. It would still be necessary to have the time and resources to devote to it. These worlds are not much different from those on the Outer Rim. But because they are beyond that, for Core decision-makers they are bound to be wild.

Unknown Regions: It's hard to believe, but a whole quarter of the galaxy has not been explored. There is no trade route that goes in this direction, unlike the Wild Territories. From the Deep Core to the equivalent of an Outer Rim, there is nothing that does not allow building a forward base. However, there are contacts with these areas. We know that the chiss originate from there. We know how to go to Illum ou Lehon/Rakata Prime. But there is no real will to learn more in this direction.

Add a comment from SWTOR - Geography of the Galaxy