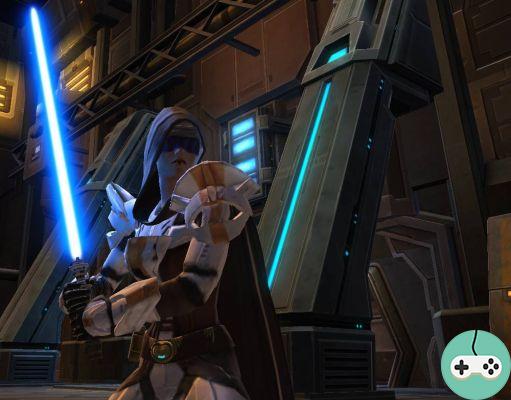 Hello. First off, a quick introduction, I'm Enkimy, aka Imeryhlian, Jedi Guardian 50 on Kessel Run and, as of this writing, 27 on Battle Meditation. I'm not part of any major guild, just guilds with friends, but I still have the annoying habit of optimizing my character to the maximum. Some would say it's not a bad thing, but it sometimes leads to nice nicknames like "Korean" or "database".

Today, I'm going to tell you about the Jedi Guardian, the bulwark of the Jedi Order against the Empire. 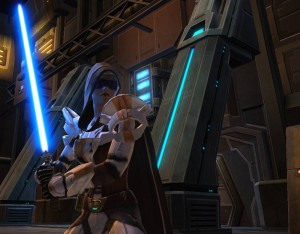 A true bulwark between the good people of the Republic and their enemies, the Guardian resists when all seems lost and challenges his opponents to attack. His perfect focus and mastery of the Force allow him to move easily even in his heavy armor, making the Guardian a difficult target to take down. Leaders on and off the battlefield, Guardians are known to encourage their allies to give the best of themselves, making them invaluable in any conflict.

The two most effective companions for my taste are Kira (a good melee DPS that can eventually offtank) until you get Doc. Doc is outright the ideal companion, and once in his possession, you will ride on most mobs, elites or not. 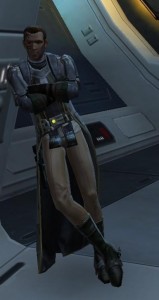 Whether in the leveling phase or to play in a group, the tank and DPS branches are just as viable as the other. However, if you are looking to do most instances, a tank will always be more appreciated than a melee DPS, although Jedi Guardian DPS can serve as an offtank very well. 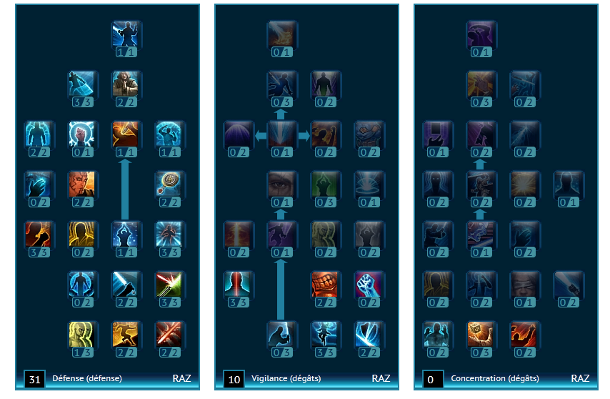 Tier 1
Victorious Flood: A spell to spam, not only does it reduce the target's armor, but also gives you points of focus, not to mention the stack with the Protective Slit.
Dust Storm: -5% accuracy on all targets within range, need to be clarified that this is excellent?
Momentum: a skill that might seem essential ... During leveling, putting three points in it is not superfluous, but remember that in a group, you hardly have time to place more than one Jump. Strength.

Tier 2
Protective stance: 6% defense. You are there to cash, so cash!
Surprise: With Blade Barricade at Tier 3, Counterattack becomes one of your main defensive CDs.

Tier 3
Blade Barricade: Each retaliation will increase your defenses. Believe me, your healers (or Doc) will love you for it.
Guardian call: The red button in the event of a large loss of life or imminent damage.
Pacification: The main difficulty in Guardian is multi-target, this talent increases the damage of our 2 AoE.

Tier 4
Shield specialization: Do we still need to specify ...?
Courage: or the art of being able to place an AoE or a Blade Storm for 0 Focus.

Tier 5
Stasis Mastery: Allows not only to put a target on stand-by for three seconds, but in addition to generate points of concentration by inflicting damage and continuing to strike.
Extreme strike: the Swiss knife spell: heavy damage, a stun and a taunt.
Blade Barrier: The Guardian's best defensive cooldown!

Tier 6
Inner Peace: You have to take it, this talent makes you cash.
Cyclonic Bursts: Increases focus generation, giving you the ability to spam. On the other hand, we use very little the two slots once arrived at this level ...

Tier 1
Reinforced Winds: Increases the damage of one of our two AoEs and reduces its cooldown.
Improved Fatal Strike: The synergy with Victorious Storm and Protective Slash seems pretty clear to me

Tier 2
Accuracy: Increases accuracy by 3%. It doesn't seem like much, but these are statistics to be had in less on his equipment!
Perseverance: Stamina is your 2nd main statistic.

A good DPS talent tree looks to me like this: 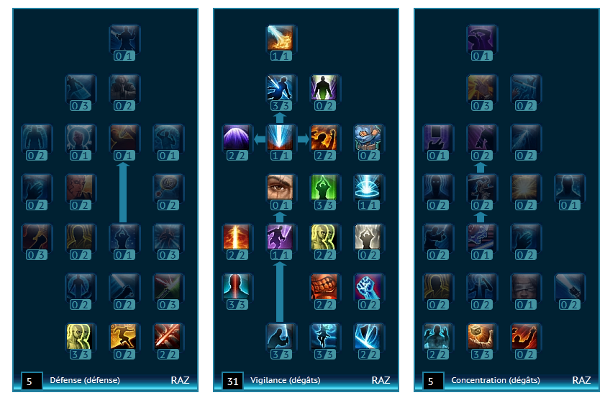 However, I cannot detail the specialization (not having played it), and I will read your comments carefully for a possible revision of the article!

If by any chance you want to get started in the trades (which I can only recommend), the different options available to you are as follows:

Whatever your choice in the end, I strongly advise you to mount it as soon as you get your second companion, especially with regard to the second so-called "mission" harvest.

Unlike other MMORPGs, SWTOR allows non-DPS classes to do more than well thanks to companions. I went up to level 50 only in tank specialization, I never had a problem finding a group, and never encountered the slightest problem in advancing in the class or planet quests.

Keep only that in mind: you are the tin can, make sure that your companions, players and NPCs, do not die, and you can overcome all difficulties!

May the force be with you.


Do you want to be up to date and know all the tricks for your video games? In gamesmanagers.com we enjoy playing as much as you do and for that reason we offer you the best tricks, secrets or tips for you to play non-stop. We offer you quality content and always updated to keep you up to date. That's why, in our website, you will find not only videogame guides but also tricks, secrets and thousands of tips so you can play to the limit. Are you ready to get it? Enter now and enjoy your videogame!
SWTOR - Commando Artillery ❯