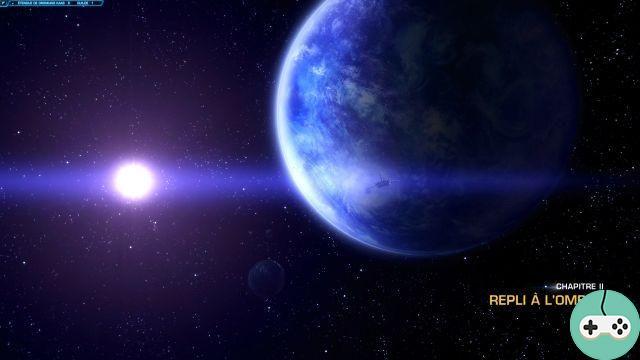 Responding to Empress Acina's invitation, we travel to Dromund Kaas. Theron and Lana are with us. Lorman, minister and former captain who failed in a clash with Theron, welcomes us willy-nilly. He guides us to Acina. She then quickly invites us to chat away from prying eyes, in her personal vessel. 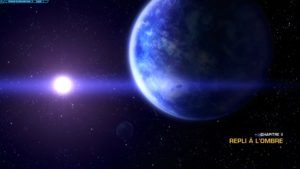 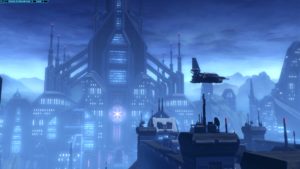 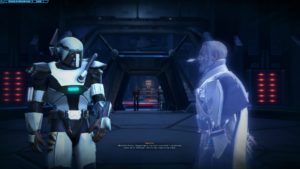 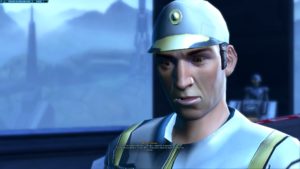 We learn that there are opponents of the alliance she wishes to conclude. Acina is lucid about the forces that clash in distant galaxies and knows that she will never defeat Vaylin, however she thinks she brings us the necessary help for this. Unfortunately, his ship suffered damage and we narrowly escaped by jumping into the jungle of Dromund Kaas. 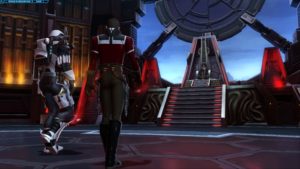 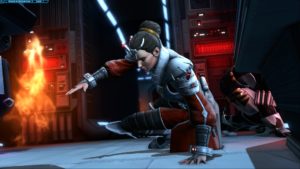 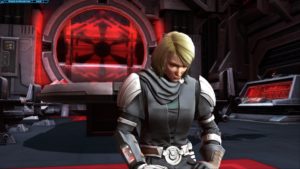 Our first opponent is a vine cat. This creature does great damage. We start with the accompanying strong level monster. The latter does nothing in particular except that it also types relatively consistently. After eliminating it, let's go back to the cat before killing the two little ones that appear under 40% to 30%. The cat also jumps regularly to move away, no need to follow it, it will come back on its own. 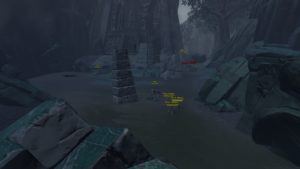 Acina having helped us as a partner, she seems to enjoy the fight and boasts of her piloting abilities, when the shuttle is not sabotaged. We think Lorman may have done it, but Acina denies it, she firmly believes he can't. Meanwhile, said Lorman tells Lana and Theron that our shuttle has crashed and has probably been disintegrated. We then resume our journey in the jungle of Dromund Kaas. 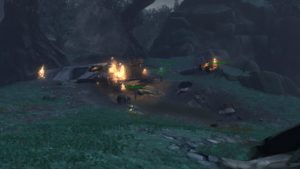 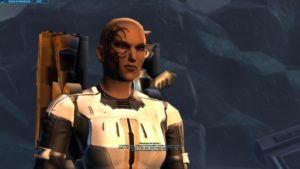 Arrived near the shuttle, we spot GenoHaradan assassin droids. The clash is with three droids, two normal and a weak, as well as a leader of the scouts, elite in his category. Normals can be controlled to reduce damage. A knockout missile will do the trick before quickly passing over the weak droid and then interrupting the “assassination” ability of the second normal droid. Other probe droids may appear during combat. Eliminate them in priority to save the healing partner.

As a storm is brewing and we head for the GenoHaradan camp, Theron is contacted by the former Chancellor of the Republic. She wants to offer us an alliance, but Theron refuses. So we continue on our way and attack the GenoHaradan droids on the way. This allows us to acquire three navigation coordinates to identify the base camp we are looking for shelter. In passing, we take the opportunity to reprogram the nearby turrets as a lightning rod, then we go to the GenoHaradan camp. 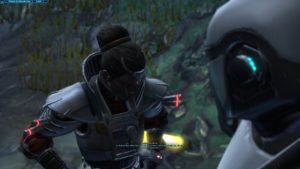 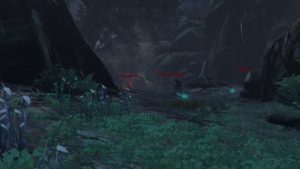 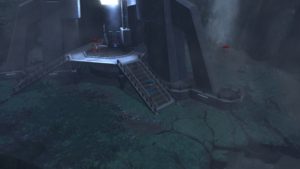 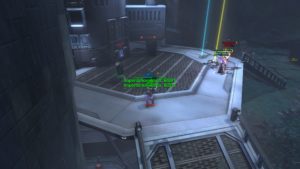 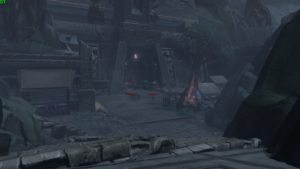 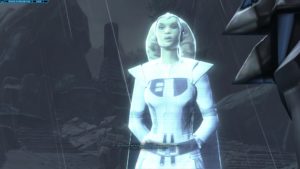 In doing so, far from worrying about being discreet, we eliminate all the droids present. Fortunately, the storm erased our tracks and hampered the research of the other GenoHaradan. However, this is not enough and we are forced to lock ourselves in an old Sith temple to escape their patrol. 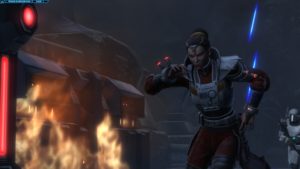 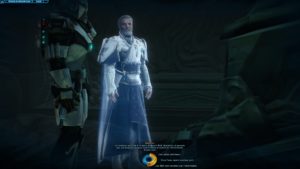 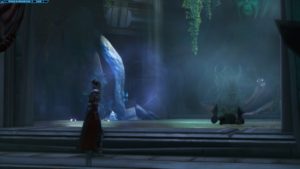 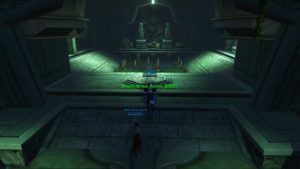 Acina thinks there is another way out. We are therefore advancing into the desecrated tomb, when Valkorion intervenes again and reveals to us that he was wrong to think of finding the secret of immortality in them. For him, Dromund Kaas is lost, because the Sith would be too corrupt. Being an emperor was not enough for him and he shaped Zakuul, whose flaws he does not see. But that does not help us and we must advance towards our new adversary: ​​a "Horror of Grave", which we can dodge by shaving the wall. We discover that many traps are activated as we pass. Flamethrowers emerge from the walls as well as incapacitating traps. 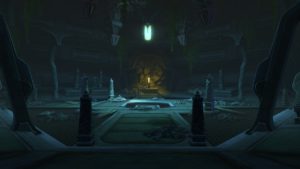 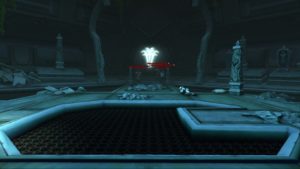 We then arrive in a room where two hunters and a GenoHaradan leader welcome us. One of the fighters can be controlled by a knockout missile, reducing damage taken, and that's no luxury considering what each of those three enemies inflicts. The leader jumps to the center of the room and casts destructive abilities on a loop. You can interrupt it by hiding behind a set, but be careful that the partner does not resume aggro. Its ability to interrupt absolutely is the ultimate shot (do not reflect it until you have killed the two hunters). If the boss finishes his channeling, you won't last long as he deals 600k damage. Finishing the first hunter then the leader is thus possible. While remembering to control the second hunter again, as soon as necessary to relieve the healer partner. On top of that, the adds will lay down a green dot like a sorcerer's affliction that needs to be dispelled as quickly as possible.

In the absence of long-lasting control, starting with a moment of inheritance to kill one, if not both, hunter (s) very quickly is another viable solution. Other abilities may hinder combat. The mine throwing is the one that places several areas of flame damage on the ground. Get out quickly and pray that the partner is not inside. There won't be time for him to get out if the first one appears on him. On the other hand for the following ones, it is absolutely necessary that it has been deactivated in order not to remain in the following ones. In case you haven't guessed it, this is the time to use the unit, as its 50% damage reduction won't be as useful as when your partner isn't healing you. A melee class could also be advantageous in this combat given the number of pipes and the greater possibilities of interruptions of these classes. As well as the number of defensive CDs they have.

Finally, ironically, the sequence of his spells is not predetermined. The ultimate fire appears quickly, but sometimes it is preceded by many others while the missile rain is the only predictable one since it arrives at approximately 75% of the points of health of the leader then a little further under 25%.

In short, there are two strategies, keep one hunter under control and kill the leader second or start with both hunters. We have chosen the latter solution, which seems more appropriate, since it does not require a particular class. And if you're having trouble holding on, consider leveling Acina up from level 45 to 50 with partner gifts (120-150 cultural artifacts will suffice). 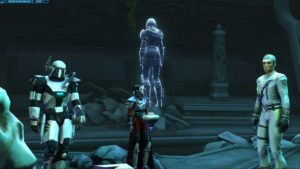 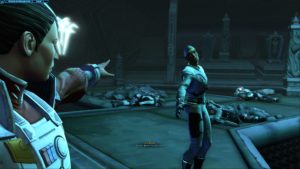 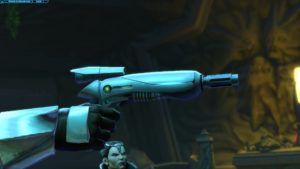 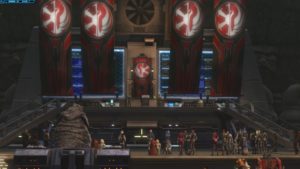 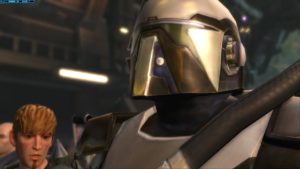 Once this difficulty is eliminated, we take care of Lorman. Desperate, the latter tries one last time to manipulate us by pretending to have prisoners, but Lana and Theron were too strong for the Imperial troops. We execute it and return to Odessen where the former Governor Saresh tries to convince our troops of our death. Our arrival ends the debate and we eliminate this corrupt bureaucrat. Acina recontacts us and we accept her alliance, having nothing to reproach her since she is not the instigator of this plot.

Add a comment from SWTOR - KOTET in master mode # 2