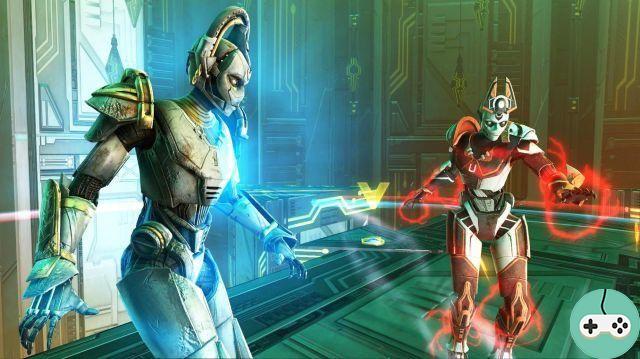 After taking out the pretentious Tyth, you can set off on the assault of a second Operation Boss. This one is made up of the twin droids: Aveila and Esne. They show up in a diamond-shaped room that you'd better not go out of if you don't want to fall into the void.

Having two units to tank may give the impression that a swap mechanic will be necessary, but this is not the case in story mode. The presence of two tanks is still recommended to distribute the damage although it is not mandatory. The principle will be that each member gets a polarity module that will give you two passives (positive and negative) and change from one to the other to reduce the damage suffered. The rest of the phases simply boil down to lowering the bosses to their respective limits each time and adding a few additional abilities. 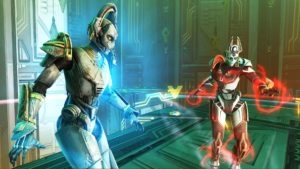 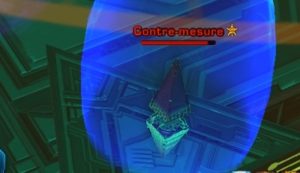 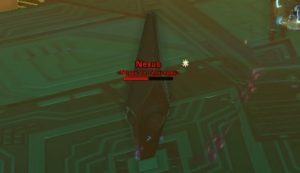 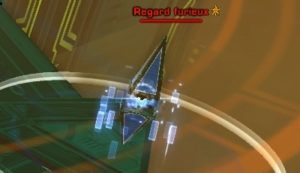 The fight takes place in 4 phases.

This phase is a preparation phase. Aveila and Esne aren't here yet and you'll have to kill the Codices for each party member to collect a Polarity Module. After which it will focus the nexus and drop it to 50% of its health points to launch phase 2. It sometimes channels a charge of fire that should not be placed under the feet of your comrades.

Phase two begins with the arrival of Aveila and Esne. Each tank will have to take care of one of the two droids so as not to multiply the damage. There is no mechanics of aggressiveness transfer or exchange between the tanks (or switch for close friends).

These two bosses will be accompanied by 8 droids which will appear in the same locations as the codices at the edge of the room. 4 angry looks and 4 countermeasures. These droids aren't wicked and can be controlled as tanks can redirect their aggression at them so healers aren't targeted. The dps will have to ignore them in normal mode and be content to descend Aveila and Esne to 71% of their health points each to pass in phase 3.

In addition, Aveila and Esne will regularly launch their outreach. This spell has a short channel and targets a player who can move an area of ​​damage effect during that time. At the end of the channel it will suffer polarized damage of the indicated color. So it will be necessary to use its polarizer module in the form of the same color as the type of damage suffered in order to reduce it. If you are the wrong color you will take heavy damage. Here are, as an example, the two types of pipe that you can see (red and blue).

It will obviously be necessary to leave the zone if it does not target you in order not to overload the healers. At the same time, they will regularly launch the burst of polarized energy. This attack is a large area targeted at a player who will see a polarized attack dealing damage to them after a few seconds. It is advisable to be in the same polarization, ie the same color, but the damage of this attack is minimal in normal difficulty. 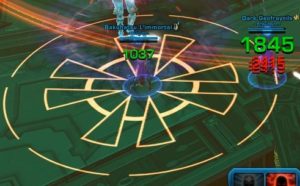 The third phase starts at 71% health bars with two invincibility shields. After a few seconds they disappear and the fight continues. Two new mechanics are implemented but their damage is so minimal that they can be completely ignored. Just heal the party and take the bosses down to 42% health.

However, if you come to experience difficulties, know that the two circles on the ground around Aveila (Blue) and Esne (Red) inflict damage if you are not polarized the same color. So get out of the area where they overlap and pass your module on the right color. The second mechanic requires cutting a spell channeled through the nexus but it is absolutely not necessary, you can do without it.

After 42%, the mechanics of phases one and two will be present, except the nexus channeling. Aveila and Esne will then be able to move around the room and follow you if you are out of range. Tanks are therefore not recommended to move too much. Finally, the furious looks gain an additional capacity which is not unlike the clock phase of Brontès. 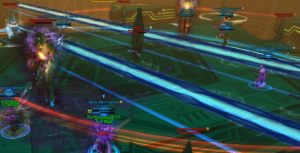 As this picture shows, two rays will be channeled. If you are the same color they will inflict little damage but if you are of the opposite polarity; expect heavy damage.

The nexus becomes destructible, but better not to tempt the devil, just eliminate Aveila and Esne one after the other.

In 16 player mode, the codices leave two modules and it will surely be necessary to help the healers who will be a little behind since they all have the same points of life.

Provide at least one off tank to hold the second boss that the main one would not take. This will help you keep the bosses in place in phase 4.

In addition to the classic rewards in command experience and piece of equipment, Aveila will also bring back a module that can be used on one of Iokath's thrones in order to take control of it. In addition, you can find one of the two decorations, one for each of the two protagonists, dropped at random.


Do you want to be up to date and know all the tricks for your video games? In gamesmanagers.com we enjoy playing as much as you do and for that reason we offer you the best tricks, secrets or tips for you to play non-stop. We offer you quality content and always updated to keep you up to date. That's why, in our website, you will find not only videogame guides but also tricks, secrets and thousands of tips so you can play to the limit. Are you ready to get it? Enter now and enjoy your videogame!
FFXIV - Fan Festival Tickets on sale ❯

Cloud Pirates - The Return of the Pirate Ships