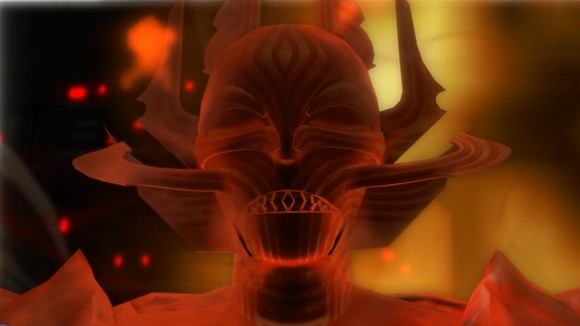 Today we bring you the Guide to Tyrants in Nightmare Mode. This is the second boss of the Dread Palace instance. He is not necessarily difficult and does not require a monstrous DPS compared to Bestia.

We will start by recalling the different mechanics in Hard mode. We will continue with the major changes with the Nightmare and then we will explain the path or rather the logic in this path.

Evolution of these mechanics with the Nightmare:

How do you deal with plates and furnaces on Nightmare Tyrant?

Global description of the checkerboard:

In Nightmare Mode the plates are organized in a sort of bizarre checkerboard pattern.

Below you will find the position of the plates in gray color and the void in white. In this diagram you will find an example of a path. 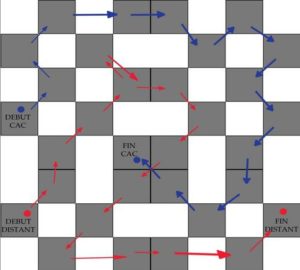 This path is not the only valid one. Many variables are possible and all guilds will have their preferences.

So we split the group into two:

How to manage the simplifications with this path?

Positioning, anticipation and communication are paramount in this fight.

I will take the example of the first simplification. 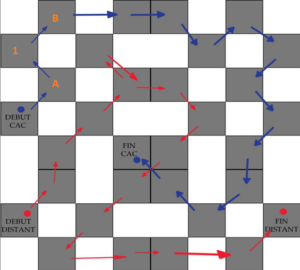 The second tank will take over the boss on the platform 1 : The advantage of this platform is that it has two other plates in direct communication:

This was therefore the management of the simplification for the Cac group. Management for the second group is simpler. It follows the predefined path at first. Of course, the second group has to remove the remaining plates (for example the platform A if still present) if the opportunity arises.

The first solution is to group the CaC furnaces on one side and that of the tank on the other according to the following diagram. This is the most classic management. 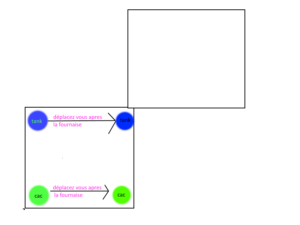 The second is to group the three furnaces (Tank and CaC) on the same point. This requires more precise timing of the lightning explosion. In terms of timing, the cast of the furnace is launched, then a few seconds later, there is the explosion of lightning. Right after that, you can regroup (you have 2 - 3 seconds) to regroup the furnaces. Then it will be necessary to return behind the boss. 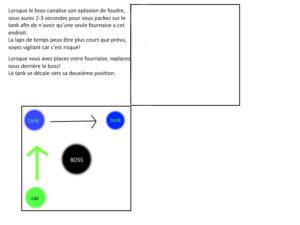 For the remote group, the management of the furnace is as follows: 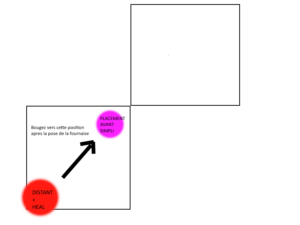 How to keep the group alive?

The great difficulty of this fight will be to keep your group high enough in health at all times. For this, more than on the previous bosses, it is important to have a complementarity between your two healers. One of the two healers will have to take care of the tanks as a priority, while the other will take care of the whole raid.

The objective is to anticipate the damage taking as much as possible.

For this you must locate:

In this fight, healing is everyone's business, so for classes that can, do not hesitate to choose the specialization that will heal you.

You can also take advantage of your Sentinels / Marauders in Juyo to put them in the same group as the tanks as part of an operation. So the care they provide is less likely to end up overheating.

Regarding Inspiration, the fight lasts a little over 5 minutes, so you have several choices:

The fight in videos:

As with each guide, we will offer you different POVs of this fight from different guilds. Each guild has its specificities and preferences.

For the moment no Pov Tank but it will not be long.

A first video with a GdA Sentinel Pov:

Here is an FT Pov with a CaC attribution. Our lineup was 1 CaC and 3 distant.

And a second FT Amnesia Pov with remote attribution:

Here is a first video of the Amnesia guild in Pov Malfrat:

And a second of GdA with a Pov Commando:


Do you want to be up to date and know all the tricks for your video games? In gamesmanagers.com we enjoy playing as much as you do and for that reason we offer you the best tricks, secrets or tips for you to play non-stop. We offer you quality content and always updated to keep you up to date. That's why, in our website, you will find not only videogame guides but also tricks, secrets and thousands of tips so you can play to the limit. Are you ready to get it? Enter now and enjoy your videogame!
FFXIV - Feedback # 31: Developer Info ❯

SWTOR - The Coruscant of the Outer Rim