A new update has just arrived on the test server. On the program, various improvements on one of the next two war zones, namely "The Odessen training ground":

Designer Note: Thanks to everyone who has tried out the new warzone on PTS, made videos, guides, etc. We are blown away with the support y’all have shown and want to thank you for your enthusiasm. We are pleased with the gameplay after the last Update so we spent more time on polish and optimization this last PTS patch. Of course, we will continue to eliminate bugs and listen to feedback, so please keep the bug reports and constructive criticism coming! While we don’t have any major optimization results for this patch we have identified a culprit and are working on fixes to eliminate its impact on the Warzone’s performance.


In addition to this, thanks to datamining, we now have a preview of Rishi's arena, with its loading screen:

As well as the new server selection screen which now takes into account the fact that there is only one type left (reference to the appearance of PvP / PvE instances): 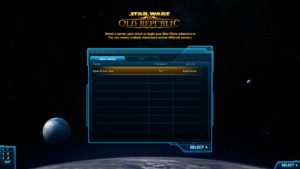 Let us recall in passing that new test sessions for the war zones are scheduled for March 12 and 13, between 1 a.m. and 4 a.m.