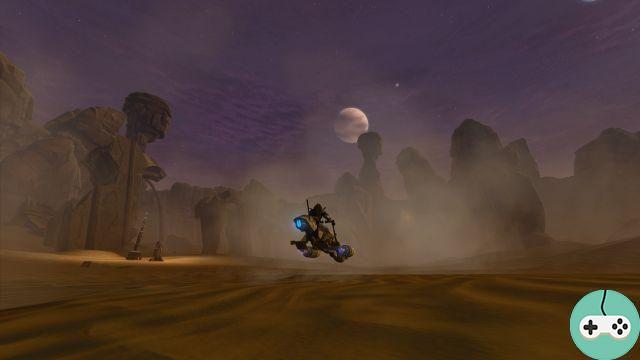 Achille, of the Tranquil Force guild, was able to test the new operation and he sent me the details of the new bosses!

If you want to keep the surprise, read no further! 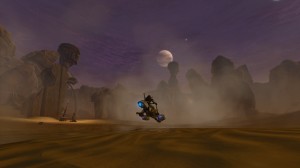 Welcome to Darvannis, a new world in the SWTOR universe that will make you think of a paradise in the desert ... or hell. Do not run too fast towards the adventure because the first boss arrives very quickly (finally!). The first thing all raid members need to do is buy a shield from a vendor at the entrance to the instance. Once your entire raid has it, advance to the Sandstorm and use it. Stunned will pick up a stacking debuff, leading them to their demise! After a few meters, the group will approach a shield generator (blue). You will notice on the horizon that there are more! 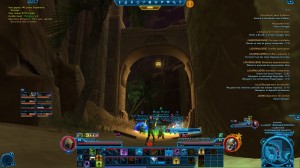 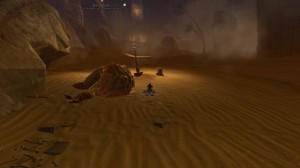 A member of the group activates the generator and the boss arrives directly at you. On click, the generator activates a large shield that allows the entire raid to be protected from the sandstorm (and therefore from the debuff).
The tank picks it up and places itself against a wall next to the generator. The boss sends flying many times, get ready to run to get back into the shield. In story mode, there is no tank change because the boss does not stick any debuff on the main tank.

At one point, a raid member is lost in the sandstorm. This person is teleported far enough from the raid and surrounded by enemies (rat-womp). I advise this person to run towards the raid and take refuge under the shield. When it's done, send the area damage to kill the adds.

After a while, the shield turns off and the raid ends up under a single small shield associated with a person from the raid. Regroup and then head to the next shield generator. Normally, it's up to the shield bearer to activate the next one (to be checked). The tank is placed against a wall and so on ... 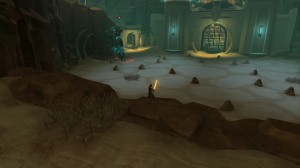 Here you are in front of a blazed boss ... Titan 6. As you can see, there is a set of rocks in the middle of the room which will be very useful during the fight.

The whole raid goes down and the tank picks up the boss. No need to turn the boss or whatever, it looks like there is no damage taken in front of the boss. On the other hand, during this fight, you have to be very attentive to the different attacks of the boss because the reactions are not the same.

Here are some of the boss's attacks:

Intermittently there are red areas to avoid for distant and on contact classes. 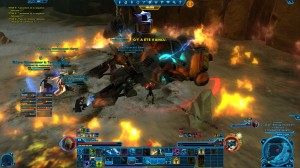 The boss does a nice little animation and a jet of flame appears. The boss is surrounded by a circle of flames so pay attention to your placement! 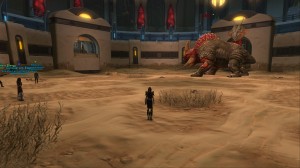 Welcome to the third boss arena. This is a really original boss with a lot of different strategies to try. First locate the second floor of the arena and then engage in combat.

The main tank engages the boss and turns him over because the boss makes several roars in front of him which will knock the tank down. You can consider a tank change at this time even if no damage seems to actually require it. Very quickly there are adds in the arena up and down. 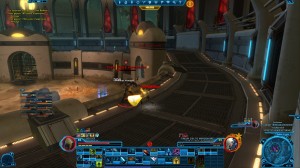 There are two types of enemies: arsonists and snipers. The arsonists are at the bottom, they walk towards a group member and drop a zone of fire there. Several zones are therefore simultaneously active.
At the top there are the snipers who will shoot the whole raid. These enemies can be drawn into the arena via different skills or a Guardian and Sentry can force jump to climb. Upstairs, for treatment, there are medipacks (similar to those in a war zone). Unfortunately, I don't have more information to give on the boss himself since I was dealing with the shooters upstairs.

The head of security

This is the puzzle boss of the instance which may make several players nostalgic because the watchword here is infiltration. As soon as you arrive in the city, the stopwatch starts with the associated objectives. Normally, you have 10 minutes to complete them. You must face security teams (blue, red and green) then the leader himself (normally ..), but beware the alert is given (enrage) if a security team is attacked by more than 2 people. You must therefore divide your raid into groups of two to complete the objectives. Along the way, you will find war zone type medipacks and champion droids that reappear (they should therefore be avoided as much as possible). In the houses of the city, you will find groups of enemies who don't need to be killed but who bring the city to life!

Unfortunately the group dissolved after a promising first try.

In conclusion, this is a very interesting new operation, with strategies much closer to the Star Wars universe. We also notice an increasing difficulty and the same amount of loot as what we can encounter on Asation Difficult or Denova Nightmare. However, given that the whole raid is equipped with non-optimized elite, it is difficult to realize the real difficulty of the operation. We can still notice a continuity with the general public orientation of the story mode of this operation.

Do not hesitate to provide additional information if you have the opportunity to go to this operation! Thank you again to Achille for this return.


Do you want to be up to date and know all the tricks for your video games? In gamesmanagers.com we enjoy playing as much as you do and for that reason we offer you the best tricks, secrets or tips for you to play non-stop. We offer you quality content and always updated to keep you up to date. That's why, in our website, you will find not only videogame guides but also tricks, secrets and thousands of tips so you can play to the limit. Are you ready to get it? Enter now and enjoy your videogame!
Between Me and The Night – Aperçu ❯

WildStar - Everything on the next update: Destination Arcterra!

Add a comment from SWTOR Preview Lair of Infamous Rascals