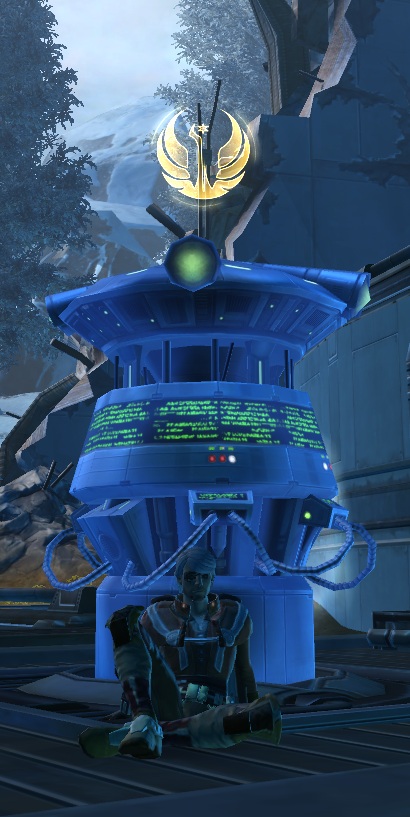 Proud of my title of War Hero (now obsolete because quickly accessible thanks to Update 1.2), I am seized with a real frenzy to talk to you about what I like most after moussaka, PvP.

For the record, when the game was released, I wasn't really convinced that a healer could have as much luck as a DPS in the middle of a battlefield. What astonishment was mine when I discovered that the surgeon thug was in fact almost born for the BG. Do not listen to bad tongues who think you are spending your time pouncing like a kid. I remind you, the thug is not a healer. Multitasking, its hybrid heal / DPS side will allow you to make a good majority of the available medals. That being said, you'll never have the power of a thug brawl and neither will you (unless you do just that), a scholar-type healbot (but we love them anyway). You will do a little of everything. If you add to that your ability to vanish (stealth mode), you have all the keys in your scabbard to squat the top of the ranking.

The general classification at the end of BG is based on the medals collected by each player. Objectives, taking a turret for example or even planting a bomb, do not (yet) bring a medal, hence the fact that some spend their time frag (killing enemies) rather than defending a door or placing themselves in regarding the huttball. Achieving the objectives and making the medal are not, however, incompatible.

Here is the list of medals accessible by the level 50 surgeon thug, champion stuffed (index 140): 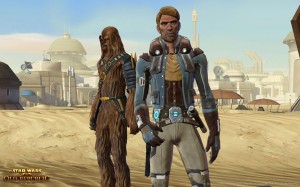 The healer is a rare commodity in general, as are tanks. SWTOR in its BG, allows all classes of the game to find its use. You have to be as responsive as possible because you will have to switch a lot if you want to try to keep the 7 other members of your team if you find yourself alone. Regarding the gameplay, unlike PvE, focus on your HoTs to the max, slow release medipac, kolto cloud, anything is good to help your friends (and random ones too, no favoritism). On the equipment side, if you complete the Medic PvP set, you will gain access to some rather interesting bonuses. When you hold two Medic parts, the power of the Kolto Cloud will be increased by 15%. From 4 pieces in the set, you will gain 5 more energy points. Namely that a set piece centurion can complete a set champion as well as the ultimate set combat master. However, since 1.2, the centurion stuff and the champion have completely disappeared to make way for a "rookie" stuff which therefore serves to compensate with the combat master and the very recent war hero which will be available once the BGs are listed. put in place.
As long as you stay in the same category of stuff, the bonus is offered to you. Another important point of the PvP stuff is that it allows you to increase your expertise. The higher your expertise rate, the more powerful the healing you will provide, as well as your attacks and hits.

Basically, if you go the classic route, your stats will be oriented around: tip> alacrity> critical (+ influx)

At high level, crafting is possible with looted armor in raid. The complete customization of the PvP stuff is quite complex and costs a fortune for an efficiency not yet allowed on the part of Bioware. However, 1.2 now allows you to craft PvP coins, you even have access to a fully customizable orange war hero set. On the template side, in PvP, the diagnosis is clearly to come out of your skills. It will not bring you anything and will make you waste time despite being free (in addition to having to do the post). Kills in BG are usually short if all goes well. So you always have the opportunity to "regen" or ask for a switch to be able to recover energy quietly. If the dusters in front of you aren't too dildoed, they'll target you first. Ask for a guard (tank protection) and do your job. Take care of your entries. Before you start to heal, stay invisible and send your backlash at an enemy. In addition to crit and dealing damage, you will gain an advantage point.
Here is an example of a possible template for PvP: 31/5/5 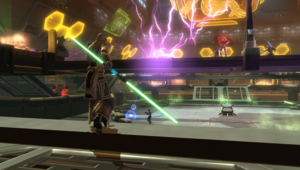 Where it gets complicated ...

Huttball is really not the right BG for the thug in general. We don't have any special skills that can allow us to actually be used for something other than healer (and more). We certainly have our stuns, but we suffer from a serious lack of speed. We cannot grip or bump. We will have to do with it. For the rest, Civil War and Void Star, the one against one is possible thanks to an abuse of pugnacity and HoT which will allow you not to worry too much about your HP. The thug has the ultimate skill of psychologically annoying the opponent. I arrive behind your back, I stun you, I type you, I restore you, I retype you, you slap me, I interrupt you, I restun you, I HoT, I DoT you, I disappear again, I retype you in the back ... You lose patience and you end up calling your Sith friends to fall for me.

Full stuff nursing champion (bravery 60), including the two implants and the master combat headset, here are a few dozen of the abilities that you can access. You will add to your equipment the relic obtained thanks to the datacrons as well as the trick rakata stim. Your critical, increased by your class buff, will rise to 40%, your inflow to 71% all your spells double their initial power. With just one use of the illegal drugs, you will easily heal 25k health in 5 seconds before you run dry. You can gain an extra cast by engaging the pugnacity right after you launch your first illegal drug. Two slow-release medpacks heal for around 5500 over 18 sec, down from 2536. All this to show you that the Surgeon Thug can hold its own as a primary heal.

Big regret however concerning the cloud of kolto which remains for my taste too random; not in its power but in the fact that we do not know who will benefit from it. It is ideal for a maximum group of 4 players including you. All this works on Ilum which since patch 1.1.5 is no longer very populated. Indeed you will notice when you are in BG that you have the boost, this thing which brings all your stat to level 49, as when you were doing BG between level 10 and level 49.

The heal that tanks (bonus)

There is an ability outside of self that allows you to instantly regenerate a certain amount of health and recharge quickly. Are you being sued? Stack two slow-release media packs, a kolto cloud while running. Send emergency medi-packs as soon as you "catch" the advantage and don't forget to refresh CD. Catch the bubbles, you will do wonders. Since 1.2, the 3rd avatange stack will allow you to benefit more from your instant spells.

As a mini-conclusion, never forget that psychological pressure can cripple a better-equipped player than you. If you annoy him enough, he will make mistakes that will be breaches for you to exploit to fall more easily but also allow you a little peace to bring your allies back up. There is one ability that I haven't talked about throughout this guide, the Kolto Pack to be more specific. This spell is just not part of the cycle I use (same in PvE). Accessible thanks to the advantage, I find his shot too important to be really relevant. Its activation speed is certainly fast and it heals much more than an emergency medipac but you will quickly run dry if you use it too much. Especially with this 3rd stack of advantage, the temptation is great.