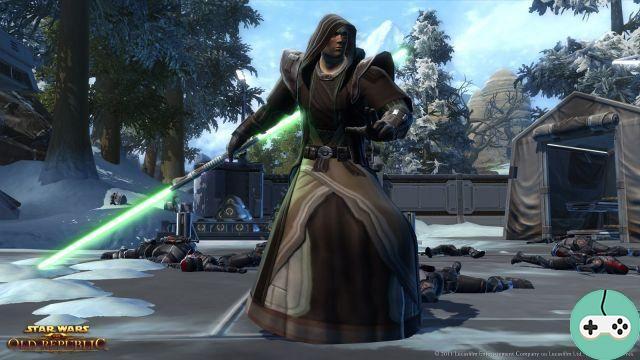 Hello, I am Master Winto, GM of the Grand Jedi Council, a PvE HL guild on the Battle Meditation server, and I am here to tell you about my personal experience of the Jedi Shadow (yes for once we do not talk not the Assassin) in his DPS specializations, namely Infiltration and Balance. 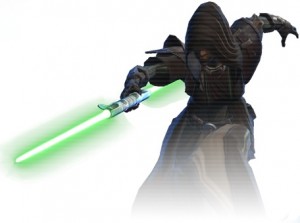 The Jedi Shadow has one of the richest and most varied Gameplay of the game that you will have the pleasure to discover in this guide, you will see ... The Shadow is therefore one of the advanced classes of the Jedi consular. It has three orientations, Infiltration (DPS), Balance (DPS DOT) and Kinetic Combat (Tank). It equips itself with a double-bladed lightsaber, a catalyst (in the case of DPS specs) or a shield (Tank) and has stealth, very useful for jumping mob packs but binding for progress in its levels. She obviously wears light armor.

You can then choose to focus on a very powerful single-target lightsaber DPS with a huge burst with the Infiltration special or rather a constant single / multi-target DPS with DOTs where the use of force is favored over that of the lightsaber with the Balance spec. 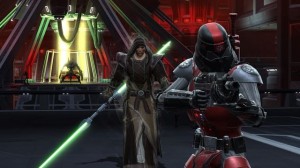 Since a video is often better than words, here's the introduction to the story of the Jedi Consular (hey that's my scholar) to make you hungry, but roughly speaking, the sequel takes place in the same vein. If you are interested in what follows, do not hesitate, having already filmed it, I will only have to upload it.

During your adventure, you will meet five partners (namely Qyzen Fess, Tharan Cedrax, Zénith, Félix Iresso and Nadia Grell). However, only two will be really useful to you:

However, this choice is not an exhaustive choice, it is the easy way. Other people will be able to favor speed and will then turn to a DPS partner (Nadia Grell or Zénith).

For more information on these partners, see this Sith

For more information on their location, refer to this guide. 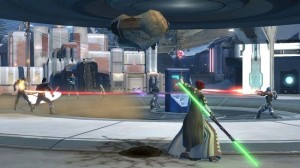 Biochemistry brings you medipacs and infinite stims (linked), more effective than stims looted on mobs. You can also unlock implants.

To be taken with Bioanalysis and Diplomacy

The artifice allows you to craft grips, crystals, sophistications, and (bound) relics that are some of the best in the game (at low level anyway).

To take with Archeology and Treasure Hunt

There cybernetics allows you to create modifications and shields. It also gives you the ability to create grenades that stun.

To be taken with Salvage and Illegal Trade

Synthweaving allows you to craft a few pieces of armor (this time unbound).

To be taken with Archeology and Illegal Trade

The template I will use is a classic 5/36/5 with a possible variant in 7/36/3 with the investment of two points in Expertise increasing the damage of TECHNIQUES by 12%. However, I prefer 5/36/5 since this damage (be careful not to confuse damage and technical damage) seems to me more than dispensable. 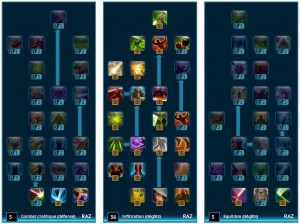 This time I will use a template 7/3/36. However, I would not go back on my choices, given that this tree seems quite "logical" in its investment of its talent points. 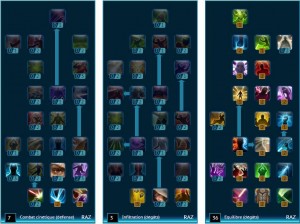 First of all, what is a cycle? This is a way of ordering abilities to maximize damage, defense, and healing, and in the case of Shadow Jedi, always have maximum strength in reserve.

We cannot, a priori, speak of a cycle in the case of the Jedi Shadow (as for many classes), but rather of priorities according to the procs. The following capacities should therefore be used in this order of priority. There are two different cases.

We can only see and reconstitute that Shadow Jedi Infiltration is NOT a multi-target DPS AT ALL.

Use saber strike as well as blackout if less than 20 force units (increases force regeneration by 50% for 6 seconds). Use Force Breach and Throw if and only if they trigger. Use the spinning strike when the target has less than 30% health. Of course, we are playing Shadow Technique.

There, the Jedi Shadow has an additional area but is not a multi-target DPS.

Use saber strike as well as blackout if less than 20 force units (increases force regeneration by 50% for 6 seconds). Use the Force in Balance as soon as the cooldown is over. Use the spinning strike when the target has less than 30% health. This time we are playing Strength Technique. 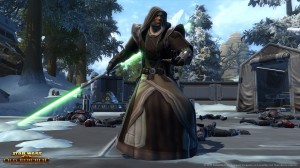 It should also be remembered that the Shadow Jedi has many controls (CC):

Well said, that makes them controls ... However, these will be more useful in PvP than in PvE (if not Maze of Mind). 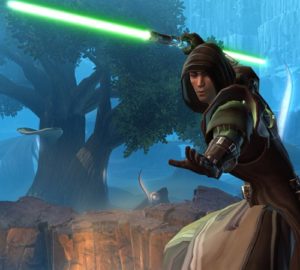 As for the cycle, here is first of all a small summary definition of the burst (yes, we are not all ultra savvy in terms of technical terms) The burst is therefore a short combat phase during which we try to do as much damage as possible. as soon as possible.

Here's everything you need to use, if possible at the same time, in order to boost its damage:

Using all of this all at once is going to wreak havoc, but, as I've often seen, watch out for aggro picks up.

How to get by in the event of a hard blow?

Who has never found themselves in their lifetime, without a healer behind their back and with all the aggression on them? In any case, not me ... The Jedi Shadow has however a whole panoply of spells allowing him to get out of delicate situations:

The Jedi Shadow therefore has everything it takes to hope to survive, even in the most tense situations (I like repairs at the end of the operation where the costs go up to 100k for some members of my group, but stay around 15k for me thanks to the fufu ^^). 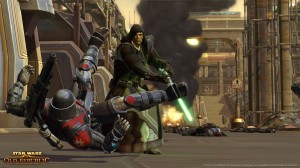 As a DPS, optimizing your stats is much less complicated than for a tank. All you have to do is type, type, and more. A good DPS does not take damage, so it leaves the healer (s) to take care of the tank quietly!

That being said, you should know that the main stat is willpower, getting stamina is a waste. It is then necessary to privilege the statistics in the following order: (Well there, I can feel the reproaches coming and I am open to any comments).

PvE gear can be found in the Reserves section of the fleet. You will need to turn to ranger equipment.

Once you have reached level 50 and if you do not have the level 55 expansion, you will seek to have the best equipment available for this level, namely the Black Hole as well as the Dread Guard / Hazmat via the ZL HM and lvl 50 operations. I'll let you take a look at this article to learn more about how to get it.

At this level you will have the opportunity to purchase equipment with no set bonus, allowing you to prepare for future Hard 55 Flashpoints.

Finally, at level 55 you will lean towards Black Market and Underworld gear via Hard Flashpoints and Level 55 operations. I will let you go to this article once again for more details. The caps indicated as an indication above are, of course, unattainable with the basic equipment, it will be necessary to delve into the optimization (yay), and there it is up to you to leave for hours of testing on a dummy. training and spending millions of credits on modifications ... 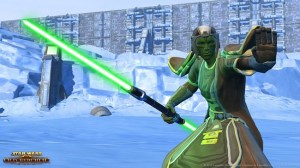 In conclusion, I would say that the Jedi Shadow is a very fun class to play, which adapts to all situations, which still takes a little time to master, but once you get to know it well, is really effective, both in PvE and PvP (hey, speaking of PvP, if the motivation comes to me I'll do a guide one of these days on Shadow Jedi Balance in PvP). I strongly encourage all new players to give this class a try.

Please note, following the various feedback from some guides, I would like to point out that this is a guide to getting started, allowing you to learn to better master your class and not an optimization guide: p

Do not hesitate to put a nice +1 if you appreciated, but above all to send me your suggestions, remarks or questions, I will gladly answer them with the greatest pleasure. I never said that I mastered my class thoroughly (moreover this guide is basically an Infiltration-oriented guide to which I added the Balance spec that I'm still training to master) so if a nice little Shadow (or assassin) wishes to bring his point of view, I welcome him with open arms.