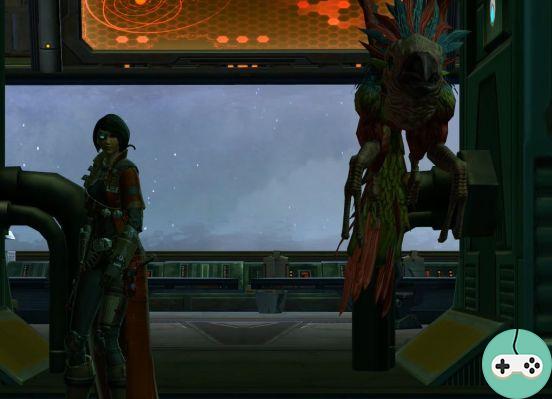 The two droids are defeated, it's time to tackle the last boss of the operation. Finally two bosses to tell the truth: Coratanni at first, then Ruugar.

The last and most difficult boss of the operation, the fight takes place in two very distinct phases on two different ships.

The first is to get rid of Coratanni and her pearl piaf. The second phase involves massacring Rugaar's traitor on his own ship. 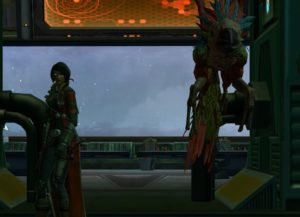 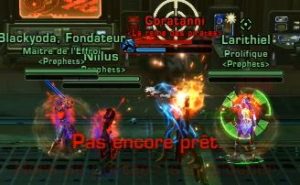 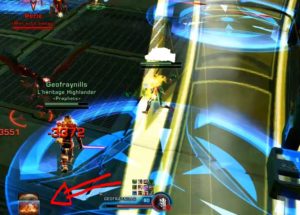 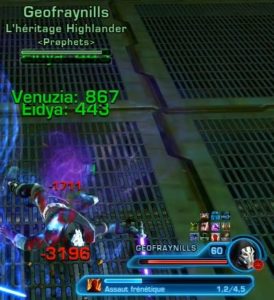 So we have 3 people who stay in the background with Perle: a Tank, a Healer and a DPS preferably the least mobile, or the least comfortable with the strategy. This group will be called the "remote" hereafter.

And the 5 other people find themselves more or less in close combat with Cora, we can distinguish 2 groups:

The trick with this placement is as follows:

J1, J2, J3 represents the group around Cora, J1 is the tank. J4 and J5 represent the Healer and the DPS withdrawn.

In real life, it rarely happens twice in a row and so it's much simpler than that, but to perform this strategy well, you have to be aware of this logic. The worst we had was 3 times in a row at CàC and it only happened once.

As soon as a ricochet shot is sent to the group of distant ones, the next ricochet shot will logically be at CtoC (except in extremely rare cases). J4 and J5 will make the transfer together then with J2 or J3.

It is the responsibility of Cora's tank to announce the target of the Ricochet shot.

Management of the purification console

Since there are 5 of us at CàC, we have 5 potential clickers. With practice, you will eventually be able to do this in 4 clicks. Once a person triggers a console, they will receive a debuff preventing them from using it again throughout the fight.

The first to trigger the console will always be Cora's Tank, this is the most optimal and it frees him from this function for the rest of the fight.

The second person will be the Healer, if your DPS is good, Ruugar's bridge cannons will be triggered before, otherwise you will have to anticipate a bit.

The last 3 people will be the 3 DPS, the order does not matter, it all depends on each person's situation. The key is to communicate correctly to know who is next. Usually this is someone who has just had the Ricochet Shot and is already well placed but there are always exceptions and that is why there is no rule.

The triggering of the console must imperatively occur BEFORE the Incendiary Grenade appears on the group. To do this, nothing could be simpler, the Tank must go and trigger its console after the first person receiving the ricochet shot has transmitted it for the first time.

Then, you have to trigger the console between 5 and 9 seconds after the disappearance of the blue circles.

Dispel, unlike in Story Mode, lasts long enough to kill you if you don't do it at the right time:

Perle's tanking isn't too complicated, but this dirty trickster's tendency to throw people around will undoubtedly get you in serious trouble.

When Perle goes for a walk, he will happily assault 3 people before he can be provoked again. These 3 people will find themselves thrown in the opposite direction and this is where the drama begins:

In short, you will understand, this apparently silly mechanism will make you tear your hair out, also to avoid problems as much as possible, it is the responsibility of the Pearl Tank to announce its targets so that they can choose :

Order of elimination and enrage

In order to quickly finish with the most complex mechanics of this beginning of a boss, it will be necessary to concentrate on this very dear Cora.

The longer it stays, the more your Healers will suffer until the complete wipe, for a start, 5 clicks on the console are a good point of reference, if after 5 clicks, Cora is still not gone, go back to pole, your DPS is insufficient and you will never fall Ruugar below 40%.

Once the ugly bitch is gone, we tackle his piaf, which becomes enraged very quickly.

Some adopt a group formation, I am rather adept to space the players a little, in order to have time to provoke him again just before his frantic assault of death.

Indeed, enraged Perle, does everything the same as before but much faster, his internal GCD goes under the second, so sometimes, we provoke, but the frantic assault eats your friend Healer anyway, hence the interest of put some distance between you so you increase the duration of its cycle and it becomes easier to recover it.

For security (or noobitude), I recommend double provoking Perle. The first Tank taunts as soon as possible, and the second Tank 1 / 1,5 seconds later. This is to ensure that Perle will go on one of the 2 Tanks (and as weird as it sounds, he will not always go on the second).

For the rest, there is nothing difficult, you just have to tear yourself away from healing during the frantic assault, and the other Tank must systematically reprovoke Pearl during the assault in order to reduce the damage.

If you take too long in the execution, you will then see a double enrage of Perle, it becomes almost impossible to resist his next frenzied assault, you can still manage to kill him but again, you will have de facto. serious difficulty on Ruugar.

Note: It often happens that Cora does one last Ricochet Shot for Glory before disappearing, be nice to yourself, don't screw it up. 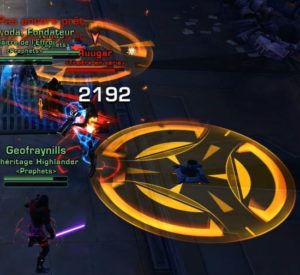 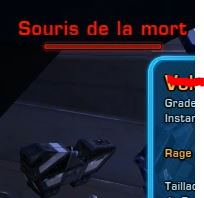 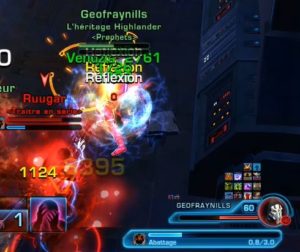 In order to avoid a number of problems, we have opted for a placement that looks like this:

Now that the stage is set, know that Ruugar is probably the toughest DPS challenge with Revan's core.

Your Healers can and should help nibble some DPS at the tap and at the very end when the anger subsides.

To arrive at these figures, we will send all of the group buffs available to Ruugar's engagement as well as your dopants. The fight lasts more than 4 minutes, you are supposed to use your doping twice.

For the rest, there is no secret, it is necessary to send the pate and maximize the uptime on the boss, survival although important must be a little forgotten in favor of the DPS.

In order to make it easier to deal with death mice, your Healers must learn to use their love for characters with the least amount of health to aim mice at people who are convenient for us.

The object of the game is to prevent mice from targeting fragile classes like our fellow Scholars / Sorcerers or Villain / Agent.

Our Healers have therefore gotten into the habit of always leaving a DPS with a little less health than the others, so that the mice take it for target.

Be careful, however, Ruugar has 2 abilities that can ruin your organization:

So you have to be able to react very quickly and get the right people back.

For informational purposes only, a Scholar / Sorcerer who no longer has the desaggro available will be almost OS by the first mouse, if both arrive from the same side, he is already dead.

add a comment of SWTOR - The Ravagers: Coratanni / Ruugar (Hard)