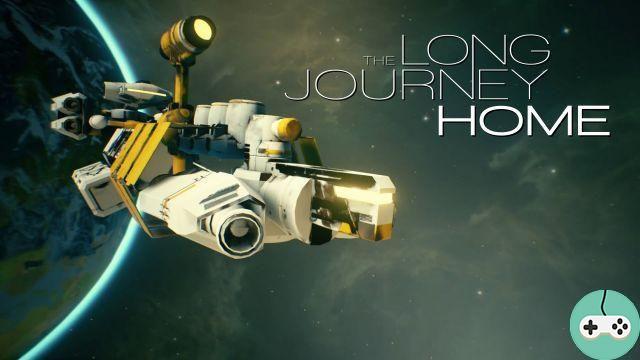 The Long Journey Home is a Space Exploration and Survival Game, developed and published by Daedalic Entertainment and released on May 30, 2017.

Mankind has conquered the solar system and is ready to explore the rest of the galaxy thanks to an experimental engine making it possible to make “leaps” in space. At the controls of the first spaceship equipped with this new type of engine, your mission is to make a simple round trip between the solar system and the Alpha Centauri system in order to test the engine in real conditions.

Unfortunately, not everything goes as planned and a failure occurs, causing an error during the hyperspace leap that ends up sending the ship to several galaxies of ours. The ship thus finds itself alone, isolated with an injured and depressed crew, trying to find a way to return to Earth.

The primary goal of the game is simple: return to earth. To do this, it will be necessary to travel through many systems and galaxies and, of course, during this trip it will be possible to meet alien species. 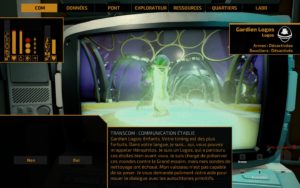 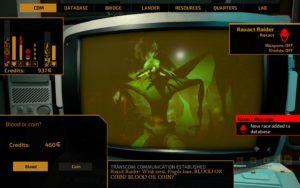 Some of these species are hostile, others are friendly while others just don't give a damn about you and will just keep going! As encounters, conversations, exchanges as well as your actions, it will be possible to forge alliances with certain species or to go to war against others (or simply to remain neutral). 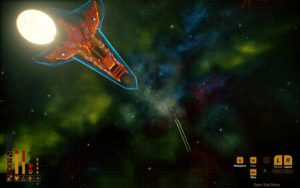 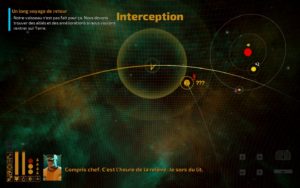 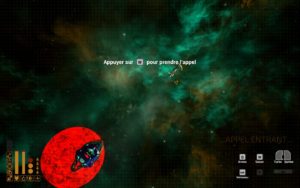 Of course, returning to Earth is not the only goal (or interest) of the game. Indeed, the universe is full of mysteries and secrets that it is possible to discover and elude. It will be necessary to converse with the alien races, explore solar systems, travel the soil of certain planets, search wrecks drifting in space, find and explore complexes ... 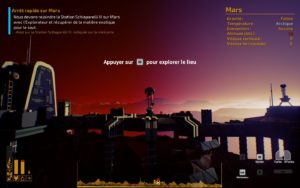 In addition to that, during your encounters, your new friends (but also your enemies) may ask (or demand) services from you. Smuggle, liberate a planet, destroy a ship, deliver a package, etc.

Each choice influence progression, some choices may even lead to completely blocking access to solar systems, or being harassed and attacked on sight, preventing you from using exchange or supply stations, etc.

The game is easy to learn. The game is heavily reminiscent of Out There in its mechanisms. Your ship has four gauges: 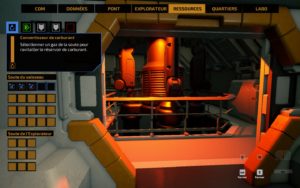 It is therefore necessary to recover resources on the planets or in stations to repair the hull (of the ship, but also of the exploration module), to have fuel and to be able to make hyperspace jumps.


Shell repairs itself with all that is metals (iron, etc.).

To fuel, it is necessary to recover gases in order to convert them. And as for the exotic material, there are two possibilities: use precious minerals or collect them directly from the stars! This last method is that of "the last chance", because the hull is destroyed very quickly leading to the destruction of the vessel and to numerous injuries for the crew (which can die). It should be noted that, according to the type of sun (pulsar, brown dwarf, red giant, etc.) and the modules of your ship (and its additional modules), the damage will be more or less important on the hull of the ship and the crew. 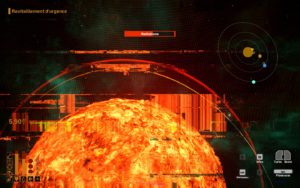 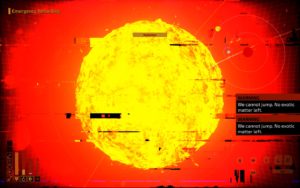 To recover resources, the easiest way is often to send the exploration module on the surface of the planets. Be careful, however, the module also has its hull and fuel gauges! You also have to be very careful to the conditions of the planet. 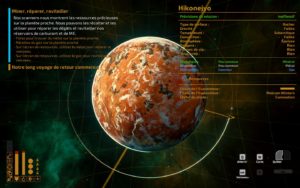 Indeed, a planet with a very strong gravity for example risks preventing you from correctly controlling the module, attracting it at very high speed to the ground and causing it to crash, causing it a lot of damage by the same. In addition, it will be necessary to use a lot of fuel to allow it to move and free itself from the attraction to take off.


Other planets can have extremely low gravity, but with very strong winds, rocking the module and making it very difficult to land where you want. There are also all-gas planets, requiring you to continuously control the altitude and orientation of the module, including during any extraction. 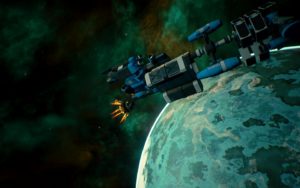 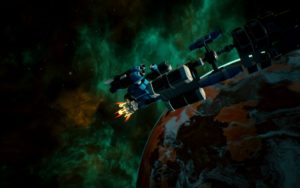 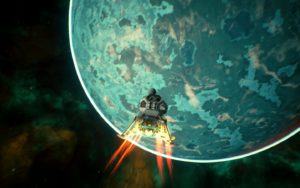 These are just examples, because the universe is generated totally randomly! For example, you can stumble upon a planet that is both rocky, with extreme gravity, high winds and extreme heat. These types of infernal planets should only be explored as a last resort, as your mod (and the mod pilot!) Both have a good chance of getting through!

On the other hand, you can stumble upon planets which are true paradises and which can almost make your crew want to settle there. 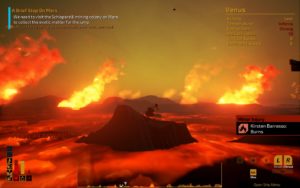 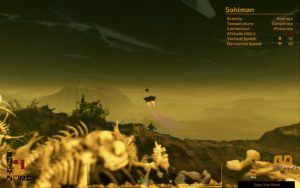 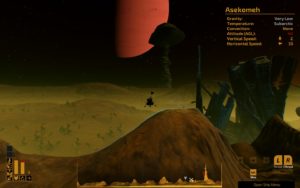 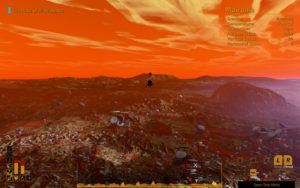 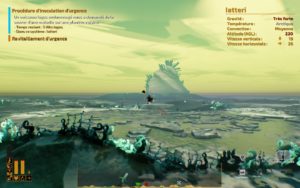 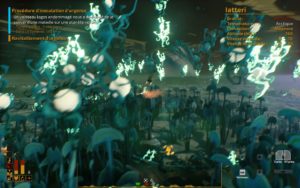 During the adventure, it will be possible improve the ship by adding new "extensions" to it. For example, a new long-range radar, a thruster allowing jumps to greater distances, data collection systems to retrieve more information on solar systems and their planets, etc. 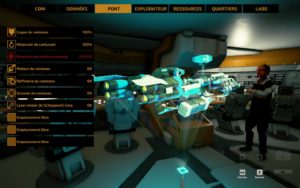 The crew also plays an important role! At the start of the adventure, you have to choose your members from a selection, each bringing its share of possibilities. For example, one member will be able to completely repair damaged modules, while another will be able to translate certain languages ​​that will otherwise be incomprehensible, another will be able to allow you to have better communications and thus be able to send alert messages. In addition to their abilities, they all have a "Tool" starting point that is specific to them (radio, repair kit, etc.). 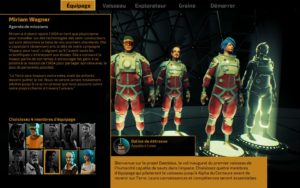 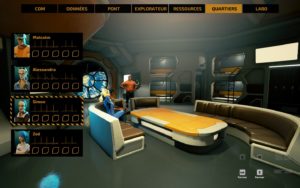 It also influences the use of everything found during the adventure. The installation of new functions, better control of the exploration module, the use of foreign technologies, the study of plants ... 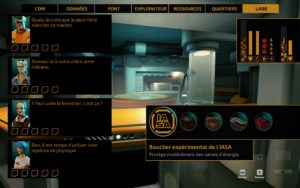 If you manage to reach Earth (or if you fail by trying), you will be entitled to a small summary of all your adventures, day by day. In case of failure, it is possible to retry the adventure by going back 1 day. 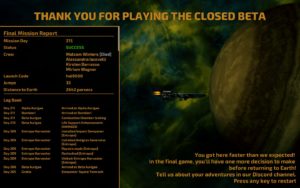 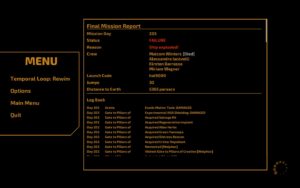 The Long Journey Home is an excellent space exploration and survival game. The difficulty is present (discovery mode and explorer mode) and the fact that the universe is generated randomly offers an "unlimited" lifespan. The game also offers many side quests to perform during the adventure and the possibility of (sometimes) choosing how to conclude them.

If you like this kind of game (Out There, FTL, etc.) don't hesitate and buy it!