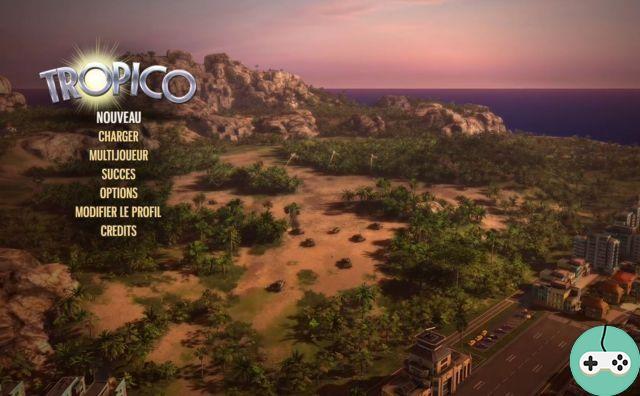 I had the opportunity to access Tropico 5 on Xbox One when the Penultimate version was released.

The principle of this fifth Tropico opus remains the same as the previous ones: we play as a dictator taking control of an island and who must make it prosper through the ages. Usually the game begins in colonial times, when we are just a colony of Her Royal Majesty, the Crown. The first challenge is to evolve enough to be able to declare its independence, to issue a constitution, to then develop during the World Wars, the Cold War and finally modern times.

In multiplayer, up to four players can play co-op, building their cities and sharing their economy on the same island. Players are free to choose to share their resources or, on the contrary, to declare war on each other! 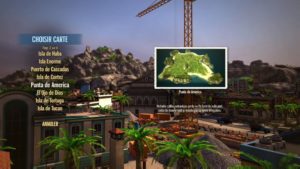 On the interface side, there is not much to say for the moment since there is by default only the mini-map at the bottom left on the first line, the remaining time for our term (4 years), the speed of the game (can be stopped, accelerated or left at normal speed). Below is my budget, the number of inhabitants on my island and the support of my population. 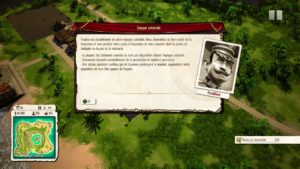 The management of the camera is quickly taken in hand, very classic. I can go right and left on my island, and have a good overview, or on the contrary zoom to the maximum. The details are really good and suddenly it is possible to track its little citizens. 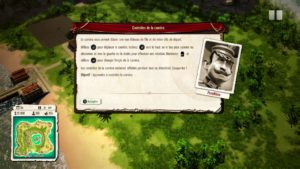 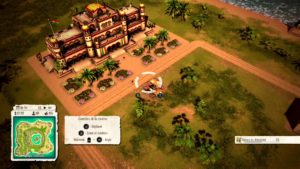 Each unit is selectable. You just have to place the cursor on it then open the interface with X which gives a lot of details. The same can be done on buildings with so much detail. 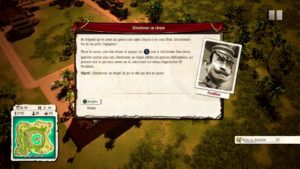 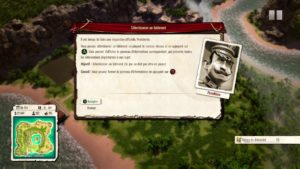 With the left and right trigger, I display the additional buttons: 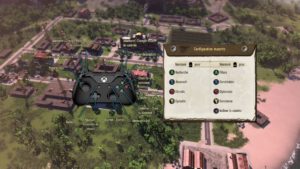 All buildings can be viewed with the Y key at any time during the game. They are arranged by category, such as infrastructure (roads and basic buildings), industry, residence, entertainment & environment, tourism, welfare and media, research & education, economy & foreign relations, army ... 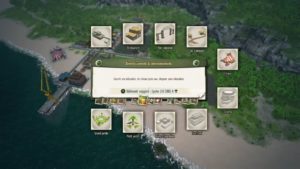 The most obvious is initially to create a logging camp (to collect wood), then to create a sawmill (to have boards). It is very quickly useful to set up a mine (after having sent a military unit to explore the terrain from the Governor's Palace if necessary to remove the fog from unknown areas that cannot be built). These resources are essential because it will make it possible to make money by exporting the surplus. 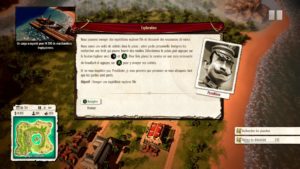 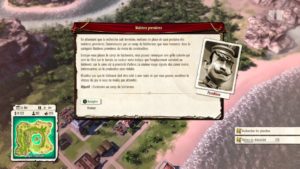 The goal of this era is to ensure that the tenure is sufficiently extended (by performing special duties for the Crown) until independence can be declared. For this, at least 50% support from the population is needed, while two factions oppose each other, the royalists and the revolutionaries. Of course, we want to switch to the side of the revolutionaries, without alienating too much the royalists that we need for the moment! Subsequently, other factions will emerge (militarists, religious, communists, capitalists ...). 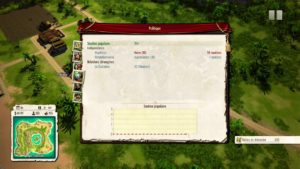 To please the population, in addition to building them houses to give them a home (and avoid homelessness), we must provide service buildings such as a Catholic mission, a bar, a restaurant, parks, a library, an opera ... In addition to increasing their happiness, and therefore their support for my cause, it will increase their knowledge and make them educated workers. In the meantime, it is always possible to bring in from abroad if necessary. Other citizens are important for the proper functioning of the island: the directors. They will give interesting bonuses, so you have to give them key buildings and make the directors coincide with the building where they will be most effective. 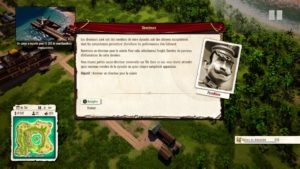 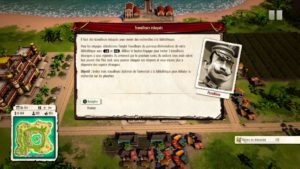 To have more raw materials to export, it is quickly necessary to add ranches or plantations. For each one, it is possible to choose the animals raised or the cultivated crops. As some tasks are linked to certain very specific resources, it is even possible to change them on the fly! The fishing port is also a good way to collect resources to sell (or eat locally). Then it will be necessary to embark on the industry (textile factory, steel mill, cigar factory, rum distillery ...). 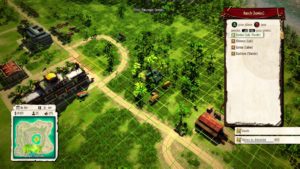 Regardless of the time, exporting is an excellent way to make money, based on beneficial trade exchanges which also allow it to gain notoriety with certain factions. On the other hand, it is important to pay attention to the people with whom you trade, because the enemies of my friends are my enemies! You shouldn't annoy your ally by trading with the wrong person. All these external relations are managed from the Embassy where it is possible to define one's position in relation to external factions. 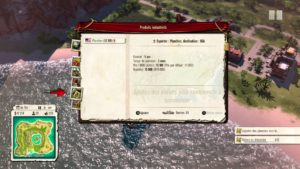 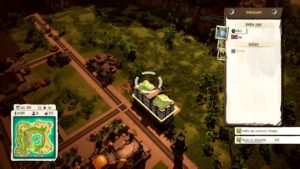 To develop properly, it also requires research. Our scientists are not arrows as you can see (screenshot on the right) ... Unfortunately, their incompetence has to be dealt with for the career of our El Presidente! 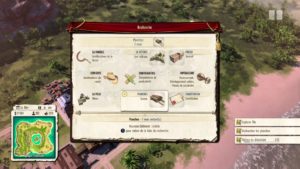 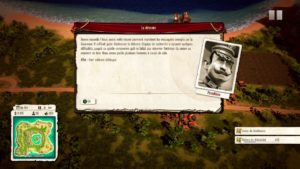 With a lot of effort and above all an enlightened policy (!), The big moment finally arrives: the declaration of independence! We must then decide on the constitution that will govern our newly created Republic. From now on, the imperatives will no longer depend on the renewal of our mandate as Governor but on elections. Because even if as a dictator we do not necessarily take these results very much into account, we still have to make sure that it is in our favor, even if it means tampering with the figures. 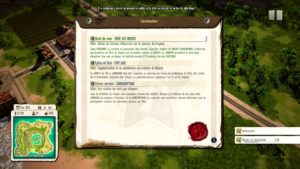 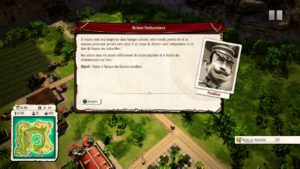 A new era opens up access to new buildings. It is now possible to build restaurants, a church, or even a university. Technology is improving and with it the equipment of our island: the paths become roads, the citizens use the car. It is necessary to follow, adapt, possibly replace certain buildings which take up space and no longer have much use, while being careful to keep the inhabitants of the island happy (in any case at least above 50% to win the election) with a home and a job. It is also possible that Allied or Axis soldiers attack Tropico, which requires from the World Wars to invest in armed forces (guard tower, military fort, barracks), our beautiful creation should not be be destroyed!

Against the backdrop of Caribbean music and with a particularly successful dubbing with the singing accent of the islands, Tropico takes us into a fascinating simulation game. The different levels of difficulty and the continuous assistance via the tasks to guide the player (even in sandbox mode) give a game accessible to the greatest number of people. If I had to make one criticism, it would be the sensitivity of the controller in Build (Y) mode. Selecting the right building to build is laborious, the cursor jumps several squares and this clearly deserves to be improved (perhaps by simply using the cross). Even if the adaptation to the Xbox One console is well done, I admit that I would have enjoyed my experience on the computer even better with the precision of my mouse. 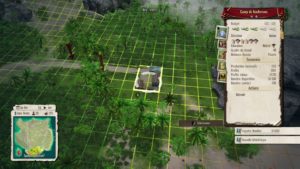 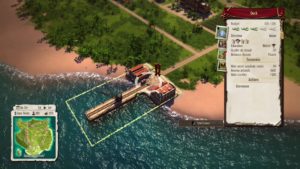 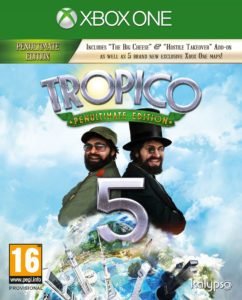 Add a comment from Tropico 5 - Preview of the last born of a worthy dynasty!