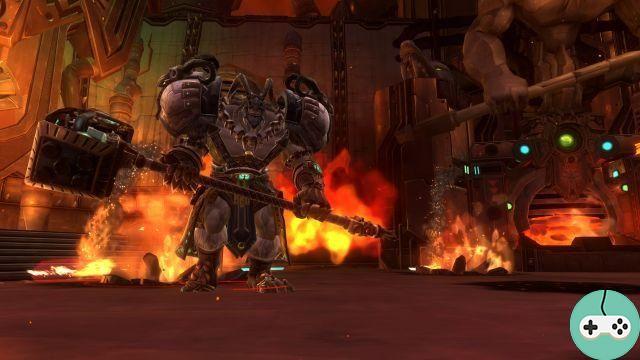 The dungeon des Ruines de Kel Voreth (Ruins of Kel Voreth) is one of WildStar's first two. It can be accessed from level 17 from the instance portal (in the southeast corner of the Dominion area of ​​Auroria), or from level 20 with the group search. It is not necessary to discover the entrance to enter the queue, this facilitating access to the instance for the Exiles. 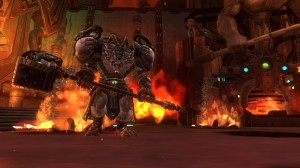 Grond the Corpsemaker is the first boss of the instance. It is a kind of big boar / crocodile that will be fought in the Arena of Blood, a large circular room covered with traps. To make it appear, you have to kill 3 groups of monsters in the arena, the rest fleeing when Grond arrives.

The traps that cover the room stun you when walking in and have a very short respawn time, no need to try to clear the room before combat. Note that they also work on enemy creatures. 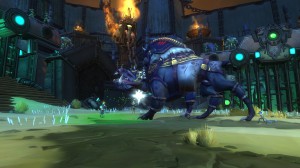 Grond should ideally be tanked in the middle of the room, to avoid falling into his trap. Grond will regularly target the tank with a cone telegraph and do the same shape behind his back. It will therefore be necessary for the group to stand on its sides.

He will charge a random player and kick him out, be careful with your placement so as not to end up in a trap. The tank will always return Grond to the center of the room after expulsion.

Grond will also channel a spell called "Trash" and then make a line telegraph that will rotate clockwise around the boss, dealing severe damage and knocking into the air. The further away you are from the boss, the greater the damage.

Phase I will mainly revolve around this spell, interrupt it AFTER the channeling of "Trash" using 3 control spells. You can also avoid the spell, but it's still quite difficult for melee.

At regular intervals, he will cast a spell called "Below", a vast telegraph centered on him, which will expel and disarm you, avoid him if possible, distances should in theory never take him.

As a result of this spell, he will rub himself on the ground and make 3 leech fleas come out of his coat, which the DPS will have to either kill or bring into a trap. They have 6.2K HP and will be killed quickly, the tank does not need to collect them.

This is a Grond jump on a player, followed by a conical telegraph, which the target will have to dodge to the side or else take huge damage. Grond maintains his position when he does, so it's just a matter of dodging to the side.

The various skills will follow one another until Grond's death.

The fight will alternate the phases where you face Drokk and others where he will disappear through the portal to make way for robots. Don't be fooled by the number of phases, the strategy is quite easy. 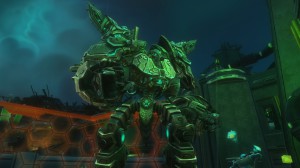 Drokk does good damage on his basic attacks, the tank should always stay above 70% HP. It will regularly launch missiles at players ("Deplete Silo") during combat, in the form of small circular telegraphs, to be avoided to relieve the healer of approximately ~ 2K of healing.

After this short phase, Drokk enters the portal and the next phase begins.

It will take good coordination and above all a good DPS to survive it.

Enslaved probes will come out of the portal and be distributed in the room. After a while they will each create a huge red telegraph on the ground, then self-destruct. There is only one way to avoid the damage: kill one before the destruction sequence ends, as the telegraphs will cover the entire room.

Gather near the door and wait for the probe which will stop as close as possible to the portal to kill it as quickly as possible. If despite everything your group lacks damage, stay together and use defensive skills to reduce the damage (Warrior's Defense Grid, Arcanero Shield, ...).

Once the probes are gone, Drokk will emerge from the portal.

Drokk emerges from the portal and, about ten seconds later, teleports you to the back of the room and ties you to an anchor. You have to destroy the anchor to be freed before joining the boss. Don't forget your group's Tank and Healer and help them destroy their anchors before returning to Drokk.

Drokk, meanwhile, stays near his portal and, in addition to the missiles he continues to launch randomly under the group members' feet, launches Suppression Wave, a telegraph in the shape of a donut that will get bigger as it inflicts 4K more damage and a knockdown. Dodge it properly to limit the damage (watch the darker red wave in the telegraph, when it gets to the edge the telegraph does damage).

Drokk will continue to launch this wave until the end of the fight, you can either dodge it, or move the boss. Having reached 40% of Life Points, Drokk re-enters the portal, the targeting phase begins.

Everyone must move away from the portal during this phase. Drokk will launch a targeting beacon at a random player who will have to run and flee the Probes who come out of the portal and go after him. The rest of the party will have to kill these probes because if they ever hit the target, they self-destruct (~ 3K damage).

The targeting beacon deals regular damage to the targeted player, be careful to keep them alive. During this phase, the beacon will change players several times.

At the end of this phase, the remaining probes explode and Drokk reappears.

Drokk will stay outside until his death, the ending is not very complicated. Be careful to avoid successive wave (s) of suppression and keep the tank alive.

Explosive probes ("Bombshell Constructs") appear in small groups from the portal and will move around the room on Drokk's position, then explode. Move the boss to avoid them and finish Drokk. 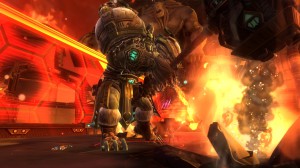 Trogun is the last and most difficult boss of the instance.

At the start of the fight, Trogun uses the Forge of the Eldans to shake the ground, causing cracks to appear in the ground from which lava spouts out.

Trogun is invulnerable and it is impossible to approach him. The party simply has to avoid the telegraphs and the damage. The cracks will continue to propel lava into the room throughout the fight, in the form of a small telegraph on the ground, completely at random.

Trogun will regularly, during the phase, use his hammer to make a volcanic strike, targeted at the tank. This will cause one more crack to appear which will remain on the ground for a while. The tank must imperatively avoid it under penalty of taking great damage.

Disperse yourself and cut the trajectories of the orbs before they reach Trogun, otherwise he gains a big damage bonus for each orb he has, in addition to adding area damage during subsequent volcanic strikes.

You must collect these orbs. If more than two reach Trogun, the healer will have a hard time holding the tank and the rest of the party.

Note that you inherit a power bonus for each orb picked up.

Trogun retreats to his forge and becomes invulnerable, the cracks in the ground disappear. Return quickly to the entrance of the room.

Trogun will spawn discs of fire from the forge, which will move towards the ends of the room. Avoid them by simply moving left or right and staying as far away from the forge as possible, to anticipate the arrival of the disks.

At the end of the phase, the cracks on the ground reappear.

Trogun returns to the center of the room, he will use all the skills from the first phase.

To complicate the fight a bit, when collecting the orbs, he will launch the same discs as in phase II, but their starting point will be the boss this time. Avoid the disks by collecting the orbs, but prioritize the orbs first, the discs are less powerful than in the previous phase.

Have you had the opportunity to complete this dungeon in beta?


Do you want to be up to date and know all the tricks for your video games? In gamesmanagers.com we enjoy playing as much as you do and for that reason we offer you the best tricks, secrets or tips for you to play non-stop. We offer you quality content and always updated to keep you up to date. That's why, in our website, you will find not only videogame guides but also tricks, secrets and thousands of tips so you can play to the limit. Are you ready to get it? Enter now and enjoy your videogame!
Wildstar - Mini-Game: Ideas from Falhstaff ❯