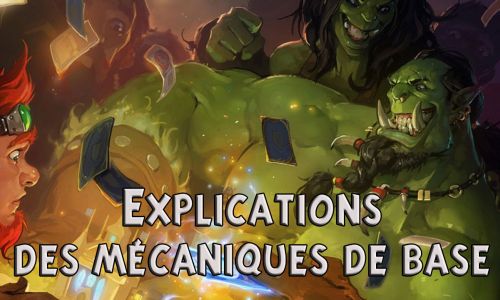 This guide assumes you've played HearthStone before, at least long enough to complete the basics. It assumes you're at least a little familiar with how the game works (basically you've done the basic tutorial). In this article, we'll explain several mechanics that are also very important, but which may not be immediately obvious in HearthStone.

If you haven't played yet, and are looking for some basic information to determine if the game is for you, we recommend that you do the HearthStone tutorial first.

By default, creatures have only one attack value and one health value. For example, Murloc Raider has 2 attack and 1 health. There is nothing else on this servant. However, as we will see in the following sections, some minions can have many additional effects.

A battle cry (or Battlecry) is a special ability that a servant performs when played from your hand (which is important detail). Wording is very important because the effect only occurs when the minion is played from your hand. This means that if the creature ends up on the table by any other means (whether it is being traded by an Alarm Bot or being copied by Mirror Entity), the battle cry does not occur.

There are a lot of different battle cries in the game and listing them here would be pointless. Most of the time, these are beneficial effects that give an advantage (drawing a card, dealing damage to an enemy minion). Sometimes the battle cry can be damaging, it's the price to pay when the creature isn't expensive for its stats (attack and health). For example, we have a creature that does damage to you or another that discards you.

The Death Rail is similar to the Battle Cry, the only difference being that it occurs when the servant dies, not when played from your hand. Wording is important here as well. If the card is removed from the board, but not killed (such as by Knock Out or Vanish), it does not trigger the death rattle. Be careful if your creature is silent, it will not produce its effect either.

Taunt is a special property that a minion can have. When a creature has a Taunt (which is indicated by a shield around its icon), the opponent is not allowed to attack other characters.

Taunt only applies to attacks, as opposed to spells. This means that only direct attacks from minions or the hero are limited by Taunt. Some minions, like Sen'jin's Shieldmaster, have Taunt naturally, but this state can also be granted by spells (Mark of the Wild) or battle cries (Defender of Argus).

Some minions, like Silver Squire, have a Divine Shield naturally but it can also be granted by spells (Hand of Protection) or War cries (Protector Silver).

Creatures are normally visible and attackable (unless a creature with Taunt prevents it) but it is possible for a minion to have camouflage. A creature in camouflage is still visible on the table (even if it's grayed out to indicate it's stealth) and can't be the target of attacks or spells. Creatures that are stealthed can still be damaged by area-of-effect attacks (like Consecration), as well as passive abilities that choose a random target (like Knife Juggler's passive ability). The creature with camouflage loses it when attacking.

A small clarification on this point: when a monster with Taunt is stealthy, the Taunt buff and icon remain active but the effect is removed as long as the minion is stealthed. Taunt will again limit attacks when the creature exits stealth.

Some minions have an Enraged effect. Enrage's perk (usually increased damage) is active when the minion is not at full health. The Enraged effect is dynamically updated, meaning that if a minion is healed, they will lose their Enraged buff.

Some minions have Windfury. This effect allows them to attack twice per turn, instead of once.

Creatures and heroes can receive immunity effects (unresponsive). This causes them to be invulnerable to all sources of damage for the duration of the immunity (which usually lasts one turn). For example, the Bestial Wrath Hunter spell grants a beast +2 attack and makes it immune for one turn.

Characters can be frozen. The majority of chill effects come from Mage cards (like Blizzard and Ice Lance), but Shamans also have a freeze effect and a neutral minion, the Frost Elemental, has a battle cry that freezes a character. A frozen character is unable to attack for the duration of the effect, 1 turn.

Silence effects negate any additional advantages (or disadvantages) that a card may have outside of its base stats. The silence effect removes all text from the card and enchantments. Silence is permanent. It can't be removed from a creature. If a servant returns to his owner's hand, he loses his silence.

Some creatures can grant increased spell damage. Spell damage affects the damage done by spells cast by your character. It does not include damage from your heroic power or damage from creatures.

Many minions, especially those of Rare or Higher quality, have passive abilities. These abilities are in action as long as the servant is alive and is not silenced. They vary widely in their effects.

Ownership and loss of control of a creature

In HearthStone, there is no distinction between a creature's owner and its controller (as is the case in other similar games). In practice, this means that whenever you lose control of a subordinate, that subordinate ceases to belong to you. For example, if your opponent uses Mind Control on a Noroît Yeti, they become the owner of that minion. If you then use Knock Out on that creature (causing it to return to its owner's hand), the creature will go into the Priest's hand and not yours.

Several cards and effects in the game cause the effect "back to its owner's hand", as we already discussed above. Examples of these cards are Knock Out, Vanish, Freezing Trap, as well as the battle cry of minions like Elder Brewmaster.

Several spells and battle cries in the game allow a creature to transform into another minion. For example, Metamorphosis transforms into a 1/1 sheep (if he subsequently gets tricked by the heroic power of the mage, I call it a barbecue).

Some Druid cards allow you to choose an effect. When you play these cards, you are prompted to choose between two different effects. For example, with the Power of the Wild card, you must choose between all existing minions getting +1 / + 1 or creating a 3/2 creature.

Some Thief cards have a combined effect. For such an effect to occur, you must have played at least one other card during the turn you play the Combo card. For example, Cold Blood grants +2 attack. But if it's not the first card you play this turn, its combo effect replaces its base effect and grants +4 attack instead.

Some Shaman cards have an overload effect. For example, the text Lightning says: Inflicts 3 point (s) of damage. Overload (1). This means that on the next turn, one of your mana crystals will be overloaded and unusable for one turn. In each case, the number of overloaded crystals is indicated in the text of the card.

Here is a rather long but necessary article and one that I wanted to do for a long time. Indeed, I can only with difficulty make a video on my channel to present all this.

I hope you enjoyed this article and see you next time for a new article or for a new video?