It's a fresh fish ! It's fresh! ... Hmm ... No, it's not going as an intro, let's start over. Episode 7 is finally here! The latter is shorter compared to previous weeks, but it is exceptional.

In the last episode, our companions got a big victory! But the latter brought more questions than answers. One thing is certain, their journey has only just begun! 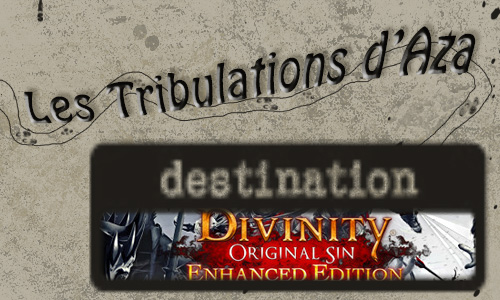 If you missed an episode or are looking for the following ones, you can find all the episodes of Tribulations of Aza - Divinity: Original Sin in the tribune Games Managers.

Summary of the previous episode

No sooner had we left the city than we encountered enemies. First of all, a poor merchant, gone undead and devouring his animal. Then an hour later, corrupt animals as well as skeletons revived by necromancy. Despite this, we safely reached a cave where we met a group of men on a mission and decided to help them.

We reached the end of the cave and basically got out. The group of men left for Cyséal to announce the success of the mission. As we made our way to the beach and Eveline's likely landmark, we passed four strange talking statues. It turns out that these are the famous statues we heard about in Cyséal and on the beach. They seem to be keeping a few things, or someone.

We finally succeeded in unraveling the secret of the statues: they served as a prison for elemental demons to keep an ancient magician imprisoned. He's a little ... wacky and we're not sure releasing him was a good idea.

We finally arrived in Eveline's hideout and we found her with Councilor Jake, revived thanks to the Sourcery and another person who looks strangely like the woman we saw on the beach. After a fight with Eveline and several demons she summoned, we finally defeated him and Jake was able to explain everything that happened in detail before returning to his eternal rest ...

As the group emerges from Eveline's secret lair, a person they know appears in front of them. This person is none other than Arhu.

Rassilon explains the whole story to Arhu since their departure from Cyséal. The corruption of the forest, the animals which are also corrupted, the living dead, the skeletons, the statues, the Ensourcellor who was to protect the places and, of course, Eveline, Jake and the mysterious Oracle Léandra, the white witch Icara and the cult's plan to resuscitate Braccus Rex.

“By the gods! No one could have predicted such a twist of fate! It's even worse than the darkest of my nightmares come true! They still can't plan to resuscitate him ... Not Braccus Rex! It's ... it's IMPOSSIBLE! "

“You seem to take this matter very seriously, Arhu. "

"Forgive me ... the news is really messing me up." This ... Monster ... was the worst tyrant, the very embodiment of terror! We must stop the madmen at all costs who are calling for his return. "

"Brrrraccus equals the king of demons in cunning, in perrrrfidie and he would undoubtedly even have enough to dethrone him. It is a horrendous question that you, I, or the world at large are doomed to once again become toys subject to the perrrrrversity of its whims. The prospect of his return is simply unbearable to me. And Icara ... knowing that she is entangled in this sinister affair only throws salt on the injury that is already putting me to death! "

"But if these necromancers are going to resurrect the famous Braccus, they must seek to meet near his grave, right?" Don't you know where it is by any chance? "

“We have long heard rumors claiming that his remains are buried in the underground chambers of the Church of the Seven. It is an old derelict church located to the east of the Cyséal backcountry. But I have to warn you, the place is teeming with living dead right now. It is highly probable that the rumors will eventually be founded. Where Léandra passes, the morrrrrts leave their tombs by the dozen ... and the corruption of the tyrrrrran itself seems to resist death. But now that I think about it, did anyone in Eveline's room mention a certain Cassandra? "

" No. Eveline and Jake talked about Icara and Léandra, but they didn't talk about a woman named Cassandra. "

" Okay. Speaking of people, why are you complaining about Icara's involvement in this affair? "

“Icara is a noble woman. A verrrrritable paragon of purity and benevolence. She may have actually killed Jake, but on the other hand, this guy was just a filthy Enchantress ... I can only presume his intentions, she must have been looking to foil her plans. sister. However, nothing can worry me about her anymore ... "

“We saw the person who is at the head of the cult, Léandra. Is this Icara's sister? "

"Léandra ... I know her, although I haven't seen her for years." As you guessed, she is Icara are sisters. However, I find it hard to believe that she can lead this cult and be mad enough to go looking for Braccus Rex. But unfortunately I cannot deny his involvement in this affair. But watch out for Trrrrraque-Sourrrrce, she's worth ten mages on her own, whether in terms of scathing, intelligence or magic. She will be a formidable adversary. "

“Jake told us about another man in the inn the night of this dark affair. Do you have any idea who that might be? "

“Alas, I don't have the slightest idea. But to rub shoulders with Léandra and Jake, it must surely have been another Sorcerer, unless it was just a poor victim sacrrrrrified during some ritual ... With that, I must quickly return to town and prepare defenses in case of rrrrreturn of Braccus Rex. See you soon my friends! "

Arhu runs in the direction of Cyséal, leaving the four companions who still have to take stock of all this information. 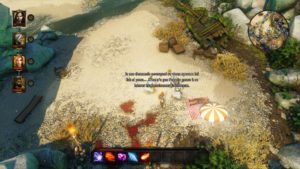 "Arhu doesn't seem like the type to get on it. That Braccus Rex has to be very powerful to impress him."

"Indeed. In any case, part of the mystery has been solved. Councilor Jake was murdered by this White Witch, Icara. Having said that, as I see it, we're going to have to deal with Braccus Rex as soon as possible. possible..."

"We have achieved our mission objective. But even if our orders were not to hunt down an undead lord, we cannot let this happen and we must prevent the resurrection of Braccus Rex."

"I totally agree! If Braccus is as dangerous as Jake, Eveline and above all, Arhu claim, we must prevent him from seeing the light of day again at all costs!"

The team therefore decides to return to Cyséal. Along the way, she examines the environments for possible traces of corruption, animals or even the living dead and other skeletons of all kinds. However, it seems that all of this disappeared following Eveline's death. The companions are all the same careful because, according to the statements of Arhu and the chief of the guard of Cyséal, a real army of living dead has invaded the region of Cyséal. As they approach Cyséal, the team notices ruins, which appear to be the remains of a small village on the outskirts of Cyséal, surely farms and fields that must have been used to feed the village. As the night begins to arrive, they decide to continue the journey and come back tomorrow.

Once they arrive in Cyséal, the first thing they do is go to the Guard post in order to inform Auréus of the conclusions of the investigation into Jake's murder.

" What is it again ? Even in the evening you come to break my pits? I have already given you all the authorizations to do your little life and your pseudo-job! "

“In fact, our investigation is finished, we know who is the culprit and what happened. "

Rassilon explains the whole story and the investigation, without forgetting the smallest detail.

"Let me understand correctly: some particularly rogue Sorcerers have entered town and turned a council member into a zombie, just for fun ... and this, after that same councilor was murdered by a mysterious witch who took off as soon as his crime was accomplished? By Bellegar's crotch, it sounds like those drunken tales we hear by dozens on drinking nights! Delusions, nothing more! Even though I'm sure Arhu agreed to any of your storytelling ... "

“These are not lies, this is the truth. "

“Yes yes, of course and I yesterday rode a unicorn. Anyway, whatever, whether it's the truth or lies, I think your affairs at Cyséal are settled. Beware of the living dead when you get out ... "

After this very interesting and useful conversation ... the team decides to go to Esmeralda to also explain everything to her in detail. Jake's widow is devastated by the team's revelations. After explaining to her that she was no longer suspected of the murder of her late husband, they left for the hostel to rest and plan what they were going to do the next day ...

Ragnarök Online Revo-Classique - Back to the roots of Poring ❯