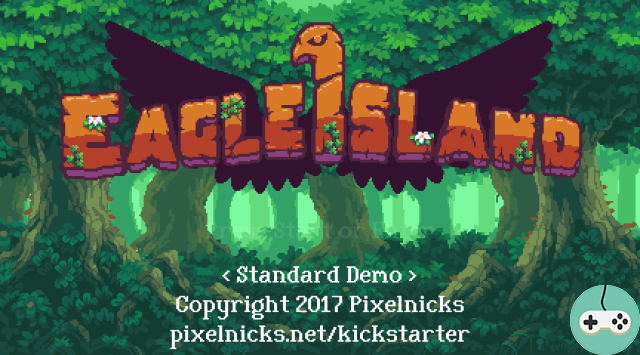 Currently on Kickstarter, Eagle Island is a platform game inspired by great classics like Yoshi's Island and Super Metroid, but trying to renew itself by taking components from other games also known as Rogue Legacy and Spelunky.

I was able to test the demo shared by the creators to convince the players and thus have a better idea of ​​their project. If you're interested, you can find it on their official website page at this address: https://pixelnicks.itch.io/eagle-island. The demo is an open world without a real objective, allowing to walk in their universe and to test the maneuverability of the character and his attacks. 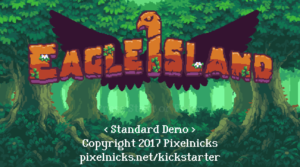 The little guy, Quill, walks in all directions and jumps quite high in a typical platform game environment with caves, climbs and descents. Quill is accompanied by a little owl, Koji, which can be two colors, either red or blue (there will be four colors altogether, but two are blocked). Depending on the color chosen, the attack is different, an arsenal inspired by falconry to kill various enemies such as mushrooms or birds. The owl hits in all 8 directions, which is very effective in the middle of groups and for hitting on the move. On the other hand, you should not miss it, because Koji's reload time increases otherwise! 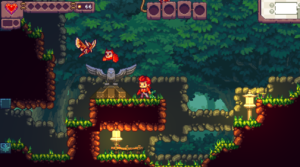 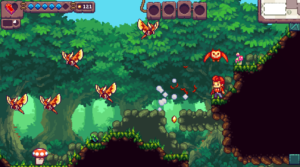 Very simply, the character has one heart, and when hit four times, that's the end. The map is regenerated and we are off for a ride. Information is slipped everywhere detailing the features planned for the final game. As for the story, Koji sets out to find his brother from the clutches of the monstrous eagle Armaura. 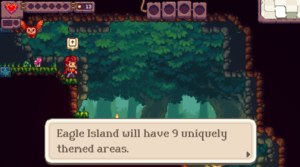 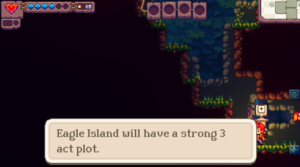 As we explore Eagle Island, we'll unlock the entrance to nine themed areas, each area arriving with its enemies, challenges, and bosses. The treasures hidden in the levels are guarded by a magpie and require the payment of seeds, obtained by killing enemies, to be opened. The items inside the chests improve the owl, asking to adapt its play mode to the recovered improvements. Of course, to add a strategic dimension to the game, it is only possible at a given time to have only a limited number of improvements.

According to the Kickstarter page, the advanced features are in a nutshell:

On the contribution side, you will be able to get the game from € 11,70 (the very first level is no longer available). If you invest 16,40 €, you will have the music and, with 21 €, the PDF explaining the history of the island and an artbook. There are of course higher levels, including the big one at 1171 € which will allow you, among other things, to co-create a dungeon with its boss!

Do you want to be up to date and know all the tricks for your video games? In gamesmanagers.com we enjoy playing as much as you do and for that reason we offer you the best tricks, secrets or tips for you to play non-stop. We offer you quality content and always updated to keep you up to date. That's why, in our website, you will find not only videogame guides but also tricks, secrets and thousands of tips so you can play to the limit. Are you ready to get it? Enter now and enjoy your videogame!
GW2 - Shadow of the Mad King ❯