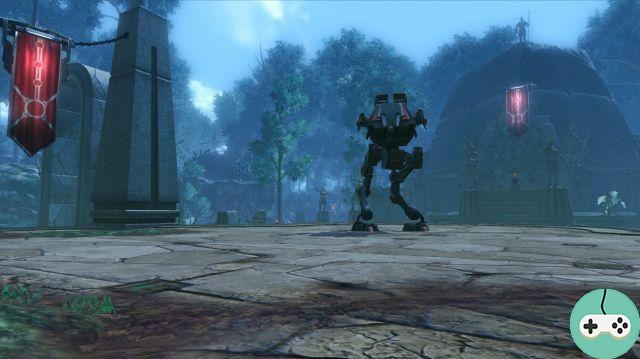 Difficult to make the complete guide of a world boss by attacking him in only two! Especially when the estimated necessary team for this same boss is 16 to 24 players (in theory)! Nevertheless, we are crazy, we did not hesitate to attack it to give you a preview!

The position of the boss

It is located on Yavin IV (well done you follow!) West of the training ground. This is the mission symbol on the following map: 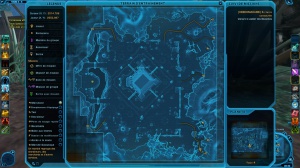 It is located on a small promontory isolated from the training ground by a chasm that will prove fatal if you decide to visit it. Only 2 bridges connect the promontory to the training ground: one to the north and one to the south. Each is guarded by 2 groups of enemies, a first easy group made up of 4 weak / strong enemies, then a larger group of 8 more powerful enemies. This group will not happen alone, without dying at least once (but the medical center is very close), beware of the 2 elites, they bump you! Watch out for the canyon's void! (in the middle of the bridge, two pillars allow these elites to be tanked with their backs to a wall).

Once on the platform, you will find one of the commanders of the revanites on Yavin. A walker! Just that ! he is named : 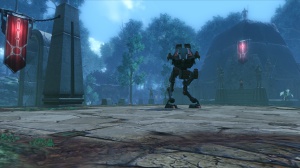 Ten million, six thousand and 920, yes 10, that's how many hit points this metal colossus has. "Have we ever seen worse"? Small additional precision, you only have 006 minutes to drop it! This is why a good group of DPS will be essential in order to kill him quickly enough.

Regarding the rest of the group, it should be enough to have a single tank and only 2 healers. Note, however, that this does not take into account any additional mechanics that could take place if the boss falls below a certain number of hit points (at 2 players + partners, we only lowered him to 93% of life, in stuff 192)!

The tank, if it is level 60 and well equipped, should take little damage, and healers should only have to deal with it. A second tank for a switch or to take care of the "AOE waltz" is only a bonus, as well as additional healers in case the DPS are not able to get out of an AoE!

The Mechanics of Combat

Although I didn't get the boss down below 90% health, I really enjoyed fighting him for his main mechanic which is innovative in SWTOR, what I called the "Waltz of the AoE". Throughout the fight, yellow areas appear here and there on the combat area, and constantly move randomly without targeting any particular party member. Walking in such an area causes it to stop and turn red. If you don't get out, you will take moderate damage and be thrown 30 meters away (beware of the void!). 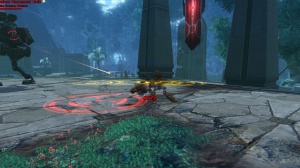 Managing these AoEs will be important during combat because if they get stuck in the middle of the group, they will do unnecessary damage. They are more and more numerous over time if no one fixes them. This is why it would be interesting to define a member of the group (the second tank for example) who will take care of passing in each AoE far from the group in order to get rid of it. The ideal is to have a Force speed or a power of the same type (roll ...) to get out quickly.

Apart from those waltzing AoEs, the walker stays static (unless you go out of range to move it) and steadily throws a small shot at its target, if it is at its feet then it tries to crush it . 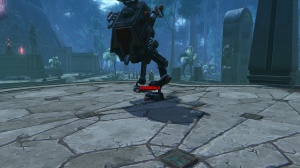 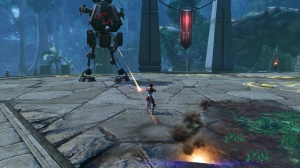 The only other notable phenomenon is a shot channeled by the boss: High Energy Ray. This applies to enemies in its target area (around the walker's current target) a debuff that stacks 10 times, lasts 10 seconds and reduces armor by 10% by stacking (so 100% armor removed to 10 accumulations). This is when a tank switch can come in handy, although the healer with me had no trouble keeping me alive with those 10 stacks.

But finally, after a bitter struggle ... the walker defeated us with a 41k shot! 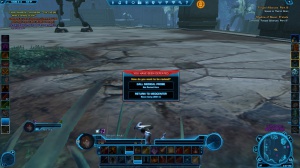 Special thanks Mietra, a very nice German player, who allowed me to face this boss to give you a more substantial overview than alone! Note that a weekly quest is available at the missions terminal, which consists of killing the walker.

So who will be the group that kills him first? Do not hesitate to send us a photo of his corpse! And to communicate to us the objects he gives!


Do you want to be up to date and know all the tricks for your video games? In gamesmanagers.com we enjoy playing as much as you do and for that reason we offer you the best tricks, secrets or tips for you to play non-stop. We offer you quality content and always updated to keep you up to date. That's why, in our website, you will find not only videogame guides but also tricks, secrets and thousands of tips so you can play to the limit. Are you ready to get it? Enter now and enjoy your videogame!
WoW - Races: new models soon ❯

Overwatch - Lúcio Guide: “Come on, all together! "