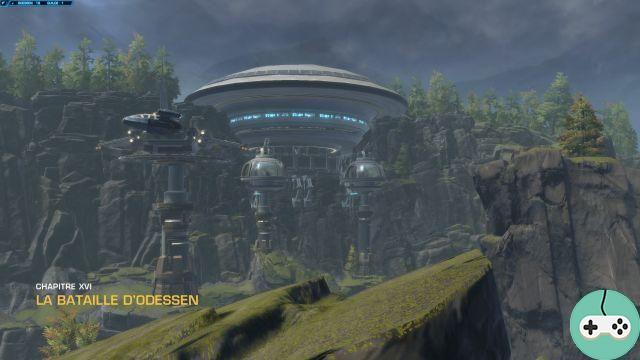 The new situation is perilous. Scorpio, through his betrayal, puts us in danger. She has many strengths in controlling the fleet and she has too much information about our operation, especially our location. As we try to figure out how Arcann was able to block his attack and keep control of the ships around him, Scorpion hacks our communications network and tells us that she passed our coordinates to Arcann. 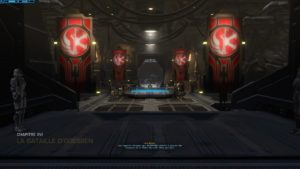 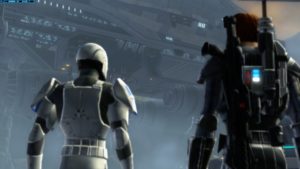 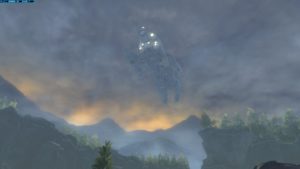 Aric and Kaliyo offer to keep the base. Their disagreement does not suit us and we assign Thorian to lead them. The others all go to the cenotaph to counter-attack Arcann and his ships that have arrived in orbit. We get as close as possible and ask Theron, who intends to take command of the omnichannel, to shoot down all the ships. We go on our side to the shuttle to storm Arcann's flagship. Lana explains her plan to us and we send Vette to neutralize the cannons while Gault goes to deal with the shields.

Theron opens fire and creates a breach allowing us to infiltrate. As soon as we arrive, several waves of skytroopers appear. They end with two skytroopers of high difficulty. Protect yourself at this time by carrying out a long-term check if possible. This will make it easier for the healing partner to keep you alive. 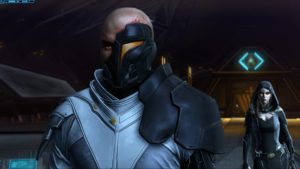 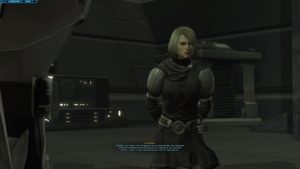 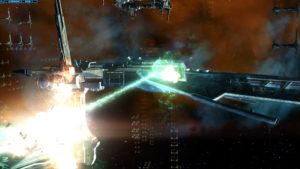 We then follow Senya as Theron continues to fire on the fleet. He seems to have difficulty with the Omnichannel. Tora leaves her post and leaves T7 in charge to go help her, but T7 is pushed back by an assault from Scorpion. Then intervenes Koth who has infiltrated and intends to do his part against Arcann. He manages to isolate Scorpion's ship. 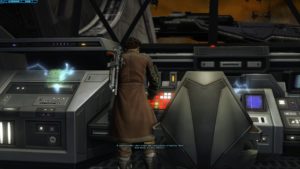 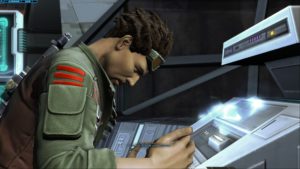 On our side, Vaylin contacts us and tells us where Arcann is. His objective is to confront Senya. So we continue our journey with Lana while Senya goes to face Vaylin. We access a terminal where we can choose between two pieces of equipment: turrets or a Zakuul weapon and shield set. We choose the latter to infiltrate the ship, but two Knights of Zakuul and turrets were ambushed. Their damage is monstrous, avoid the cone of the flow of force. We control one with the stun missile to reduce early damage and deal with turrets first as they have less health. Lana will briefly control the Second Knight during this time. Then we'll just have to kill the knights one by one. We then collect the weapons scattered around the room and we are equipped with three additional abilities:

Two other knights will block access to the elevators. They have the same capacities as those of the ambush. Eliminating them will give access to the assembly bridge. Then two more on a catwalk and so on until you reach Shernisa Varless. Activating the shield will help protect you from its devastating attacks. 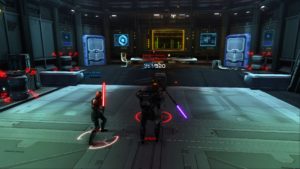 The next opponent is KJ-931He seems well equipped but Koth, in command of the cenotaph helps us by shooting him from the outside. We are not very happy to hear of his presence even if any help is welcome with Arcann. KJ-931 will be more difficult than our previous opponent. It sends volleys of missiles (burst of mortar) to dodge and lasers throughout the room. Only certain points are out of scope of his attack and it will be necessary to place himself there. In addition, it sometimes channels a pulse cannon which must absolutely be removed and which cannot be interrupted. The partner is very likely to be inside given the width of this attack. Or he can throw a gravity grenade. All of these abilities do very high damage, as does her basic attack. Always keep Lana behind the boss to avoid her pulse cannon. In addition, we must remind us during the lasers and the electric spikes that appear can kill it during this time, do not set foot there either. 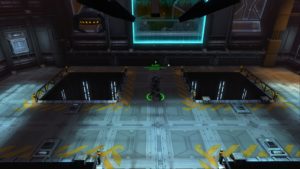 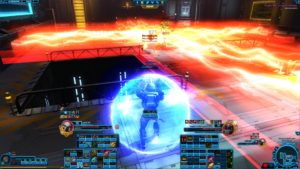 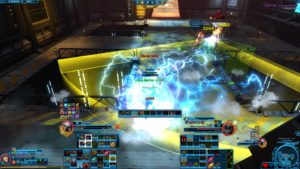 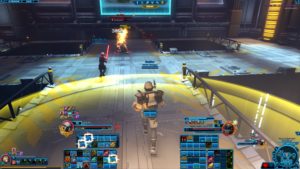 Keep in mind that this fight is the hardest to date. Do not leave without all your abilities, a moment of inheritance and unity available. Use the moment during lasers to compensate if you can't type from a distance. The faster you fill the 20% of life to be removed between each laser, the better.

After having overcome this ordeal with difficulty, we will face Dara Nadal. This champion deals heavy melee damage. The shields we can collect from the surrounding rooms can help protect against them more easily. His punching power is still less than the previous droid because he has less health and we can easily reflect this damage. Its special feature is the Breath of Zildrog. This spell causes 4 areas to appear in the room which will move in width.

Theron then contacts us and informs us that he has discovered Scorpio's plan. The fleet is about to shoot us to eliminate us with Arcann. It does not change anything for us because we arrive at the catwalk. The first part of the fight against Arcann is easy. Its damage is minimal and it is enough to dodge all its assaults by leaving the areas of effect to reach 74% of its health. It is then that he realizes that we have changed and that he becomes dangerous. 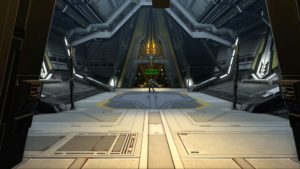 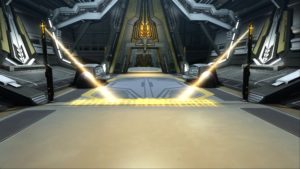 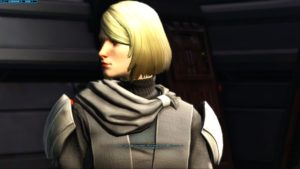 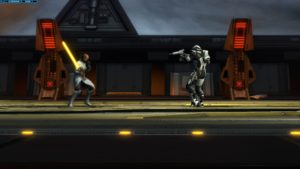 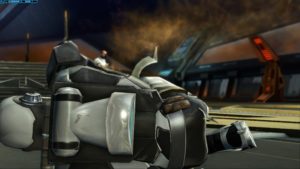 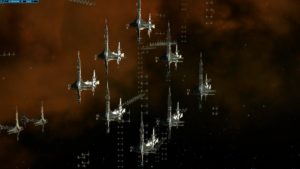 The fight is easier than against KJ, but the timings are just as tight. Arcann launches three attacks that must absolutely be avoided: the guard and leaping shock which are both circular areas and the shock wave strike which is conical. These three attacks kill or remove the shield that must be used during combat. It is on the right and must be picked up at the start of the fight. It's impossible to do without it because it serves to reflect other damage.

At first, Arcann channels a protective shield and you have to use the shield to deflect the lightning explosion that follows. Arcann then loses his protection and summons two vortices at the edge of the map. These vortices target us and the shield will be used to eliminate them by returning their attack as for the explosion of lightning. You must then continue until around 20% where the boss phases and returns to the center of the room. He channels a shock wave strike that must be dodged and then, with the shield, return the damage by getting closer to him to use the second spell that will stun Arcann before finishing the fight. 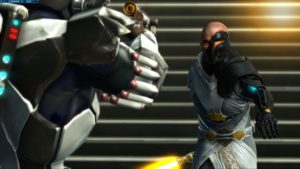 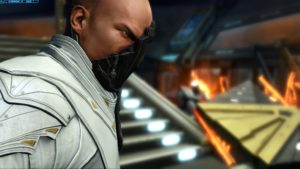 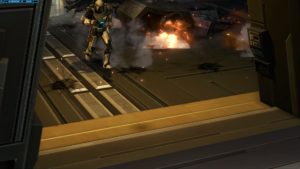 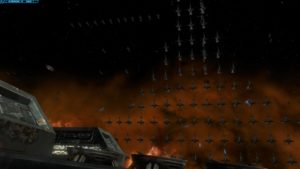 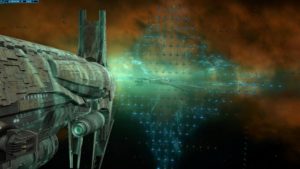 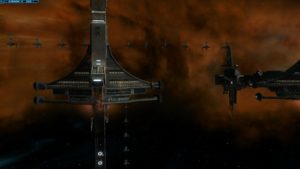 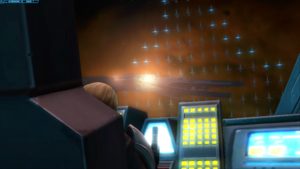 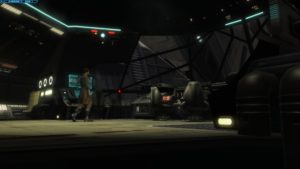 This last step can be skipped if you have a reflection. As soon as Arcann enters this phase, use the reflection and his life will melt like snow in the sun. The last cutscene will then be triggered. Arcann being overwhelmed by our ability, he chooses to pounce on us in a desperate assault that we repel. Arcann is injured and is no longer able to stand up to us.

The Eternal Fleet opens fire and damages the ship we are standing on. We go out to flee, leaving Arcann behind us. Debris ends the debate by locking up Arcann on the upper deck. We make our way to the ship in the hangar and get out of this hell. And if we think we are doing this, it’s bad for us! Koth has taken control of the cenotaph and steals it while Senya tries to save Arcann and flees in her own shuttle.

The forces of the galaxies are diminished, we have won this battle, but the conflict is not over. Vaylin takes the throne with Scorpio by his side. This marks the end of Knight of the Fallen Empire, but the war will continue ... in Knight of the Eternal Throne.

Add a comment from SWTOR - KOTFE in master mode # 16