Responding to my proposal to publish his opinion on the game, via the players' platform (which, I remind you, is addressed to all visitors), TheDragon offered me a mission report! I therefore invite you to discover his evolution as a Jedi Consular through his own experience.

Here after having received the precious sesame (my access for the early access) Friday evening December 16 (around 17:30 pm), I feverishly connected to the game. And there, first dilemma, which server to choose? Liking the RP as well as the short queues (xD) I leaned towards the spanish server RP Kessel Run. No queue I have had since Friday, having played all weekend, to believe that the RP servers are not popular (good for me, the force was with me!).

And here I am in the world with my Jedi Consular (and yes). First grandiose impression, we feel that we will have great things to accomplish and the immersion is total. Scripted quests with storytelling (great for those who don't like reading endless xD quests) and its own character who speaks and makes choices. Throughout your quests, you often have the choice between the bright and dark side (yes, even with a Jedi): it's up to you to make your choices and assume them later.

The first part of the Padawan apprentices takes place on the planet Tython and not Typhon as some say. This is where you start your learning of strength. This area is for levels 1 to 10 even if you will probably start from here towards level 6. I will not tell you about the quests it would be obscure to spoil you thus the fantastic scenario which awaits you.

After completing the quests on Tython you are sent to…. I give it to you in thousand, the capital planet… CORUSCANT! And yes and there Attention the eyes it will send severe. A HUGE city with its crowded traffic and intriguing occupants. 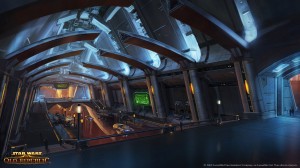 Here you can learn your "trades" or rather crew skills and do level 10 to 16 quests. You are entitled to 3 skills, only 1 of which is crafting.

For my part, I took Archeology, Treasure Hunt and Artifice. Why these 3? Quite simply to optimize that of confection namely theArtifice. The artifice allows you to create objects oriented towards the improvement of lightsabers. Color crystals, sleeves and optimization. It also allows the higher level to completely create Lightsabers. But to build this skill you will need crystals that are collected or obtained through the Archeology missions and gems that are obtained with the Treasure Hunt. This is why I took these two skills !.

The profession system in SWTOR is completely different from what we can see in WoW for example. There, it is not really you who work or make, but your companions. It is they who go on a mission to bring you your components and it is also they who take the time to craft (make) your items. In addition, each mission costs time and credits: the higher the mission level, the higher the mission time and the cost, knowing that the companion's affection towards you decreases the time cost of this one as well as the probability of proc of the mission, that is to say the fact that the companion brings you more objects or of better quality than those initially planned.

In addition you have a deconfection system: when you create an object you can destroy it by trying to recover a small part of the materials used to create it. During each deconfection, you also have a low probability of learning a higher version of the item's initial recipe. Let me explain to you how to create a white object (example: Channel of power 4). During its deconfection you have the possibility to learn the blue version of this object which has characteristics a little higher than the white version. Likewise, when you unconfigure a blue object, you have the opportunity to learn the orange version of the recipe.

With this system, you can therefore continue to beg while your companions work isn't it magnificent? ) 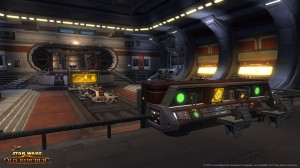 Another aspect of SWTOR are the Flashpoints, “instances” or dungeons of WoW. They initialize in the morning and you can only do them once every day. They can be done in 2 or 4 and are filled with elite enemies and champions (for the bosses). They allow you to gain blue and orange quality items as well as sociability (not to mention experience). The first is that of L'Esseles, ship of the Republic, which is made from level 10 intended for 2 players (but which can be alone, I did it alone at level 16). Then comes that of the Martel station (levels 13-17) both accessible from the Coruscant statioport. 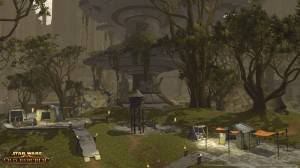 The next leveling area is the Taris area, a planet completely destroyed by a Sith lord in the past that is filled with toxins and dangerous monsters. This is where I stopped there last night, leaning on the bar of the local cantina…


Do you want to be up to date and know all the tricks for your video games? In gamesmanagers.com we enjoy playing as much as you do and for that reason we offer you the best tricks, secrets or tips for you to play non-stop. We offer you quality content and always updated to keep you up to date. That's why, in our website, you will find not only videogame guides but also tricks, secrets and thousands of tips so you can play to the limit. Are you ready to get it? Enter now and enjoy your videogame!
SWTOR - The Datacrons on Tatooine (Empire) ❯