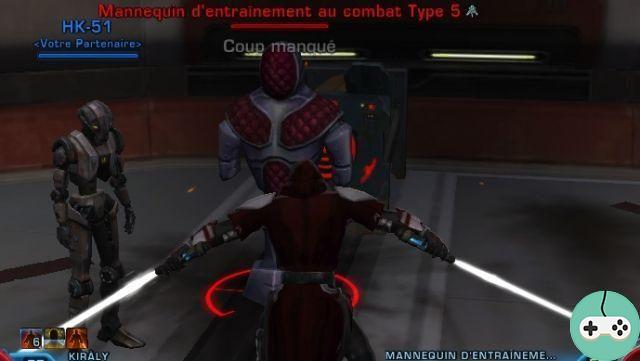 I start with this statement that I have heard too many times:

To do High Level PvE, you need 120% minimum accuracy, to hit every hit through the boss's 10% dodge.

Certainly, we heard it more when the game was released (two years ago now) than now, but that does not prevent this question from having to be answered correctly. 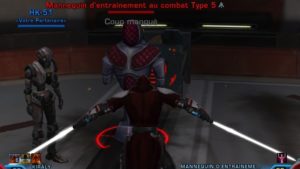 This first debate concerns in priority and almost exclusively the offensive characters (DPS): the doctors do not need it to succeed in their care (but their attacks do. However, it is not a priority on their character), and in at the same time, who would want to dodge a healing spell?

With this, the tanks are primarily there to take hits, rather than dealing damage * they will instead turn to defense, absorption and shielding.

* Maybe in case of a great suffering of animosity ... but sacrifice chances to trigger his shield, the absorption of the latter or just to dodge? I don't think that's a good idea: a dead tank doesn't protect anyone anymore.

I focus first on the operation of precision: it is the reverse rendering of the defense (dodge) of the target. When we say "a high precision decreases the opposing defense", it is for the named dodge statistic Defense. In any case, despite sometimes long-standing confusion, does this reduce the target's armor (i.e. damage reduction).

So, I don't seem to have seen an announcement from BioWare (or so, I missed it), but by observation, and sharing information, here's how precision works: 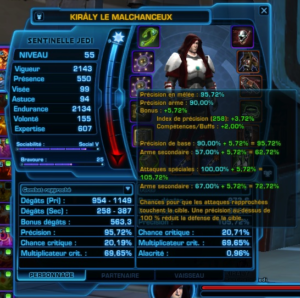 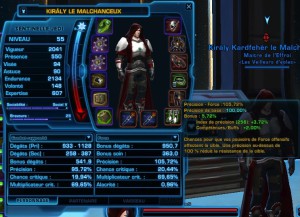 What Bioware calls "basic attack", in fact, is the attack at level 1, the white hit, the thing that does not do much, that does not consume resources (even gives two for them. Knights / Warriors). Which means that ALL other attacks are considered special.

Why are tech and Force attacks already showing 100%, then? Because basic attacks have to be melee or ranged attacks.

After that ? Some of your targets have Defense (in short, dodge). A player, base, has 5%, Consulars and Inquisitors 10%, the majority of enemies you encounter have 0%, and Bosses have 10% (there are probably intermediate variants, by the way). Beyond 100%, the precision lowers the opponent's dodge (and conversely, a high dodge decreases the attacker's precision ... it is quite simply an additive ratio). So, against an Operation Boss, our attacks have 90% accuracy, and the base attack only 80%.

If you want to hit "just about everyone" * with all your attacks (except one), you just have to go up to 100% (110% in real life, since special attacks are 10% more than the basic one, which is the one written on your character sheet).

* Understand all the bugs you come across, right down to the tough guys in end-game content, and the majority of players in PVP.

Is going beyond it useful? This will allow less precise attacks to hit more often. What are these attacks? The basic attack, and attacks from secondary hands (Sentinels, Marauders, Mavericks and Mercenaries).

Are these attacks essential? The basic attack depends on you: do you use it often? Or should I say: often to do damage. The Consulars, Inquisitors, Smugglers and Agents ... really not. Maybe triggers (which you also have with other spells). Knights and Warriors, usually in the "holes" of the cycle, because the attack still grants 2 points of focus / rage. Soldiers and Bounty Hunters: This is sometimes useful, to allow the resource gauge to go up / down.

In any case, this amounts to a small management of the resource, and generally, whether one touches or not, it is not the important thing: your management of resource remains unchanged. Granted, it's always better (especially for damage classes!) To do more damage, but the rest of the combos / attacks / cycles are there for that.

Then remain the attacks in secondary hand. Is it important to allow them to touch more often? Much depends on their damage, and therefore on your equipment already present. And so, I refer you to a future article that will take this issue into account.

But otherwise, having more than 100% accuracy on special attacks allows you to hit 100% against targets with more than 10% dodge. Basically, player-versus-player (PvP) tanks. Ah yes, if, possibly, if a player uses a defensive spell in PvP ... for the few seconds where he gained 100% dodge (for a Thief, for example), you will have a tiny chance, if you have invested a lot in precision. , to touch it.

For those who play almost exclusively on Force or technological attacks… you still need to increase your precision. These attacks do not necessarily affect, under the same regime as the others (melee and ranged). It is true that many dodge bonuses (especially tanks) that can be obtained on a character do not work for Force or technological attacks (the 10% of bosses do work, be careful!), However, we do not. is not immune to failure *.

* I once missed a Force Stasis against an opponent in PvP (a Ravager, probably tank, with an empty resolution gauge). I swear to you that instantly, bah ... it cuts you off ^^

In short, those who claim the 110% of basic precision thus seek to be sure to hit with the basic attack (which we still use not that much, with a variable depending on your class and / or specialization) , and that already seems a lot (too much?). Unless they talk about 110% for special attacks (and therefore start from 100%), which would be legitimate in this case.

But be it, let's move on. Suppose we try anyway. Let's increase our precision as much as possible! I would point out all the same that for 120%, it is necessary to reach + 30%, knowing that the curve of the precision tends precisely towards 30% ... theoretically, this becomes impossible, without a fixed bonus on the side.

But let's try! Imagine a character with the highest level of equipment having increased their accuracy to their maximum. This is a secondary stat found on sophistication (with +94), enhancement (+32) and implant / atrium (+94), no shielding or modification. Knowing that we have 7 sophistications, 14 improvements, two implants and an atrium, we can have:

Come on, we're nice, we have the 1% bonus via inheritance (having finished discussions with a melee tank partner): 106,3 (roughly)

I don't know if you realize, but… 120%? It's just simply unattainable. Not even sure that a doping agent or stimulant can help temporarily reach this level.

And even for those who want to be moderate (and require 110% instead of 120%)… it's bullshit. 110% accuracy, there is ONLY ONE CLASS (and its mirror) that can hope to caress it. And this is to the detriment of all other secondary statistics (alacrité, influx in particular).

Conclusion: I don't think I can be clearer about this debate. Accuracy, go up to 100% with these indexes according to your fixed bonuses next, full stop. It corresponds to this (for level 55):

For somewhat specific cases (you did not put the 3 skill points in the talent, not at level 55 or whatever combination that I did not mention), the Excel table of the first part will allow you to regain your required personal investment.

There you have it, the few additional points will make you hit more often with the basic attack, which remains very limited ... and if, and only if you have two weapons, a little more precision will allow your secondary weapon to hit more often ( I calculated his interest in a future article).

If you are a fan of PvP, to eat the Guardian / Ravager and Shadow / Assassin tank at breakfast… moui, but it is, there too, really to freak out.

See you soon for a future debate to close!

Thanks : Leni, Jolee, and everyone I forget!