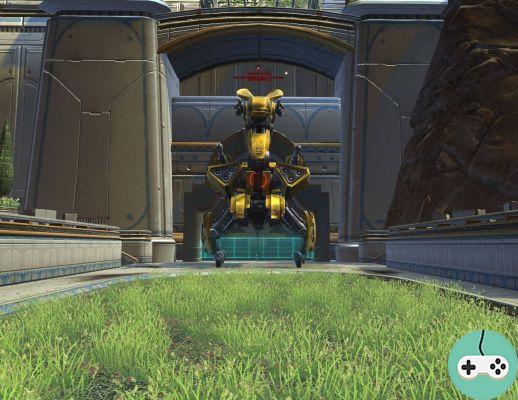 We had not told you too much about it yet, today I present to you Golden Fury, a boss located in the Court of Toborro, a small operation located on Makeb more exactly in the Fortress of the Huts. It is therefore only a single boss with weekly locking (8/16 in normal and 8/16 in hard).

The first part is offered by Sparkk (Bartoch) from the ZEN guild on the Mantle Of The Force server, a small guild with 10 members. To put it simply, we'll say a group of 10 focused on PvE (high-level content completely finished). 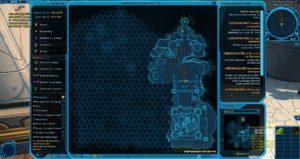 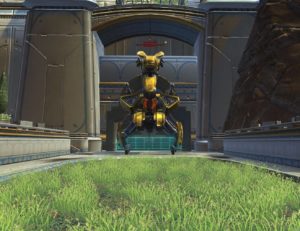 I will directly give the Hard mode strategies, applicable in normal mode. 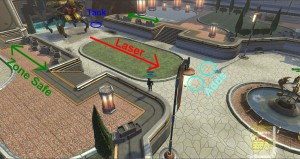 The boss is relatively painful, about ten minutes of combat during which you will repeat your movements and movements. Due to the heavy damage that the boss sends on the Main Tank, it is necessary for him to recover a small tank of Isotope 5 in the room. 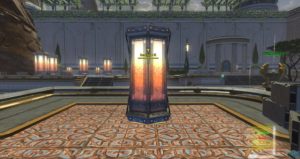 This reduces the damage suffered by 50% and allows to decrease the damage of a huge blue zone that the boss casts on the main tank which is titled Isotope Rejection which brings him down to 50% of his life if the tank is found full life. The Main Tank must continually renew its tanks in order to be under Isotope 5 all the time. The Isotope 5 tank lasts approximately 2 cycles of laser beam on normal and 1 cycle on Hard. I come back just after this famous laser.

To make it easier for relatively weak tanks on the DPS side (nice little taunt = D), arrange to damage the tanks just before the fight. Note that the tank (shadow / assassin or vanguard / specialist) can attract tanks near him, which prevents him from running around the room.

During each DPS cycle on the boss, 2 enemies arrive in the middle of the room. This is when the second tank intervenes. It is necessary for him to take the aggro of the adds in order to allow 2 of the group's DPS to deal with the adds. It is important to specify that the adds cast a spell that is mandatory to interrupt, therefore what applies to the tank is valid for the second tank: remember to take your tank of Isotope 5 before taking the aggro. adds. Once the adds are reduced to pieces, the second tank and the DPS pass back on the DpS boss what they have left before the laser beam.

Speaking of that famous laser beam ...

An alarm sounded, is this war? yes wake up, you are right in it, it's just Golden Fury announcing you in its own way (certainly), that it gets angry and throws you its big laser beam. At this point, all players must move out of range of the radius (safe zone). Nothing could be simpler, the boss shoots straight in front of him, so stand behind the walls at the top of the stairs to avoid the beam which, for your information, will lay you down in 3 charges if you lack responsiveness: / The first laser beam takes 6 seconds to cast. You have just made a first cycle of the boss, do not slack off, the big beast will make your task more complicated than it already is. With each laser beam, the boss charges, allowing him to cast 0.5 seconds less with each laser charge. To make it simpler:

So in the 8th cycle, you only have 2.5 seconds left to hurry up the stairs.

Believe me, when you're right in the middle of the adds, hear the alarm and only have 2.5 seconds to get to the top of the stairs ... it's blazingly fast. Note that the alarm sounds twice, approximately 2 seconds before the start of the boss's casting. So as soon as it starts to sound, run as quickly as possible up the stairs.

During cycles, the boss randomly targets one of the players in the group with an unavoidable purple area. A small CD as well as some care will be enough to keep you without problem. Once the boss has 8 laser beam charge, it will continue its cycles remaining at 8 charges and will give you the option to continue for up to 4 additional cycles. At the start of the 5th, you will suffer the boss's rage. So ask your DpS to send everything they can ... 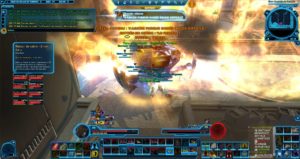 Below 20%, the boss goes into a kind of trance, he makes continuous zones on the whole group and continues his damage on the main tank. Therefore, it is necessary to all gather behind the boss with the tank always facing him. Big phase of DPS burst.

I hope I have been clear enough in this little guide which I hope will allow you to be able to drop this boss.

After the rumors on their server about the fact that it was necessary to be full 72 to fall this boss, they still decided to do a few tests, and it turned out to be conclusive with an almost full 69 group!

Summary of their strategy

It is accessible to everyone since there are very few mechanisms, it is a health bag where the slightest mistake is fatal. Our group consists of 3 tanks, 4 healers and 9 Dps. However, 2 well-equipped tanks may be enough:

Special feature of hard mode:
The boss gains 1 charge for each laser reducing his charge time by 0.5 sec for a maximum of 8 charges. It will therefore go from 6 sec to 2 sec of casting at the end. Isotope5 shield time is reduced, forcing tanks to destroy a vat with each laser, we advise you to lower them to the lowest before starting the fight.

Droids cast a spell as soon as they appear and then every x seconds. This must be broken otherwise you will surely lose a member of your raid.

For the last phase, we decided to come together to optimize the care but are not yet sure since we only saw it on the successful trial!

There you go, you now know everything about this boss!