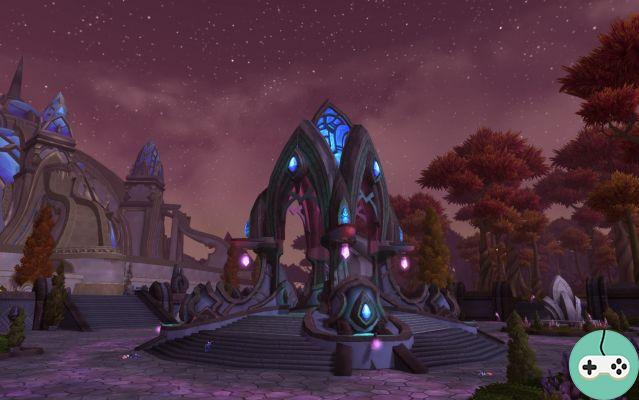 I found all the information given on the modification of the equipment slightly confusing. It must be said that Twitter is not necessarily the most suitable for speaking in 140 characters on such a vast and complex subject.

The developers have heard me (let's say!) And are giving us a great summary tonight of all the changes that will be made to this subject in Warlords of Draenor. Of course, as they specify in the introduction, everything can change by the time of deployment!

I could summarize the subject for you, but if you want to understand the whole thing, it is clearly better to read it all. For once, I'll copy the source directly to you here.

Now that BlizzCon has passed and Warlords of Draenor has been unveiled, we're getting questions about the gear changes planned with the expansion. To help you see more clearly on this subject, here are some explanations.

Keep in mind that, as with everything in development, the details announced today will likely change as we move forward with the project. However, they should enlighten you on our goals and our approach.

One of our first goals for Main Traits is to make sure that the higher item level (ilvl) pieces brought in by the new content are always better than the old ones. The main stat changes will also help make rooms more universal, so that groups find more use in their loot: you will disenchant less plaque with intelligence (only useful for paladins at this time) or mail with agility (which is only of interest to hunters or shamans Improvement today).

As announced at BlizzCon, our solution is to introduce changing main characteristics according to your active specialization, although it is very likely that only new equipment arriving with Warlords of Draenor will be able to function according to this principle due to technical limitations on the current content. Here are some more details about the evolution of the main features:

Armor pieces can have three other random properties.
First, they can be of a higher item level than expected. For the purposes of this discussion, let us call such items as forge wars.

Then, the items will be able to carry sockets, which will be more powerful in Warlords of Draenor than those present in the game currently. There will be no socket bonus, but we are strongly considering requiring a certain color for each. All gems will grant secondary characteristics, including spirit and bonus armor (see below).

The goal is to make finding objects more interesting and to improve longevity. Rather than waiting weeks to find a breastplate, you might get the correct one fairly quickly; but getting yourself an item that is truly the best for the location will take more time and effort. Here are some details:

Similar to the main characteristics, the set bonuses will change depending on the active specialization. A paladin might therefore only need a set of a certain tier, rather than one for Holy and one for Retribution. In addition, the bonuses can be adapted more precisely to each specialization: for example, the one for Precision hunter can give different properties or values ​​from the one for Survival. And like today, not all helmets, breastplates or other pieces of armor will necessarily be part of a set.

Most of these pieces will not carry strength, agility or intelligence, but for example attack power or spells to be more universal. However, for the moment, we intend to leave some main characteristics on the weapons so that they retain their symbolic and special side. Items will also often provide stamina.

The advantage of including the spirit and the armor bonus in the possibilities is to ensure that certain items only interest healers or tanks, and that the latter therefore do not suffer from the competition of the many DPS present in each group. Another advantage is that these characteristics bring a more personal side and more subjective needs. For example, one tank might prefer more armor bonus and another more haste.

As for the spirit, you have to say that having spirit on each non-armor slot would give you more mana regeneration than you really need, which means that it will not be essential to have it. spirit on each piece worn to do its healing work.

The armor bonus will take the place occupied by dodge and parry now. Dodging attacks is an interesting mechanic in the tank game, but as a gear strategy it's not the most effective. However, we want to keep a characteristic dedicated only to damage reduction, and that will be the armor bonus.

Non-armor pieces will also have a chance to wear one of the additional properties mentioned above (war forge, gems, tertiary characteristics), and the same principles will apply.

Let's also say that this player has, for his healing set, a ring and a shield with spirit, and a jewel whose effect is triggered by healing spells. The jewel is almost useless for the Retribution set, as is the shield because the SME Retribution is made to be played with a two-handed weapon. The ring might not be fantastic as the spirit does nothing for a Retribution paladin, but if it has another interesting characteristic (e.g. haste) it can remain passable (again, it all depends on the optimization level sought by the player).

A more casual player may be content to keep the gem and use a lower item level two-handed mace when going into Retribution. But a player focused on optimizing will likely be looking for different rings, cloaks, jewelry, necklaces, and weapons for the two specializations. And a highly optimized player, for example someone engaged in the global Mythic Raid Race, will also wish to have helmets, shoulder pads, breastplates, etc. different depending on the desired combination of secondary characteristics. It could even take different gems depending on the specialization.

All of this may seem like a lot of new information to absorb all at once, but we'll continue to follow your comments and answer your new questions as much as possible.
And again, keep in mind that, as with everything still under development, the details announced today will likely evolve as we move forward.
As always, all of your constructive comments are welcome, and we look forward to hearing your thoughts on it.

Have you read it all? What do you think ?